One particular WrestleMania match left Undertaker feeling disgusted. With tonight being MITB, does WWE have a big spot planned for the pay per view?

The Undertaker has competed almost 25 times at WrestleMania and one match left him feeling disgusted. Also, do not be surprised if there is big spot planned for Money in the Bank.

Undertaker has produced some of WWE’s first and most legendary matches during his 30 year reign. Unfortunately, that was not the case at WrestleMania 33.

Once again, Undertaker and Roman Reigns found themselves in the main event of WrestleMania. Unlike previous times, they were battling each other.

Taker : “will you maintain kayfabe kid”

— Undertaker out of character moments (@RareTakerMoment) May 7, 2020

Minutes into the match something did not seem right about Undertaker. Then, he was speared through the announce table and never seemed able to recover.

The next two 20 minutes was far from special. Undertaker even told ESPN that he was disgusted with his performance.

“That was one of those times it was tough having the cameras there,” said Undertaker. “That was the first time that I watched that match back. I was so disgusted with it that I didn’t want to watch it back.”

“I was so disappointed for Roman. Even after Brock Lesnar beat the streak, for guys coming up to have a match against The Undertaker at WrestleMania — especially where Roman was at — it was important for his career. Especially, because he was going over.

“For me, in that role, I wanted to do the very best that I could do for Roman. I think the world of him. You want to be able to do the best you can for him, and you know you have no business being in the ring.”

After losing, Undertaker removed his gloves, coat and jacket. He left them in the ring, seemingly signaling the end of his career.

But, that was not the case, as he returned the following year to squash John Cena. He missed the next WrestleMania and then returned for the most recent one.

To conclude night one of WrestleMania 36, Undertaker defeated AJ Styles in a Boneyard Match. Overall, the match received universal praise from WWE staff and fans.

Between those WrestleMania matches, Undertaker has made a few appearances.

Some have gone horrible like against Goldberg. Then, others shined like when he teamed with Reigns to defeat Shane McMahon & Drew McIntyre.

WWE will be airing part one a documentary series that followed the Undertaker for the past few years. It is called The Undertaker: Last Ride and airs immediately following tonight’s Money in the Bank pay per view. 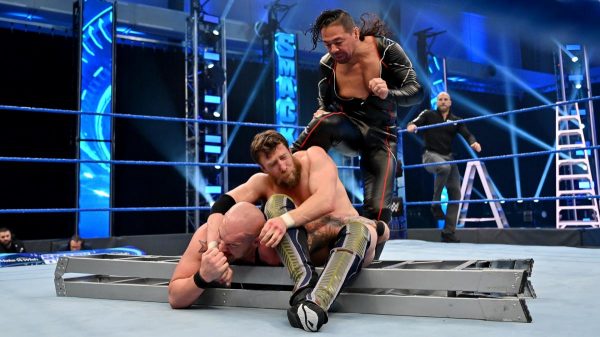 This year is quite different from all the rest. Of course, that involves COVID-19 and the destruction it has left behind.

The men and women’s matches take place at the same time. Also, the bout starts on the ground floor of WWE Headquarters with the briefcase dangling from the roof.

While we will have to see what WWE taped and makes it to air, there is speculation of a major spot. Apparently, there might be a bump where someone falls off the roof of WWE Headquarters.

Of course, WWE made sure the person was well protected. And, they could have always use CGI and camera angles to get the right shot.

In the Wrestling Observer Newsletter, they noted how Vince McMahon spoke to an unnamed talent about how to take the fall. On top of that, McMahon apparently took the bump as well.

While there will likely be at least one major bump, expect more. With WWE going the cinematic route, tonight’s MITB will be one of a kind.