Shayna Baszler’s push might already be over, even though she has only been on the main roster for a few months. And, Kurt Angle will be returning to WWE TV next week as he appears on the NXT brand.

Shayna Baszler was given a major push in NXT. Fans were waiting over a year until she brought that dominance to the main roster.

After a lengthy stay, Baszler finally joined the main roster at the Royal Rumble in January. She did not win that night, but recorded the first clean sweep the next month at the Elimination Chamber.

Then, RAW Women’s Champion Becky Lynch vs. Baszler was set for WrestleMania 36. The match was planned a year in advance with Baszler as the favorite.

The unthinkable happened as Lynch retained her title. It was probably the biggest upset from WrestleMania 36.

Paul Davis of WrestlingNews.co noted that Vince McMahon is not sold on making Baszler a top heel. Although, that could change.

“I was told that Baszler will eventually move into the title picture this year,” said Davis. “But, McMahon is still not 100 per cent sold on her as a top heel.”

While McMahon might not be certain, Paul Heyman is a fan. The Executive Director of RAW is looking to give Baszler a push like her friend, Ronda Rousey.

Apparently, the original plan was for Baszler to win Money in the Bank (MITB). Then, she would cash-in on Lynch to secure the gold.

But, Lynch’s pregnancy made WWE change directions. Instead, the company had Asuka win the briefcase.

The next night on RAW, fans learned the truth and Asuka was promoted to champion. She looks set to battle Asuka at MITB.

As for Baszler, she has not major program at the moment. In addition, she is not booked for Backlash.

If WWE does decide to make Baszler champion, a battle with Asuka seems fitting. Those ladies helped elevate the women’s division in NXT. 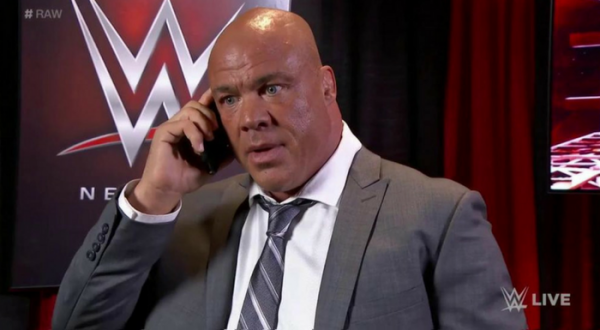 Last month, WWE had to make a tough decision. Due to COVID-19, the company let 40% of their employees go.

Many of the names were not known, but those on TV were familiar to fans. Arguably the biggest name released was WWE Hall of Famer Kurt Angle.

Now, Angle is being advertised for next week’s NXT TV. He will be the special referee for the cage match between Matt Riddle and Timothy Thatcher.

As of now, there is no word if this is a one time appearance for Angle. Brining Angle to NXT should increase the ratings, which might be low as this Wednesday will be the fallout from All Elite Wrestling’s Double Or Nothing pay per view.

BREAKING: @RealKurtAngle will serve as the special guest referee for @SuperKingofBros and Timothy Thatcher’s #CageFight this Wednesday night on #WWENXT! https://t.co/RZoHaH9aDY

Even if Angle is only returning for one night, it might a good sign for his future. Once the world somewhat returns to normal, ideally WWE will bring back many employees.

Angle has always been popular with fans and this surprise NXT appearance means WWE has not forgotten. If you like to bet, do not be surprised if Angle makes another full-time WWE comeback.