Less than one day after WWE donated $18.5 million through a Presidential Super PAC in Florida, they were deemed as an essential service and people are mad. 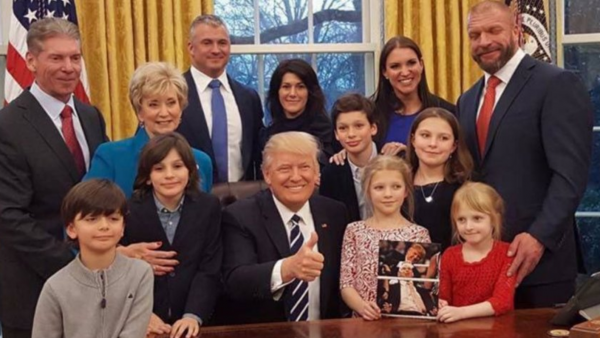 Right now, many places around the United States are closed due to the coronavirus. Apparently, that does not include WWE.

Recently, they were deemed as essential service by Florida Governor Ron DeSantis. Therefore, WWE can now hold live shows out of their Performance Center.

The decision has been met with criticism. That only increased after Linda McMahon promised Florida $18.5 million through a Presidential Super PAC.

At a press conference, DeSantis stood his ground. He compared his decision to let WWE operate to Disney, despite them closing their parks.

“Disney asked for some of the gardening people to go because they have millions of dollars worth of stuff there and it’s just gonna go bad,” said DeSantis. “I said, ‘is there gonna be social distancing?’ They said, ‘yeah they’re just gonna go out there and work themselves.

“Obviously WWE, there’s no crowd and it’s just a very, very small group of people. We just look at it at a case by case basis.”

“We haven’t had a lot of requests. I think a lot of this will be ‘What do we look like in May with some of this rather than ‘can we do stuff?’ The one thing I support is, I think that we do need to support content especially sports and events.”

“I think people are starved for content, we haven’t had a lot of content since the beginning of March. If people are being told to stay by the house this is something for them to do.”

Despite hosting live shows, fans are still no allowed in attendance. Also, WWE must follow certain guidelines from a permit they received.

Still, this has not stopped people from expressing their anger. At RAW, the police showed up several times after complaints from concerned citizens.

WWE does have a good relationship with Donald Trump. Do not forget, Trump once shaved Vince McMahon bald at WrestleMania 23.

Although, the timing is questionable. Only one day after the $18.5 million donation, WWE was deemed as essential.

And, on top of everything, an on air talent tested positive for the coronavirus.

Let’s sharpen this a bit.

.@StephanieCNews and I pieced together this timeline regarding #WWE:

People are just now making the connection between the WWE being deemed essential and Linda McMahon’s involvement with the current administration?!?! 😂😂😂 pic.twitter.com/i8ZyjNGgUl

#WWE now considered an “essential business” in Florida. Gives the appearance of conflict of interest since @Linda_McMahon wife of the @WWE CEO runs a @realDonaldTrump SuperPac! Will resume tapings despite employee testing positive for #coronavirus https://t.co/8zRvZFzDPr #WWERaw

A Super Pac run by Linda McMahon to re-elect Trump has vowed to spend millions in Florida may be the answer you are looking for. https://t.co/HDBPNK5fv9

Rarely are there coincidences in politics.