For the first time in 36 years, WrestleMania was divided into two nights. This was done to help WWE produce 20 matches, despite most of the United Sates having social distancing rules.

Triple H was on After The Bell with Corey Graves and spoke about WrestleMania being two days going ahead. Apparently, WWE’s COO is down with the change.

“I do think that’s probably a change that that out of chaos comes the genius and maybe that is the genius of it,” said Triple H. “And I know there’s been people saying that for a period of time, but that’s a major shift and it doesn’t come easy.”

“I think people in the world look at stuff like that,” said Triple H. “They go, ‘why don’t they just make it two nights?’ Yeah, because that’s really easy. There you go two nights.”

One of the issues would be WWE changing up their typical lineup. Over the course of four consecutive days, WWE has lots to produce.

There is SmackDown, NXT Takeover, Hall of Fame, WrestleMania and RAW to worry about. Expanding WrestleMania an extra day would change the landscape of an already packed four days.

As for the future of WWE, that is still somewhat in the air. They are now considered essential business in Florida and have more options.

They will be taping live TV twice a month, with the other half being taped. Also, they are taking precautions to keep their employees and the Performance Center safe.

We already know Money in the Bank will come from WWE Headquarters and likely the Performance Center. As for SummerSlam, that is still listed for the TD Bank.

Like most events, they have been postponed or cancelled. Therefore, there is no word on when WWE fans can once again attend show. 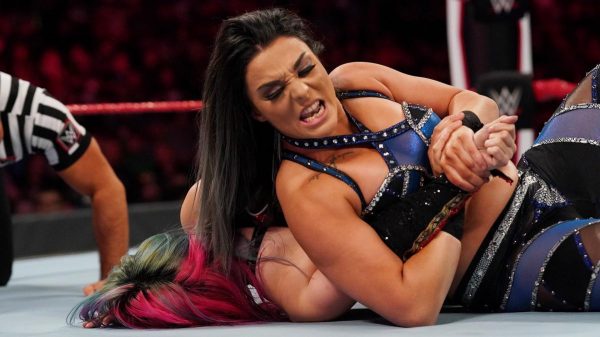 Due to COVID-19, WWE had to make some big decisions. This included letting go of 40% of their staff.

Talent have 90-day non-compete clauses in their contracts, although some could still work on WWE TV. As for Purrazzo, she is already looking for another promotion to join.

“I guess, ideally, like, I haven’t been to AEW yet,” said Purrazzo to SportsKeeda. “Britt Baker is my best friend [and] she works there. They have a kick-a— women’s division now.”

“It’s a lot of people I’ve never worked with and it’s a brand-new product,” continued Purrazzo. “So, I would love to experience that and be part of it.“

The problem could be that All Elite Wrestling (AEW) is facing a challenge. Like most pro wrestling promotions around the world, few shows are being produced.

AEW is always looking to sign the best as they add names to their roster. Purrazzo is not the most known person looking for a job, but that would also lower her price tag.

During the interview, Purrazzo also praised Impact Wrestling. She discussed working with the likes of Tessa Blanchard and Kylie Rae.

Before being let go, Purrazzo worked mostly on the NXT brand. Over the past few months, she competed on RAW but was never not considered a member of the main roster.

After taking part in the inaugural Mae Young Classic Tournament, she signed a developmental deal in May 2018. While she usually ended up losing on NXT TV, she had been heavily featured in 2020.