WWE’s ratings always go up and down, depending on several reasons. Right now, the viewership for RAW, NXT and SmackDown as been dismal.

There are two likely reasons. And, neither are something WWE or Vince McMahon can control.

First, the summer months are quickly approaching and WWE usually witnesses the numbers drop. Second, there is the COVID-19 pandemic that is causing chaos around the world.

Like everyone, WWE has been dealing with the virus. They stopped airing live shows and have not filmed with a live audience in over a month.

Since WWE is considered essential business in Florida, they are able to keep the Performance Center running. In that empty arena, they have been doing their best to deliver content.

So far, mostly everything has been taped. But, that changes as WWE resumes producing two live shows a week and countering with taped content for other weeks.

During an investors call, Vince McMahon seemed to blame the low ratings on his current talent.

McMahon’s Reasons For Ratings Being Low

“[Raw] has suffered, but not necessarily because of the environment,” said McMahon. “It’s suffered because we bring in a lot of new talent and it takes a while to get new talent over.”

“How you use those performers in this story or that story,” continued McMahon. “I’m convinced the Raw ratings will bounce back considerably.”

He continued that a new crop of talent have been appearing on TV compared to familiar names. He even mentioned Brock Lesnar’s name, who lost the WWE Championship to Drew McIntyre at WrestleMania 36.

“We no longer have Brock Lesnar, but we have a new champion and a lot of new performers coming in,” said McMahon. “That’s the reason.”

As for SmackDown, McMahon noted that little changed on that brand. Triple H runs NXT, so McMahon does not have much to say about them.

The past few months have been rough on McMahon. The year started with Co-Vice Presidents George Barrios and Michelle Wilson being forced to leave.

Then, COVID-19 started to wreck havoc inside the United States. In the sports world, one of its early casualties was the XFL.

After only five weeks, the relaunch was cancelled and the company is up for sale. Plus, McMahon has been hit with a lawsuit by former XFL Commissioner Oliver Luck.

WrestleMania then went from a huge stadium to the Performance Center. Finally, WWE cut 40% of their employees earlier in the month.

Apparently, McMahon has been in a sour mood backstage and it is easy to see why. 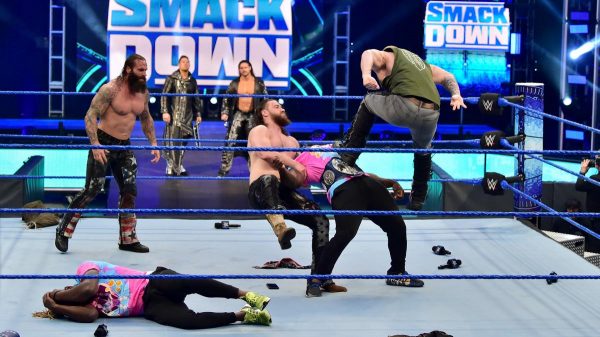 The overnight ratings for SmackDown are in and they are nothing to brag about. The showed, which featured celebrating Triple H’s 25  years in WWE, averaged 2.014 million viewers for two hours.

The number is down almost 8% from last week’s 2.187 million viewers. This would make Friday’s episode the lowest since joining FOX in the fall of 2019.

Boy that ending to #SmackDown was awkward and uncomfortable to watch.

I will laugh my ass off if the ratings still plummeted despite tonight’s episode being all about Triple H being a part of the company for 25 years on top of him showing up to the show.

For anyone curious, Here’s the live tv ratings for the big 4 shows this week #WWE #AEW

Several shows toppled SmackDown, with the NFL Draft taking most of the audience. The high score from the NFL Draft should come as no surprise.

Like the past several weeks, SmackDown came from the Performance Center with no live audience. Also, only a handful of main roster wrestlers competed.