Gail Kim recently accused the WWE of telling her to be 'more white.' Also, Edge and Randy Orton have been accused of bullying Amy Weber.

Gail Kim notoriously said the WWE is racist. She even talked about trying to be “more white” so she would receive more opportunities.

In other news, Edge and Randy Orton are accused by a former female wrestler of bullying. Let’s look at her accusations. 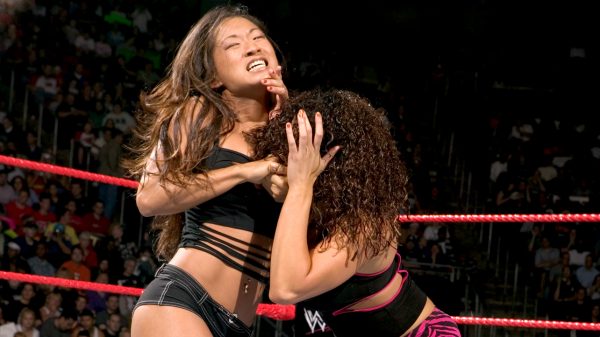 Gail Kim is one of the success stories from Impact Wrestling, formerly known as TNA. At one point, she was also in the WWE, but her journey there did not go without problems.

During an interview with Lilian Garcia’s Chasing Glory, Kim elaborated on her time in the WWE. She admitted that she tried to be more white so she would get more opportunities.

“It got to a point where I’m like, ‘Am I too Asian?’ I was literally highlighting my hair near the end to become more white.”

Unfortunately, Gail Kim was in the company at a time where “Divas” did not get much attention. They only got very short segments and nowhere near got the limelight women get today.

Kim did not let her experience with the WWE stop her. No, she continued to have a really successful career at Impact Wrestling (formerly known as TNA).

Currently, she works behind the scenes for Impact Wrestling developing future talent.

Randy Orton and Edge have to deal with some serious accusations at the moment. According to former female wrestler Amy Weber, she left the company after being bullied by both men.

Weber describes an incident on a plane which involved both Orton and Edge. Amy claims Orton knocked her out of her seat and said “you will learn b****”, after which Edge poured a drink over her.

Randy’s reputation when he was younger is widely known, but so far there have been little stories about Edge bullying other people. So, the bullying allegations outraged many fans out there.

Amy Weber video so good people really need to get called out for their bullying.

The bullying accusations from Amy Weber are not the first levelled at the company’s address. In fact, The Miz and Mauro Ranallo both accused JBL of bullying.

Now that another story about bullying has come out, I urge the WWE to look at the unhealthy atmosphere in their company again. Bullying may not be as present anymore, but it still needs addressing.

In addition to preventing bullying in the future, the WWE should investigate the case of Amy Weber. While it happened years ago, this kind of behavior must have consequences if it happened.

At the time of this article, there is no official statement from Randy Orton or Edge that counter the bullying accusations from Amy Weber. If the allegations are true, I urge both men to apologize about their appalling behavior sooner rather than later.