The CDC indicated WrestleMania can't happen based on their recent comments. Also, what was the initial plan for Triple H on SmackDown?

At a more normal point in time, such a question might seem crazy. These, however, are not normal times, and the question has to be asked: can WrestleMania even happen?

Last week saw a rash of major sports cancellations and suspensions. The NBA and NHL each suspended their seasons indefinitely. Major League Baseball cancelled Spring Training and delayed the start of the regular season.

In perhaps the biggest move yet, the NCAA went from holding March Madness games in empty arenas, to cancelling the annual mega-event completely. WWE has cancelled some of its own live events, but notably held SmackDown Live on Friday from the Performance Center, in front of an audience of none. As of now, that is the plan for upcoming shows, including tonight’s Austin-themed RAW.

Of all the major cancellations and delays, the large sports entertainment event is notably absent. Officials in Tampa did meet on Friday to discuss strategy. At that time, they did not move to cancel the event, but indications are that such a decision is still very much possible.

With recent statements from the United States Center For Disease Control, such a decision may have been rendered moot. The CDC has recommended limiting public gatherings to sizes of 50 or fewer…for the next eight weeks, at a minimum.

New: Starting immediately and for the next 8 weeks, CDC recommends cancelling all events of 50 or more people. Full recommendation here: https://t.co/LrjUt4rl7B #COVID19 pic.twitter.com/OroIqhTYJo

Of course, if you check your calendar, WrestleMania is in less than a month. It is also usually substantially larger than 50 people. When you combine that edict with the present travel bans in place, it seems it is only a matter of time before WWE formally cancels or delays their biggest show of the year. 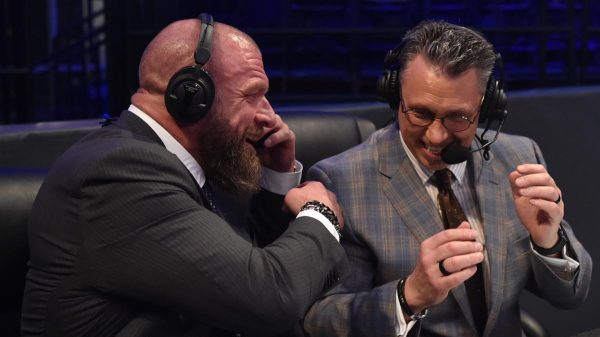 You should know by now that the most recent SmackDown was a unique show, to say the least. In the midst of changing public gathering restrictions, WWE had shifted the blue brand show to an empty Performance Center, with Superstars working an empty arena. Triple H opened the show with a brief monologue and then joined Michael Cole on commentary for the opening segment.

According to Fightful Select, that was as far as plans for Hunter were to go. Of course, if you watched the show, you would know that Hunter stuck around for the entire show. Fightful explains that, while initial plans had Triple H for the opening segment and gone, the decision was made on the fly to keep him around. He had entertaining chemistry with Michael Cole and social media response to his appearance was quite strong. As such, WWE decided to keep him on for the whole show.

If you tuned in, you not only saw him on commentary. He also did time as a camera man and as a makeup artist.

These are interesting times for everyone, and if WWE is going to keep running these quaint shows from the Performance Center, they may show a willingness and ability to make more adjustments on the fly.