Matt Riddle has been one of the rumored NXT superstars to appear during the Royal Rumble. And, even the superstar himself is very keen.

Matt Riddle will not be overlooked by WWE’s management, at least not if the superstar himself has anything to do with it. With the Royal Rumble drawing near, the NXT wrestler posted a vague threat on social media.

If I’m not in the Royal Rumble this year I’m probably going to do something that you won’t be happy about, bro! #brover #stallion #mattriddle #ob #originalbro #kingofbros #nxt #wwe #riot pic.twitter.com/pWNPFxMB2F

Matt Riddle is not exactly known to mince words, and that is one of the things we love about him. In his usual style, Riddle made his intention for the Royal Rumble very clear. The message is clear, he wants to be included, or else!

Many names have been put forward from NXT for the Royal Rumble and Matt Riddle is certainly one of them. At this point, I would be seriously surprised not to see him during the pay-per-view. Still, you never know what Vince and other upper brass are thinking.

Riddle could be building some hype for the Rumble and he might be included already. If he isn’t, then the tweet might not go down well with the management of World Wrestling Entertainment, as it could force their hand. Either way, fans seem to be excited by the prospect of Riddle at the Rumble. 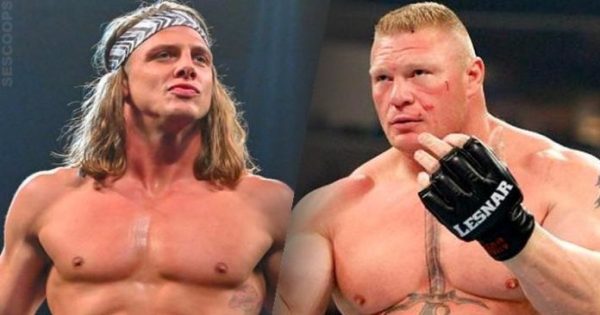 Ever since Riddle came to the WWE, fans have been asking for him to dethrone Brock Lesnar on the main roster. The match-up would not come a total surprise, as both men have an extensive UFC history. While their personalities could not be any more different, this is what makes this potential match-up interesting.

When you think about the fact that Brock Lesnar will be the first entry at the Rumble, it would make sense for Riddle to make his appearance and eventually end up eliminating Lesnar. Having said that, there is so much left to do for Riddle on the black and gold brand.

If Riddle were to be called up so quickly, and without winning a title, it would not be unusual.

Alexa Bliss was one of the women who was put on the main roster without winning anything substantial on the NXT roster. However, once she made her way to the main roster, she won one title after another. She actually became quite the dominant champion, even though she still needed some work in the ring. Alexa grew on the main roster and the same could apply to riddle.

When it comes to WrestleMania, there does not seem to be an opponent in place for Lesnar. So, it is possible that the company has some plans for Riddle. On the other hand, it does not explain why Riddle put up the tweet. Either they do not plan on including him, or there are some plans and Riddle is simply increasing the hype.

It is unusual for me to be excited about a Brock Lesnar match, especially at WrestleMania. However, Brock has made more appearances lately and a potential feud with Matt Riddle is something I could get behind. If this particular storyline is in works, I would assume we will find out at the Royal Rumble.