Along with his wife, three daughters, and Walter, Jeff Dunham showcased his family's skills on an episode of "Family Feud" with host Steve Harvey.

Jeff Dunham isn’t just a talented ventriloquist, he’s also a family man and the father of five kids! Along with his wife and three daughters, Dunham showcased his family’s skills on an episode of “Family Feud,” but in typical fashion, he brought someone else along, too.

While there wasn’t an extra spot for Walter to be a contestant, our favorite curmudgeon was there to introduce the family and of course to make jokes at Steve Harvey’s expense. Walter brought his usual amount of charm to the show. 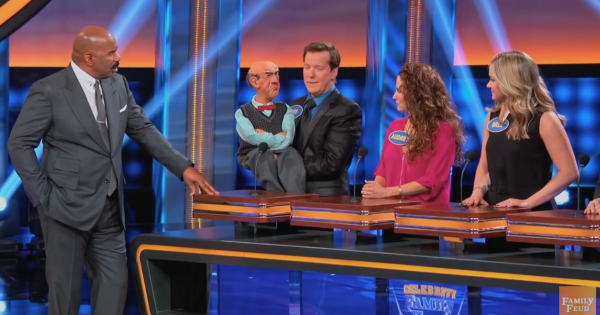 Steve said about Walter, “ Why am I talking to him like he real?” The grumpy old puppet said he wondered the same thing about the “Family Feud” host. Walter was on his worst behavior when he was previously a guest on “The Steve Harvey Show,” so Steve knew exactly what he was getting into when an invitation was extended for this family to appear on the show!

Watch the video below to see Walter poke fun at Steve Harvey before introducing the Dunhams on “Family Feud.”

The actual show was no joke for the Dunhams who faced off against actress Ming-Na-Wen’s family.

They cleaned up for their charity Baby 2 Baby as Jeff and his daughter Kenna headed to the Fast Money round.

Jeff Dunham proved to be quite competitive on “Family Feud.”

The funny ventriloquist was so determined to raise money for his charity that he was completely serious as he quickly answered Steve’s questions in epic fashion.

It’s a different side of Jeff that his fans likely haven’t seen before, but when money is on the line for a good cause even Jeff Dunham can get serious!

That was awesome! Jeff and Kenna cleaned up! Jeff is clearly a proud dad of these three girls.

He and his wife also have twin sons who Walter has even babysat before! Maybe they will be back on the show when their boys are older.