The classic Johnny Carson segment featuring Doc the ape from "The Tonight Show" might be one of the funniest moments in the show's history.

When animals are guests on television shows, you never know how they are going to react. It’s impossible to explain to them why they are in front of a live audience and under bright lights. Johnny Carson learned this the hard way by having animals on “The Tonight Show”, including one particularly feisty ape named Doc.

Over the decades, Johnny had many animals on the show. Most times, it wasn’t dramatic.

There would be the occasional animal that took a serious liking to Johnny, as the baby gorilla in the picture below did. 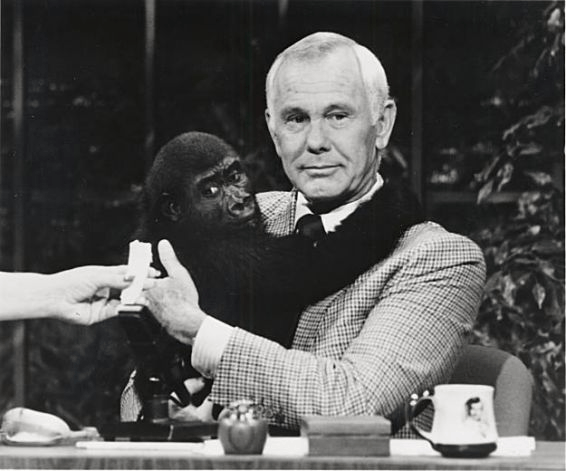 In 1982, Jim Fowler brought a small Celebes ape on “The Tonight Show.” This little fellow was incredibly rambunctious.

Johnny always liked having animals on his show, but this primate named Doc tried to push his boundaries!

After jumping all over the place, Doc tried to push Johnny away. When Johnny stayed put, Doc punched him right in the kisser!

You can even hear Johnny say, “He punched me right in the mouth.”

The video below of Doc’s visit to “The Tonight Show” is so funny. Doc was just being an ape and Johnny took it all in stride! Watch for yourself:

This is a great example of why Johnny Carson is still viewed as the “King of Late Night TV.” He didn’t run away or cower in fear. He rolled with it!

More Animals On “The Tonight Show”

When you’re working with animals, you have to be ready to go off the cuff because things might change quickly!

What made Johnny such a great host is that he reacted with humor rather than with fear!

“The Tonight Show” episodes with animals really helped showcase Johnny’s comedic genius. He could turn anything into a joke, even when he was legitimately scared.

In the video below, a big cat takes a swing at Johnny when he tries to show it that he’s not scared.

This sudden snap from the cat shocked Johnny and he responded by running into Ed McMahon’s arms!  His quick thinking turned his fear into a grand joke.

Watch this video for a good laugh! This big cat clip is a real classic!

Share this if you still love classic “Tonight Show” episodes!