For roughly 20 years, Mark Henry—aka The World’s Strongest Man—has been using his strength and power to win matches and provide entertainment to the world. With recent news speculating that Henry will retire in 2016, this week’s Flashback Friday will be dedicated to him.

Prior to joining the World Wrestling Federation (WWF) in 1996, Henry’s strength was never a gimmick. Standing tall at 6’4″ and weighing 400 pounds, he was a National champion in powerlifting. Henry’s record for the squat is 953.5 lbs., while his record for the deadlift is 903.9 lbs. As a result, lifting up wrestlers was like picking up a pen when he made the transition to the WWF.

Henry’s career in professional wrestling was reminiscent to one being shot out of a cannon. At 24 years old, he signed a 10 year contract with WWF—the first person to do so—and faced Jerry “The King” Lawler in his first career match at the pay-per-view event Your House: Mind Games . Henry won his first match, and although he was set for a decade, life in professional wrestling didn’t come easy for him.

The World’s Strongest Man became a regular wrestler on RAW but his first big storyline came with The Nation of Domination. His involvement with the faction was short-lived, but it helped create a feud with The Rock and a partnership with D’Lo Brown. Henry eventually turned on Brown during a WWF Intercontinental and European Championship match between Jeff Jarrett and him, and was awarded the European Championship by Jarrett, due to his generosity. It’s not the typical way one wins their first title, but it led to a great storyline that’d he would be remembered forever for.

Turning into a fan favourite, Henry would become involved with Mae Young in an on-screen relationship. The two created many hilarious and embarrassing moments that are still worth watching. Mae Young was an incredible performer and Henry was able to show his comedic side with his “Sexual Chocolate” character. From Young getting pregnant, to giving birth to a hand, Henry’s relationship with Young is one of the things he’s most remembered for in professional wrestling.

After being on such a high from his on-screen relationship, the lows of Mark Henry’s career were just around the corner. Although he was getting valuable time on RAW, WWF sent him down to Ohio State Valley Wrestling to work on his conditioning and wrestling skills. Being in developmental for roughly two years, Henry returned to SmackDown, but again, there wasn’t much success with his character. Henry was working as a mid-card wrestler for a few years, with nothing ever picking up steam. After tearing his quadriceps in 2004, the time off seemed to work because when he returned in 2005, he came back as one of the bigger stars in the business.

After feuding with Batista, who was the World Heavyweight Champion at the time, Batista got injured, which resulted in the belt coming vacant. As a result, WWE issued a Battle Royale for the vacant title, in which Kurt Angle eliminated Henry to win. The two were involved in a feud, but Henry was never able to win the title from him. Although he was never able to win the title from Angle, Henry was given a great opportunity facing The Undertaker at WrestleMania 22 in a ‘Casket Match,’ attempting to beat the streak.

Henry wasn’t able to win against The Undertaker, but being involved in a match of that calibre at WrestleMania showed how much WWE thought of him. Following his Undertaker feud, Henry began a path of destruction, ‘injuring’ many superstars along the way. Unfortunately, Henry was the one who became the most seriously hurt, when an injury cost him roughly 10 months away from the ring.

When Henry returned from injury, he looked strong squashing many opponents along the way, but he was never able to get past The Deadman. Stuck in another feud with him, The Undertaker continued to defeat him on multiple occasions, thus leaving Henry in the dark. Although WWE programming was once again becoming a struggle for him, ECW was his saving grace.

After winning his first and only singles title roughly 10 years prior, Henry was finally able to regain another championship. Defeating Kane and Big Show in a Triple Threat match, Henry captured the ECW Championship in his ECW debut. Although Matt Hardy defeated Henry to win the ECW Championship not too long after, it was great to see Henry finally win a singles title, after going so long without one.

After being traded to RAW, Henry turned face and began wrestling in many tag-team matches. In a pursuit for the WWE Tag-Team Championship, Henry and his partners were never able to find success. Even as The World Strongest Man, he wasn’t to win the tag-team championship and was once again wrestling without a title. After being involved in professional wrestling for so long, Henry was never being booked to win a major title, until that changed in 2011. 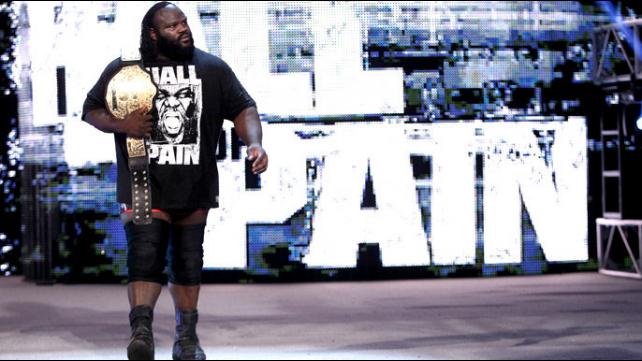 For 15 full years in WWE, Henry seemed to crawl up the ladder, but never reach the title. He had won a European Title, by default, and an ECW Championship. He never wore true WWE gold around his waist, but that was about to change in 2011. For someone who weighs 400 pounds, it would make sense for his character to be a destructive force, however Henry was usually booked as a babyface. He was a loveable teddy bear that fans supported, but it was his tempered side that finally gave him success.

Henry was able to hold the championship for a few months, but along the way one of the craziest moments in Henry’s career happened. In a match against Big Show at Vengeance, a Henry suplex to Big Show made the ring collapse. With almost 1000 pounds of forcing hitting the mat, it was one of the most exciting moments within Henry’s career.

After losing his championship to Big Show, Daniel Bryan cashed in his Money in the Bank briefcase to win the title. As a result, Henry feuded with Big Show and Bryan for the World Heavyweight Championship, but wasn’t able to regain the title. Henry would then face CM Punk for the WWE Championship, but after also being unsuccessful there, an injury almost cost him his career.

Returning from injury once again, it looked like Henry would be retiring. After feuding with Ryback and Sheamus, it felt genuine that The World’s Strongest Man was going to retire on the June 13, 2013 episode of RAW. He cut a heartwarming promo saying “Baby, I’m coming home,” and then in the midst of celebrating with John Cena, he delivered a World Strongest Slam, thus halting his retirement.

After receiving a title shot due to that incredible promo, Henry still wasn’t able to secure his second career world championship. That promo is currently his last great moment in his career, because he hasn’t done anything special since. With seemingly one year left until his contract expires, Henry is expected to retire at the end of 2016. For someone who has been around for so many years, it’s hard to believe that he’s only been a world champion one time.

It’s uncertain what direction WWE wants Henry to go for his most likely final year in professional wrestling, but hopefully they give him more airtime because he’s still able to be a destructive heel. Henry’s career may not be over yet, but his best moments are most likely behind him.