In another great ladder match, Sammy Guevara was injured. And, will Bret Hart be able to appear at the upcoming AEW PPV?

In the main event of Dynamite this week, Sammy Guevara was injured after a nasty landing off the top of the ladder. Also, Bret Hart might actually be able to appear for AEW.

A common occurrence on AEW Dynamite almost each week is seeing the TNT Championship defended. It has produced a ton of great matches, that have also seen gimmicks attached.

This week, Sammy Guevara lost the title back to Scorpio Sky in a ladder match. That match was full of big spots and therefore dangerous bumps.

At one point, Sammy went to almost the top of the ladder for the 630 splash. Sky moved and Guevara landed bad on his neck and left shoulder.

I DID NOT EXPECT THAT

THAT MATCH WAS ABSOLUTELY INCREDIBLE OH MY GOD @ScorpioSky @sammyguevara HATS OFF TO YA!!! #AEWDynamite @AEW pic.twitter.com/Kt3xkZeZU9

In the Wrestling Observer Newsletter, Dave Meltzer noted how Guevara was indeed injured in the spot. He is feeling better, but we will have to see if he misses any in-ring time.

The entire program between Guevara and Sky has changed within a few weeks. Earlier in the month, Guevara was the face and Sky a heel.

Tay Conti’s relationship with Guevara caused fans to turn on both of them. As a result, they cheered Sky.

So, is that considered a double turn between Sammy Guevara & Scorpio Sky last night on #AEWDynamite in the Ladder Match?

Now, it seems like Sky will be changing who he hangs with as well. Lately, he had been with American Top Team owner Dan Lambert and Ethan Page.

Look for Sky to possibly feud with Page going forward. As for Guevara and Conti, they have Paige VanZant to deal with. 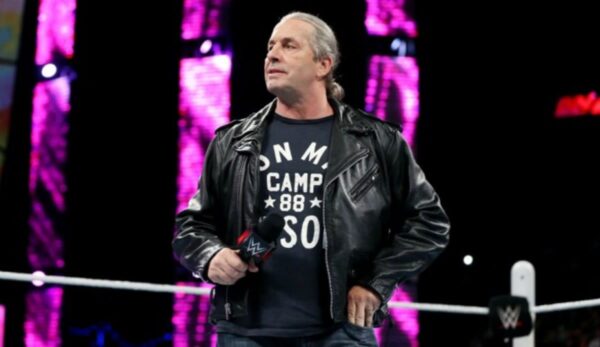 When AEW was crowning their first World Champion, Bret Hart made a special appearance. The WWE Hall of Famer was there to showcase the belt before Chris Jericho won it.

Since that moment about three years ago, Bret has not returned to AEW TV. Some are under the impression Vince McMahon was not pleased that Hart appeared.

Since Hart was not under a WWE contract, there was nothing to stop it from happening. So, that brings us the Owen Hart Tournament being put on by AEW.

Based on what Dave Meltzer was told, Bret could appear at the finals of the tournament to congratulate the winner. That is because Bret’s deal with WWE only revolves around merchandising.

“Bret Hart said that his only deal with WWE is a merchandising deal and not any other deal,” said Meltzer. “AEW was under the impression he could not appear for them due to his deal with WWE.”

“We don’t have it clear whether Hart could legally appear on an AEW broadcast or not. Past AEW believed he was not legally available to them.”

“It would make sense for him to be in Las Vegas for the Owen Hart tournament finals, but as we noted, as of last week it didn’t appear that was going to be the case. Dr. Martha Hart obviously can and will be at that show.”

Martha Hart will be there, so at least someone from the family can present the trophy. I think having Bret also there would be great as this not about ratings.

The tournament is to honor a great wrestler taken way too soon in a horrific accident.

Five Megastar Celebrities Who Were In The Military