The New Day was defensive after their tag title win on RAW. Plus, Bobby Lashley was promised a BIG match in the WWE that was never delivered.

Thanks to a win over the Hurt Business on RAW, the New Day are now 11-time WWE Tag Team Champions. Most fans were happy, some were not, which placed them on the defensive around their most recent title win.

The good news is that the New Day captured their 11th WWE tag title win on Monday Night RAW. The bad news? Well, they faced some backlash from some fans. As such, Kofi Kingston and Xavier Woods responded to their critics.

During a backstage interview, Woods and Kingston had some strong words over those within the WWE Universe who may be “tired” of seeing the New Day hold tag team gold.

The New Day stated that fans should turn their anger over to the competition that failed to “step up”.

Kingston happily noted during the interview that they told a lot of people what would happen. He stated that “a lot of people” might be upset and “tired” of seeing him and Woods as tag champs.

Kingston then relayed that fans shouldn’t be mad at them, rather they should be upset with Cedric and Shelton who weren’t able to hold on to their gold.

Kingston further added that fans should be “mad” at their favorite tag teams who fail to “step up” to the New Day.

Kofi concluded by saying that he and Woods were just doing their jobs, which is to entertain and win championships.

After they scored the win and the titles, AJ Styles and Omos came out. They challenged Woods and Kingston to a championship match at WM 37. Thus, the match has officially been placed on the card.

Speaking of the Grandest Stage of Them All, Bobby Lashley versus Drew McIntyre is also locked in the WrestleMania 37 books. However, this isn’t exactly the dream match Lashley may have had in mind.

It’s no secret, Bobby Lashley has wanted a WWE match with Brock Lesnar for a while now. Recently, Lashley directed a message to Brock’s advocate, Paul Heyman, during a TMZ Sports interview.

As well, “Lesnar” was trending on Twitter after Bobby scored the WWE Championship. 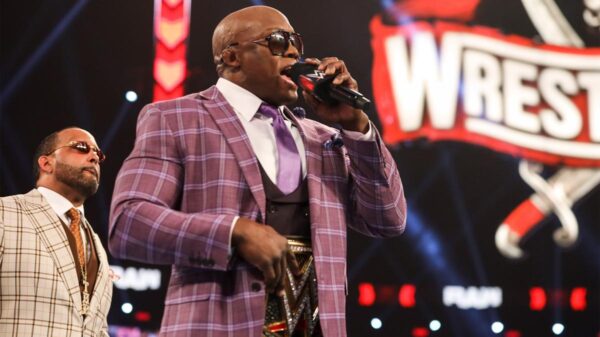 Dave Meltzer of Wrestling Observer Radio noted that Bobby Lashley was promised a Brock Lesnar match when he returned to the WWE in 2018.

Sadly, Lashley was placed in other programs and the company never got around to a Brock versus Bobby feud.

Will It Ever Come Be?

Lesnar versus Lashley obviously won’t happen at this year’s ‘Mania. However, will it ever come to be?

Unfortunately, Brock is now a free agent. He is no longer under contract with the WWE. He hasn’t had a deal with the company since the summer of 2020.

There has been zero word of any discussions between the WWE and Brock as of late.

Never say never in the land of sports entertainment. Yet, it looks like Brock Lesnar versus Bobby Lashley won’t be happening in the WWE anytime soon. Perhaps it is something that fans can look forward to at some point.