Asuka May Have A Concussion, NXT Title Match Nixed Over Injury

Could WWE RAW Women's Champion Asuka have a concussion? We offer an update! Plus, an NXT Title match was recently scrapped, due to an injury.

WWE RAW Women’s Champion Asuka could have a concussion. She was not on the show this week. A clip of Shayna Baszler kicking her in the face was shown, with her tooth flying out. Update on this, below.

Asuka May Have A Concussion

Asuka took a hard hit to the face during the February 26th edition of RAW. So much so, she lost a tooth in the process and hid her face for the remainder of the match.

The WWE stated she was not on RAW this week because of her tooth injury. However, could there be more to this story?

Dave Meltzer chimed in on this during his recent Wrestling Observer Radio. He noted that it is likely she got a concussion, too.

She took a bad hit to the face. Therefore, it would make sense that she not only suffered a lost tooth injury, but is concussed, as well.

As per Meltzer, another reason is that “nobody” (WWE) mentioned the concussion, which usually means the superstar could have one.

The Road to WrestleMania

Concussions can be an odd injury. Sometimes, a superstar can get concussed and return to action within weeks. Other times, these injuries can leave a wrestler out for months.

Getting an injury with WM 37 only weeks away is never a good thing. Charlotte Flair has relayed her interest in the RAW Women’s title. Flair would love nothing more than to face the Empress at WrestleMania.

"I want the #WWERAW Women's Championship. I want to face @WWEAsuka at @WrestleMania." – @MsCharlotteWWE pic.twitter.com/DKpZBKdlpF

With that said, Asuka is currently out of action. Only time will tell how this situation will unfold.

Speaking of injuries ruining things, an NXT title match recently got nixed due to someone getting hurt. Full details below.

The land of sports entertainment can be so unpredictable. While WWE officials can plan to their heart’s content, sometimes things roll down the pipe that is out of anyone’s control. 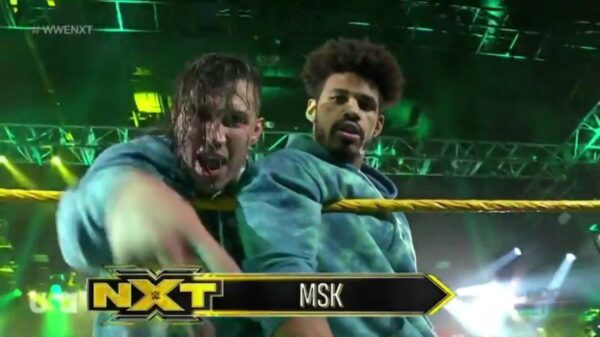 Injuries happen to be a major “uncontrollable” factor in professional wrestling. One minute a superstar can have a title shot riding on cloud nine. However, if they get injured, the match can be taken away just as quickly.

This is exactly what happened to MSK. The tag team was lined up for an NXT Tag Team titles match this coming week. Sadly, due to Wes Lee’s injury, it was nixed.

According to Dave Meltzer of Wrestling Observer Radio, Lee got injured during NXT TakeOver. His hand was broken during a dive in the match against the Grizzled Young Veterans.

Unfortunately, the WWE was planning on having an NXT Tag Team Championship match this Wednesday that would pit MSK versus Burch and Lorcan. This has now been scrapped.

The good news is that win MSK had at the Dusty Rhodes Tag Classic tourney will not be directly followed by a championship match. There should be other chances for this tag team down the road.

Here’s hoping that Lee’s broken hand won’t keep him out of in-ring action for too long. It doesn’t sound overly severe or complicated, so recovery should be swift.

Sadly, it is awful timing for this injury. Still, once Wes Lee recovers, MSK can hop back on the momentum that they’ve built recently and move forward.

Why Roman Reigns Won, Is Tom Phillips Gone From WWE