WWE's 2021 Royal Rumble has come and gone, and we get to sit back and rank the Superstar entrants, the hits and the misses this year!

WWE’s Royal Rumble 2021 was Sunday evening, and we once again got to enjoy the men’s and women’s events. Now, we can get into the fun stuff, ranking the Superstar entrants, the top hits and misses.

For both the men’s and women’s matches, we had plenty of entrants known ahead of time. However, as with pretty much every year, there were a chunk of slots not announced.

For the men’s match, we came in with less than 10 open slots. For the women’s match, the number was nearly half of the entrants.

So, of all those we knew, and those who surprised us…what were the hits and misses?

Right off the bat, there’s one thing I want to throw out. I don’t envy the booking of these matches, because while many fans want to see the younger Superstars get a shot…many of us love the nostalgia, too.

With only 30 spots, that is a challenging balancing act. What made things even harder in 2021’s Royal Rumble was the lack of a live audience.

It’s that reason that we knew ahead of time that Edge was in the Rumble. That’s likely also why Braun Strowman showed up on SmackDown.

In a normal year, one or both returns would have likely not happened until the Rumble itself. That they happened the week prior, those aren’t really misses.

More, it’s acknowledging that things are still very different. Hopefully the 2022 Rumble will be back to normal.

With that said, there were some misses-both in who was in the match, and who actually was not.

On the women’s side:

R-Truth, for one. Fine, Truth was not formally in the match, but I was not a fan of having him come down and have the title defended in and around the Rumble match.

Alicia Fox, for another. I was not a fan of how her last run wound down, and she was tied to the R-Truth sideshow…could have done without. 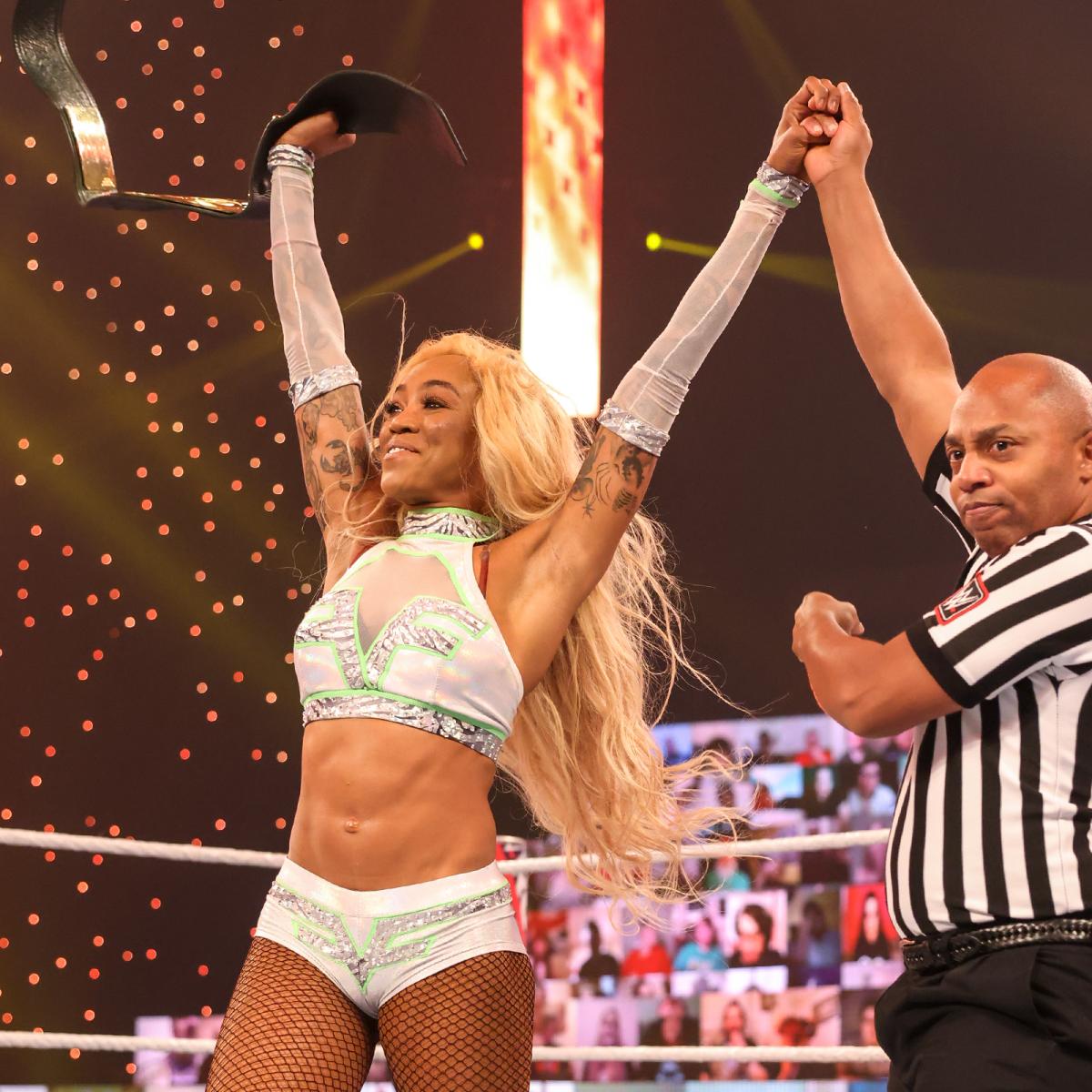 Jillian Hall and Victoria…I mean, I get the want for nostalgia acts, and with the pandemic there may have been tougher challenges to get talent on the show…but I’d rather have seen Trish Stratus or Beth Phoenix. 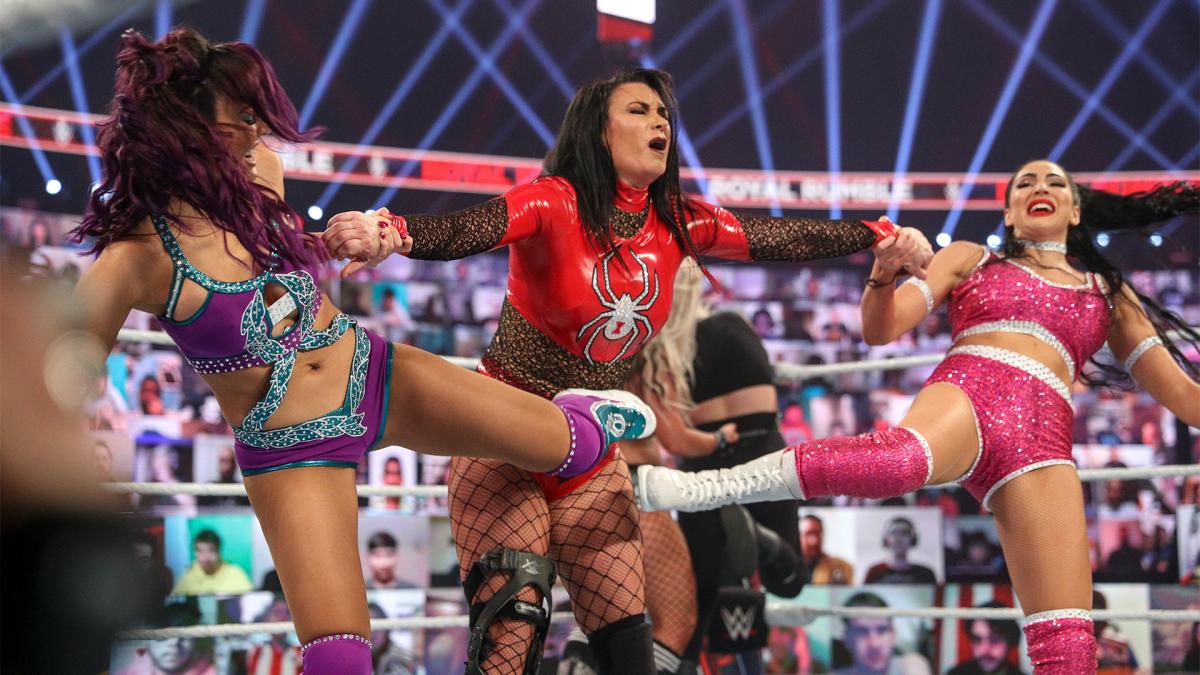 Speaking of other, perhaps better, choices? No Lita this year.

And speaking of pandemic issues, we knew we’d have no Mia Yim, due to her positive test.

Perhaps WWE was looking to spread things around to the female Superstars of the past? But, it did seem like a few of them had some issues with some spots not being so crisp, among other things. 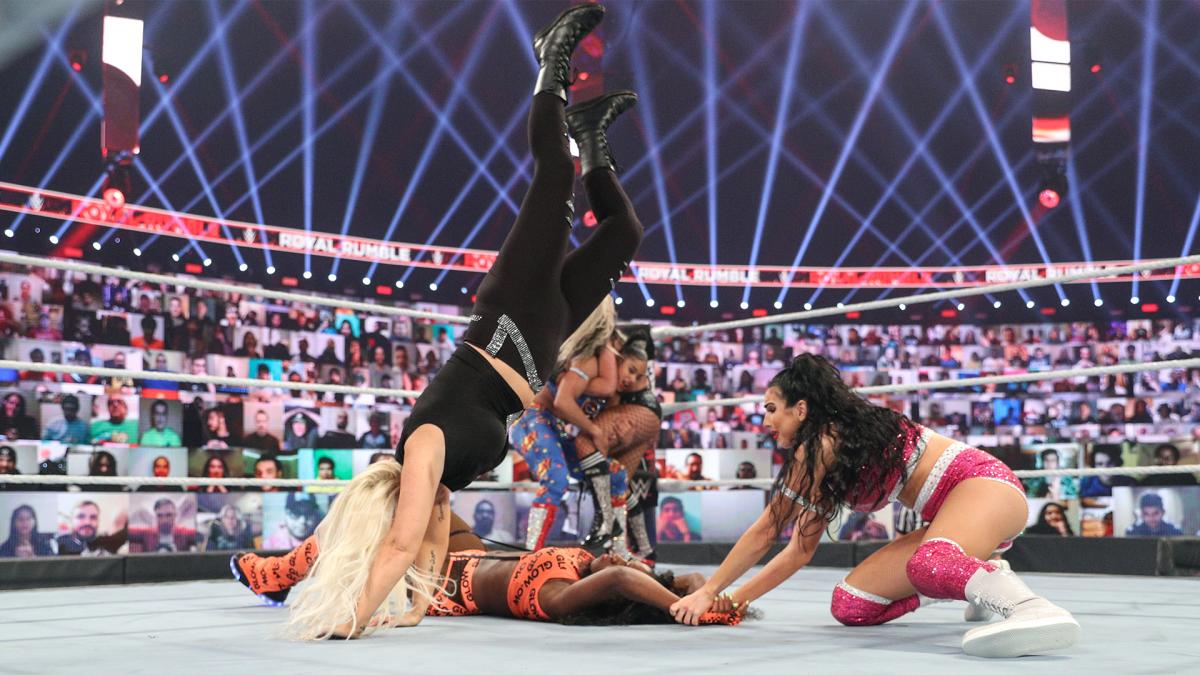 Also, considering the number of NXT talent involved, it was worth pointing out that we had no Candace LeRae, Raquel Gonzalez or Io Sharai, to name a few.

On the men’s side:

Right off the bat, I admit I have fewer gripes with the men’s list, and here’s one major reason why. We had fewer open slots heading into the show, which meant most of the participants were from the active roster.

My bigger missing gripes are actually of talent we could have seen but did not. As in, couldn’t someone like Shelton Benjamin have had a better match than the ever so brief appearance by Hurricane Helms? 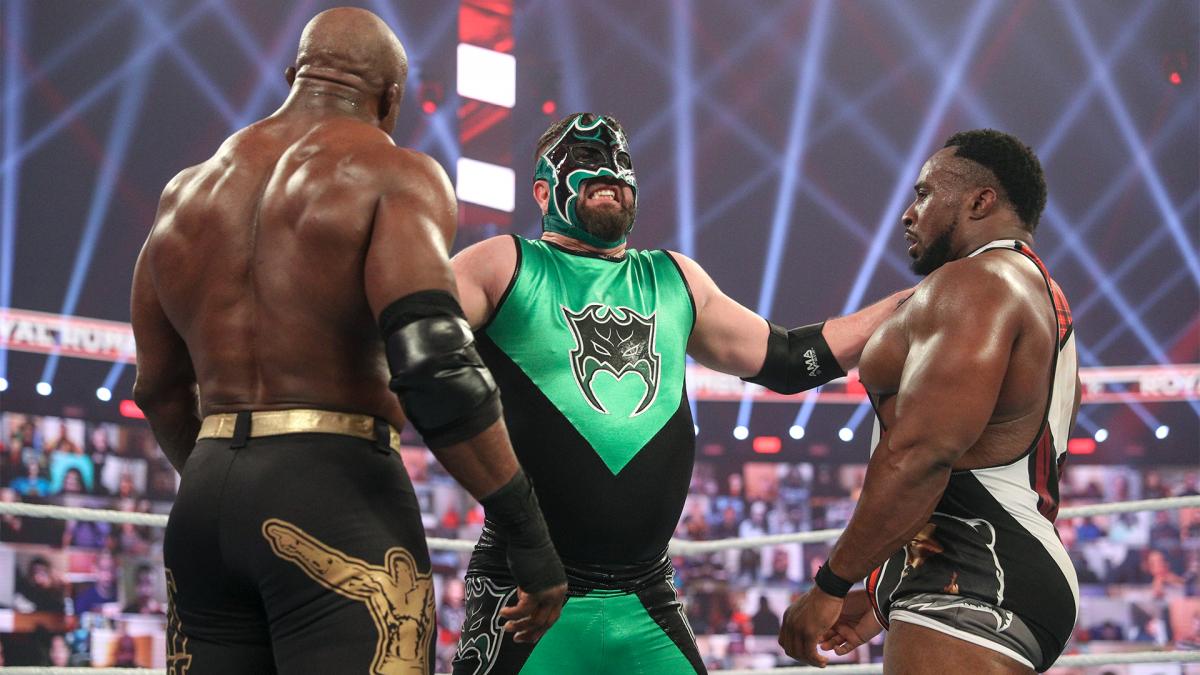 Helms was probably my biggest miss. The others I’d point out were those not in the match, like Benjamin, MVP or long shots like John Cena and Brock Lesnar.

Also, no Wyatt or Fiend, which I think was at least in part to allow Orton and Edge to function as a major storyline without any significant interference.

Another missing the match, one of last year’s big stars, Keith Lee.

In addition, there wasn’t much of an NXT presence. I mean, sure, Damian Priest did well, but that was about it.

No Undisputed Era. No other major names from NXT at all, really.

One other near miss, but worth pointing out? Bad Bunny’s bad leap off the top. 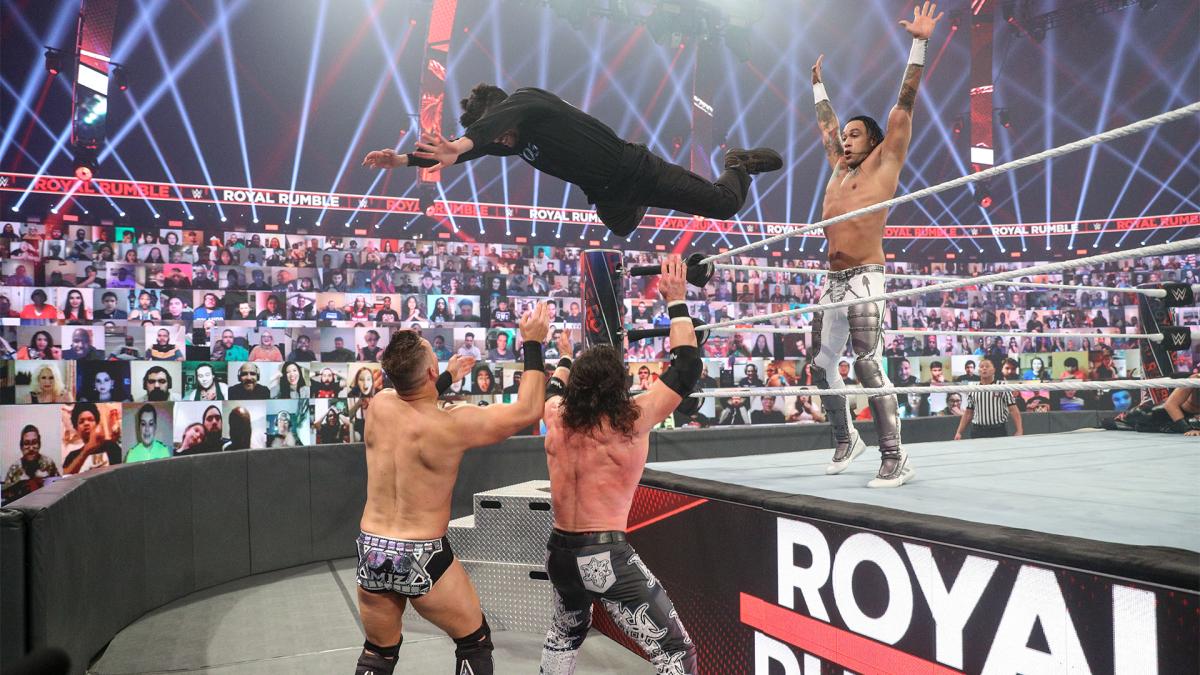 I can’t help but figure that was motivated by Snoop Dogg and his AEW spot. But as Bunny leapt, his foot slipped and the end result could have been really bad.

On the women’s side, since they had a lot of spots to fill, having a good number of NXT talent involved seemed likely. 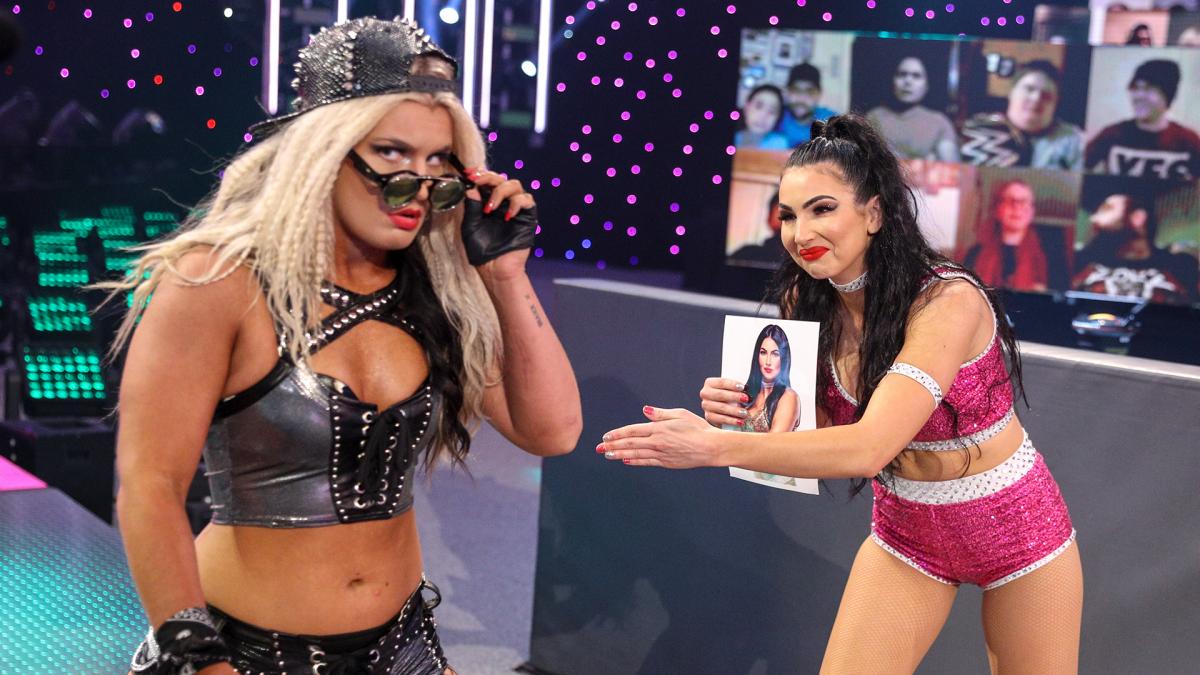 Some were more surprising than others, but I liked that a number of them were involved and worked well.

Hard not to enjoy Shotzi Blackheart and her tank. On one hand, I worry how that translates on the main roster…but she could be a new 3rd for the Riott Squad… 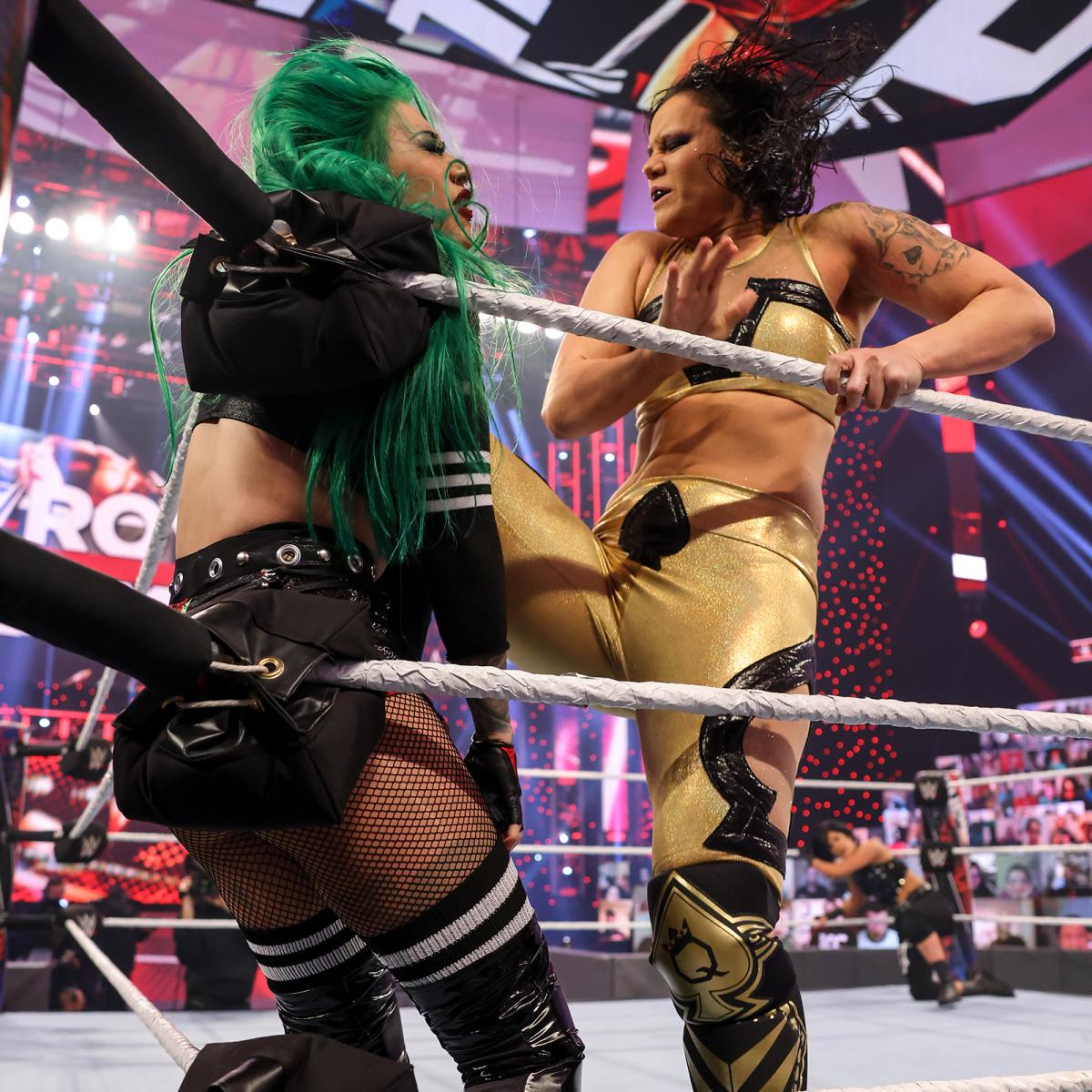 Rhea Ripley had a nice showing, lasting to the very end. That was likely her main roster debut, though we will know more soon enough. 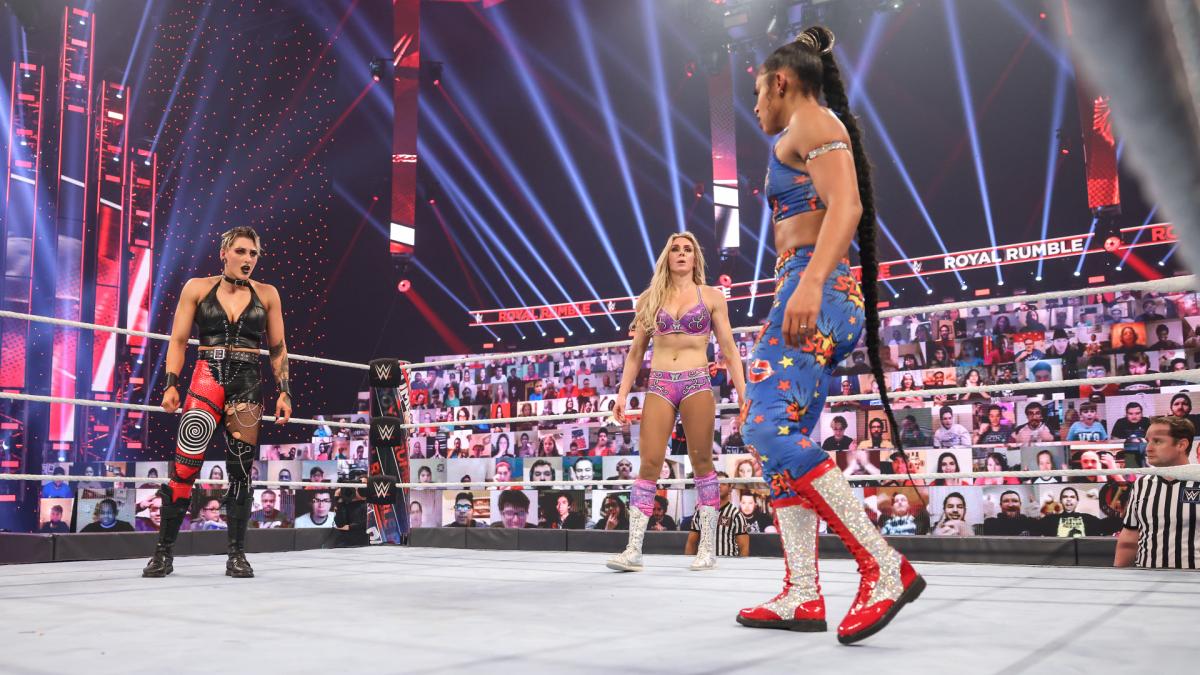 Best of all was Bianca Belair, however. When you saw two fresh faces left against Charlotte, the worry was that WWE was teasing us, but would play it safe.

They did not, and the EST of WWE has punched her ticket to WrestleMania.

On the men’s side…

Yes, I love nostalgia. So most of the surprises here worked out.

Carlito looked to be jacked, and lasted a bit. Could he be this year’s MVP? 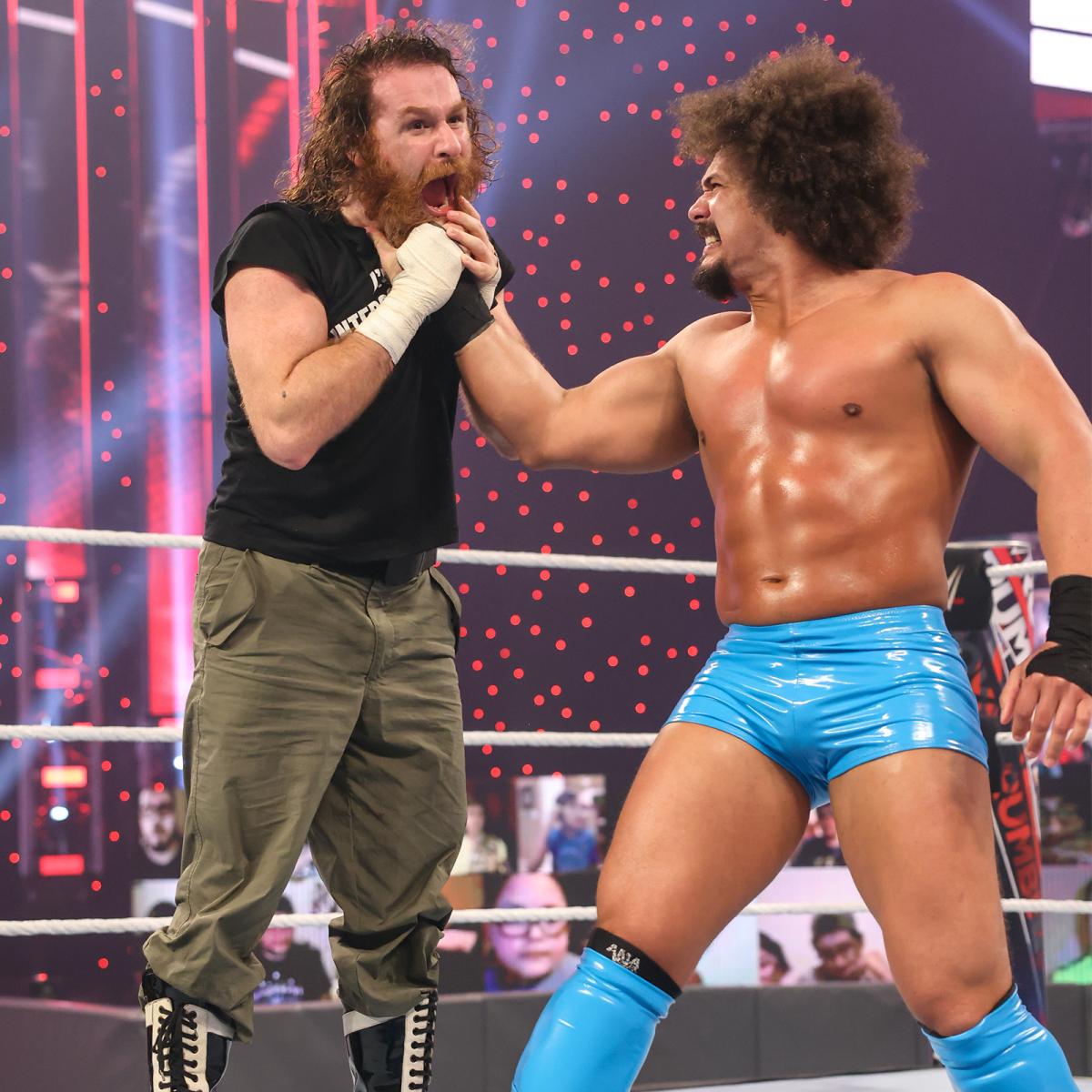 Christian was a nice surprise and had a good run too. 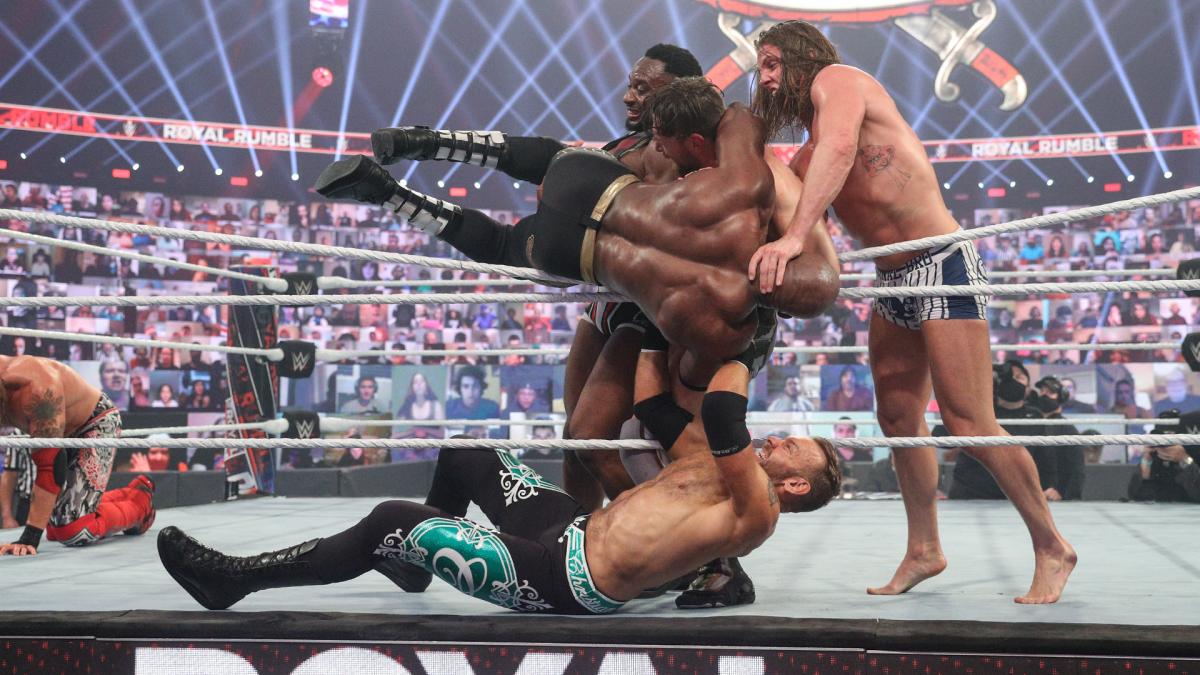 There were rumors at the tail end of 2020 indicating that he was expected to be on RAW or SmackDown soon. I can’t help but wonder if his excellent match was an indication that he’s been called up.

Seth Rollins also returned, though that wasn’t really a huge shock. He was “only” out due to becoming a new dad, so it wasn’t like it was a return from injury. 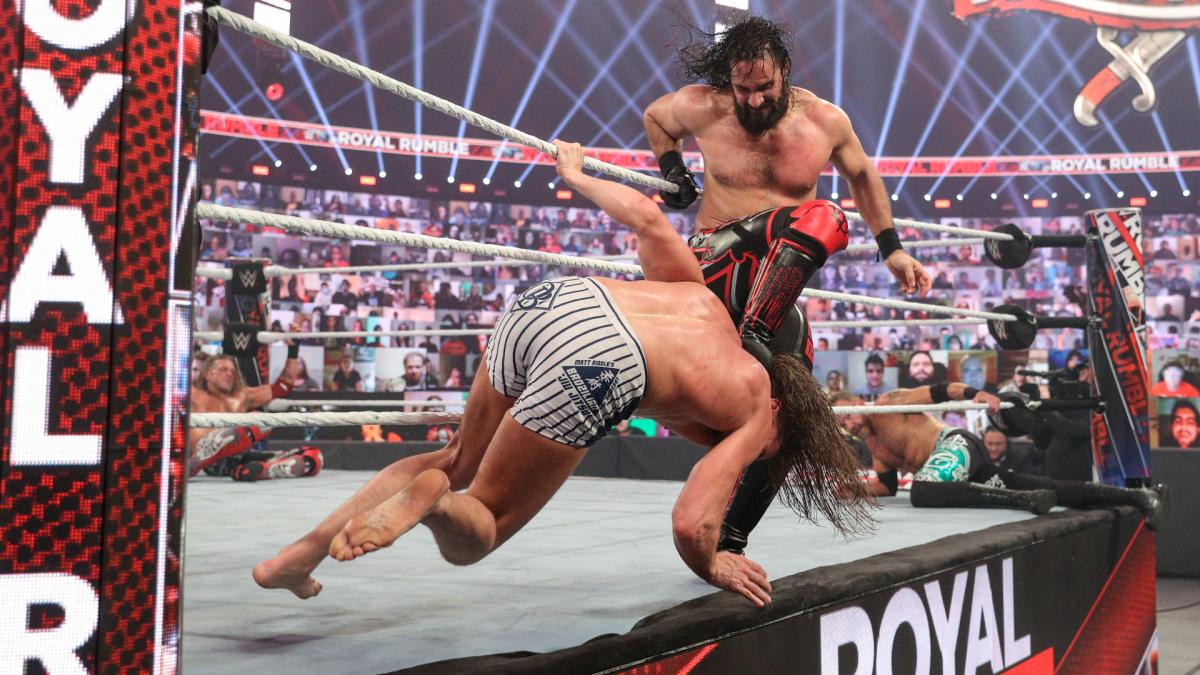 The one complaint about his return, however? With the time away, I had hoped that perhaps they’d ditch the messiah gimmick, or at least start to pivot in a new direction.

I’d say the men’s and women’s Rumble matches delivered more hits than misses, in terms of who was in and how things went.

Considering the show had no live fans, and was navigating an ongoing pandemic? Things probably went about as to be expected.

There was not going to be a major return in 2021, like we got with Edge last year. Some of those returns just have to be in front of a live audience, preferably a packed house.

It might take a while to get that back, but until we do, I think we can understand why the truly mega-stars are sitting this one out.

Both matches delivered. Loved seeing Bianca Belair win (and would have been happy with Rhea Ripley, too).

I enjoyed Edge winning it, though I know there are some who don’t like it. I get why, wanting the newer Superstars to have a chance (like Big E), or to give someone else their first Rumble win (Daniel Bryan). 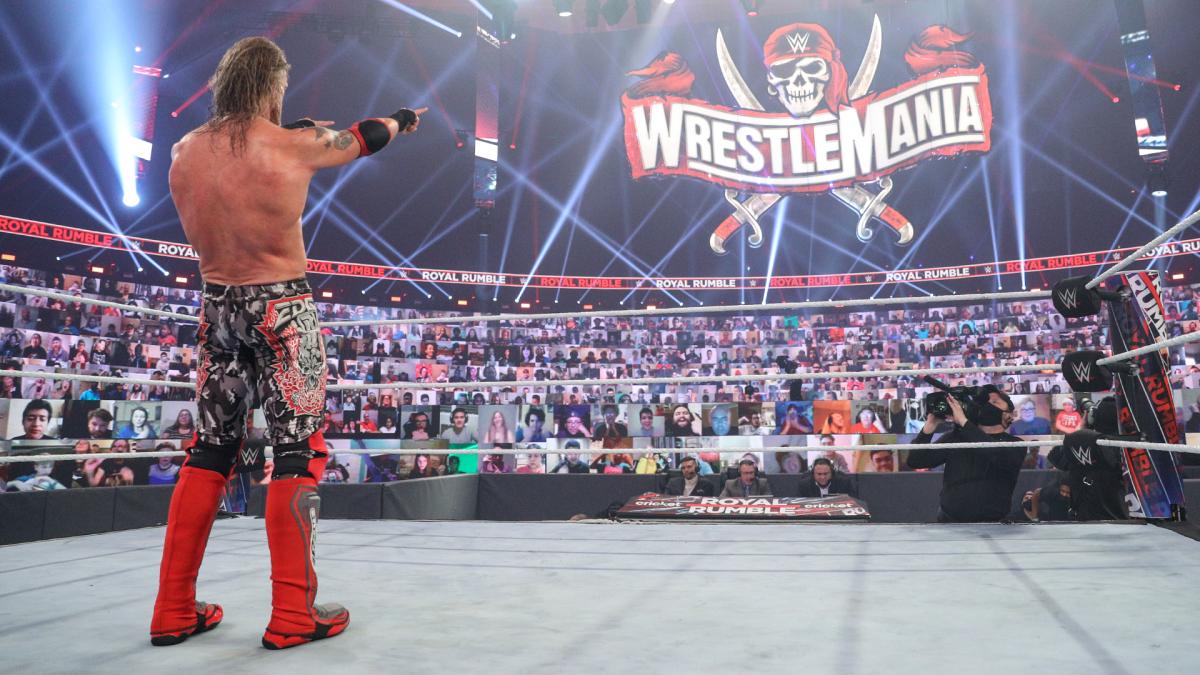 In the end, however, I think WWE booked two smart choices. I know we had heard talk of a controversial ending to the men’s match, but it seems that idea didn’t happen.

Considering how it did end, I have to wonder if it was either having Orton win, or having The Fiend show up and cost him.

How both matches ended? As a fan, I am good with both.

All in all, a satisfying set of WWE Royal Rumbles to start 2021.