John Tesh said "I was begging God for healing" after his prostate cancer diagnosis. He credits his wife and his faith for his health today.

In a new interview this week, composer and radio personality John Tesh spoke up about how his Christian faith got him through the tough times in life, including a battle with cancer.

Tesh hosted Entertainment Tonight with Mary Hart from 1986 through 1996. Here’s a look back at various moments from the show:

He’s had a fascinating career and has sold more than eight million albums, won six musical Emmys, and recorded four gold records. He also framed the action during Olympic gymnastics and sports ranging from Wimbledon to the Tour de France.

In 2015, John Tesh was given just 18 months to live after being diagnosed with a rare form of prostate cancer.

He said: “I got cancer the same exact year almost to the month my dad died of cancer. DNA is not programmed like that – I manifested that cancer in my body because I worried about it my whole life.”

Tesh gave details about his state of mind:

“I had complications with the surgery, bone biopsies and the chemo made me so sick,” Tesh said last year.

“At a certain point, I had a couple kettlebells I exercise with out by the pool. I was absolutely certain I was going to tie those to my ankles and jump in. Not only are you miserable, but you feel like you’re ruining everybody’s life with this thing.

He told Fox News that while receiving treatment, he would often read the Bible with his wife Connie Sellecca. 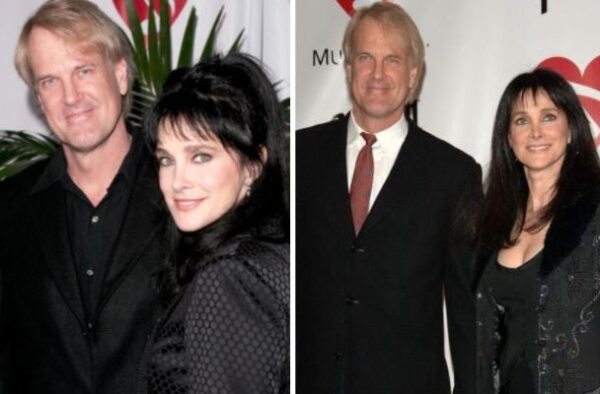 “At that time, I was trying really hard to believe that everything was going to be all right,” Tesh recounted. “I was begging God for healing. And when Connie and I read the scriptures together, we learned that God wants us to have health and wellness, healing and prosperity. And the Bible speaks truth. It’s the same yesterday, today and tomorrow.”

“I think people will really be surprised to read what the Bible has to say if they take a break from their phones and just read the scriptures each day,” Tesh added. “I really recommend the Book of Romans and just take a deep breath.”

When the cancer returned in 2017, he underwent a series of treatments again. In 2018, he had a blood test that showed his markers were clear.

Tesh went on to confess that like many people, he has fallen victim to “doom scrolling,” or mindlessly reading negative, heartbreaking news articles and social media all the time.

He noted that this self-destructive behavior can have a devastating impact one’s mental health during these unprecedented times.

“I think it’s incredibly important to stay informed and educated,” he said. “But I also think it’s just as important to take a step back and disconnect. You can’t constantly consume all the negativity all day, every day.”

“It may sound ridiculous coming from me because I fell for it myself, but I found myself being pulled in so many different directions,” Tesh continued. “We need to take care of ourselves and our hearts. And reading the Bible does that for me. It helps me understand my truth and it connects me with my family, especially during difficult times.”

Tesh Has Faced Other Challenges

Tesh discussed other challenges that he’s faced in life as well, including being homeless and recording a song that would send his children to college.

He released his memoir in February 2020 called “Relentless: Unleashing a Life of Purpose, Grit, and Faith.”

“I’m healed and I feel good,” said Tesh. “I take care of myself. But when you go through such suffering like that, you can never really forget it. And it has made me grateful each day that I can wake up every morning and be with my family. I thank God every day for my healing. I can’t just put aside that suffering I’ve experienced. It’s a part of me. And it’s taught me that when faced with an enemy, I’m strong enough to pick up that sword.”

Though staying positive is not an easy task these days, Tesh said that he will continue to lean on his Christian faith during the difficult times.

“Socialization is healing at any level, even if it’s through Zoom or a simple phone call,” said Tesh. “That’s one piece of advice I would give to anyone right now. Find a way to call someone who hasn’t heard from you in 10 years. Check in on your loved ones. I know when I socialize with my loved ones, I certainly feel good.”

God bless John Tesh for showing the world just how powerful his faith has been in his life!