As per a report, Nikki Bella's social media worth is estimated at over $126 million! Also, Eric Bischoff is "pro" steroid-use in wrestling.

Nikki Bella’s been spotlighted in a recent report stating her social media worth is at over $126,000,000! Meanwhile, Eric Bischoff recently stated that he believes pro wrestlers should be given the “okay” to use steroids.

During the latest Wrestling Observer Radio, Dave Meltzer featured a recent report that showcased female athletes and social media. It cited former WWE Divas’ Champion, Nikki Bella, as 2020’s “most valuable female athlete” on social media. While the name of the report was not mentioned, it noted Bella’s social media value stood at over $126 million last year.

The study also featured the most valuable partnerships, where WWE superstar Lana was featured. Her sponsorship with Fashion Nova was valued at over $1.2 million up to October 2020.

Matt Seabridge of LoveUX also compiled a list of high-earning celebrities on Instagram for 2020 in early January of this year. Lana ranked #83 within this report.

Sadly, both Rose and Lana had to exit their social media sponsorship deals due to a new edict in WWE’s third-party policy. Social media can be a fun way to connect with friends, community, and fans. For some, it can be a great way to make some money.

Time to step out of the world of social media and into the world of … steroids? Eric Bischoff recently stated he believes performance-enhancing drugs should be something pro-wrestlers should have access to. 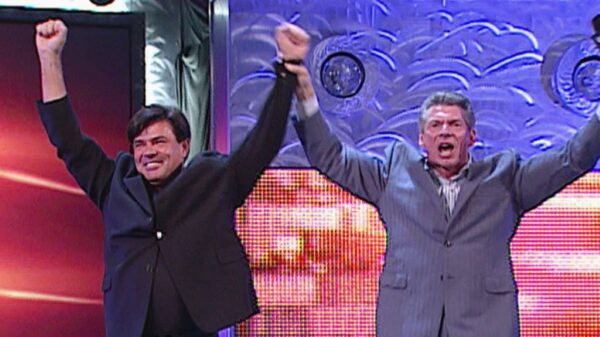 Performance-enhancing drugs are prohibited through WWE’s Wellness Policy. This includes steroids. A WWE superstar can be suspended for violating this policy. Tested randomly done on a regular basis.

Steroid use in professional sports has always been a controversial topic. Still, Eric Bischoff recently chimed in on the subject. According to him, wresters should get “a pass” when it comes to this drug.

He recently had an interview 83 Weeks, pointing out that Hollywood actors are known to use this drug to transform their bodies for different roles. How different is “sports entertainment” from TV shows and movies?

Now. Wherever you get your favorite podcasts. #83Weeks @83Weeks pic.twitter.com/GB8OZ8DyUF

What Exactly Did Bischoff Mean?

His statements may raise an eyebrow or two. But, he made it clear that steroids can be a “great thing” when prescribed by a doctor and monitored. More from the interview, below:

“Now, that is generally speaking. In the entertainment business, I’m sorry, but are you going to look around at some of the people we see in People Magazine.”

“And, ‘In six weeks, he’s transformed from this to this for a part in an action movie.’ I’m sorry, if you’re 35 or 40 years old and you have never worked out in your life, then you are not going to be able to make that transition in six months or eight months or even a year.

“You are not going to pack on thirty pounds of muscle in eighteen months as you’re getting ready for a movie without performance-enhancing drugs. I think in wrestling, in any form of sports entertainment if it is not amateur athletics or professional athletics, then people should be allowed to take whatever performance-enhancing drugs that are legitimate and prescribed by a doctor.”

It’s been a while since a WWE superstar has been suspended for using performance-enhancing drugs. Are they really needed in wrestling? The debate continues …