Booker T believes The Rock is a wrestling thief for stealing his moves and phrases. And, the latest on Jinder Mahal's WWE status.

If you listen to Booker T, then The Rock stole parts of his wrestling persona. Also, Jinder Mahal is looking closer to a WWE in-ring return.

Nowadays, especially in pro wrestling, it seems like all the moves are taken. A sleeper hold or DDT was enough to defeat an opponent, but those have become common moves for every wrestler.

Even finishers look the same. Case in point, The Rock Bottom and Book End are literally the same move. Now, Booker T is claiming the move as his own.

While speaking with Chris Van Vliet, Booker T claimed The Rock took some of his catchphrases

“I had [the Book End] first,” said Booker T. “I’m not gonna sit here and go back and forth whether it’s disputed or not.”

When asked to further explain what was stolen, Booker T replied how he did not want to go there. I guess, we will never know if or what catchphrases Booker T thinks were stolen.

I dunno about you but this was a weird time. pic.twitter.com/dI8Igt2ekj

The Rock is electrifying on the mic, so it is hard to think he would intentionally steal. Perhaps, it was a case of wrestling running out of moves and phrases.

In the past, The Rock and Booker T have battled. Their biggest match took place at SummerSlam during the invasion angle, with The Rock winning the WCW World Heavyweight Championship. 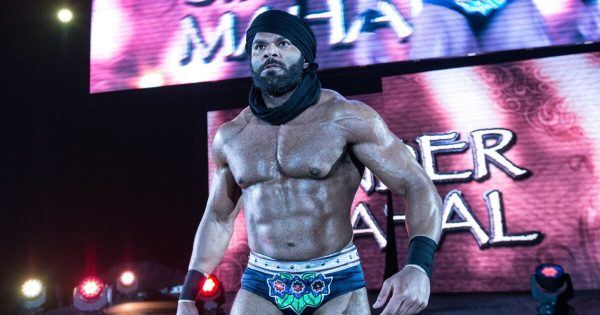 Back in 2017, Jinder Mahal was doing better than ever. He was rehired by WWE the past year and big plans were in motion.

People were shocked when Mahal qualified for a WWE Championship match. More surprisingly, he captured the title.

He went from jobber to fired superstar to WWE Champion within a few years. Then, some bad luck struck.

In June, Mahal went down with a knee injury. He was supposed to be out six to twelve months, returning around April.

At the time, he was going to be getting another push and this time as a face. Unfortunately, only months into the return and the former WWE Champion needed another knee operation.

This time, he noted how some things needed to be fixed and he would return stronger. The operation was minor, but there were complications.

The damage already done was more serious than first thought. Therefore, Mahal’s return has been delayed even further.

In an update, he went to Instagram this week to honor the late Brodie Lee. He did Lee’s catchphrase and commented how he is getting closer to returning.

A post shared by Raj Dhesi / The Maharaja (@jindermahal)

WWE could have some big things already planned for Mahal. There is a massive WWE India project coming up and there are rumors Mahal will play a major factor.