Due to an infection, Jimmy Rave’s arm was amputated and his wrestling career is over. Also, Braun Strowman looks to be off the TLC card.

Jimmy Rave is retired from the pro wrestling because of some unfortunate news. He revealed on Twitter that his left arm, above the elbow, had to be amputated.

Doctors made the decision as there was a bad infection in the arm. We are not sure when the surgery occurred or what led to the infection.

Rave is best known for his time in ROH and Impact Wrestling. The 37 year old made his wrestling debut in 1999 and got his big break in 2003.

At that time, Rave joined The Embassy in ROH. Also, he would win the 2006 Trios Tournament with Alex Shelley and Abyss.

He departed ROH in 2007 and joined Impact Wrestling. He was part of The Rock ‘n Rave Infection with Lance Archer, with Christy Hemme as their manager.

He would continue to wrestle around the Indy scene and also made a few more appearances for ROH.

Rave would blame most of his lackluster performances on a drug problem. He eventually checked into rehab to resolve his troubles.

This is a tough time for Rave and Wrestle Newz sends its support.

This is the hardest tweet I have ever had put out. pic.twitter.com/G9kr8oq7ra

“I have been very blessed for the last 21 years in professional wrestling and getting to live out my dream. Today, that dream has ended for me and I have a new reality. This past Tuesday my world came crashing down when Doctors found an infection in my left arm. I tried toughing it out but by the time I saw a doctor it was too late and they had to amputate my left arm above the elbow. Thus effectively ending my in ring career.

I appreciate everyone who has supported me or anyone who has pegged me with a roll of toilet paper. To my brothers & sisters I have shared the ring with or a locker room; thank you for always pushing me to be better. Thank You to all of my mentors and my students who allow me to still feel needed. This was the hardest thing I have ever had to type. If you have questions or comments please feel free to DM me. Please take your health much more seriously than I did. I am sorry for anyone I have let down. Support pro wrestling! -Jimmy Rave” 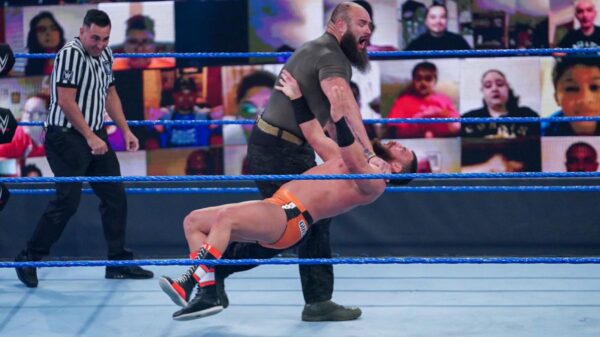 Heading into TLC, the plan was for Braun Strowman and Drew McIntyre to meet for the WWE Championship. But, somewhere during the Survivor Series elimination match, Strowman was hurt.

Now, it appears WWE will have to hold-off on that feud. During Wrestling Observer Radio, Dave Meltzer confirmed the knee injury at Survivor Series.

The triple threat is set for Monday with AJ Styles vs. Keith Lee vs. Riddle. All three sound like great choices for McIntyre.

In storyline, WWE suspended Strowman for attacking Adam Pearce. Once Strowman is cleared to wrestle again, he should be back on TV and possibly get the title shot.