Ronda Rousey has been dropping some hints that has led to speculation of an in-ring return. And WWE tried to hire Tony Schiavone before AEW.

Ronda Rousey has been dropping hints about her future and that includes an in-ring return for WWE. Also, WWE tried to hire Tony Schiavone and keep him away from AEW.

It has been a longtime since fans have saw Ronda Rousey inside a WWE ring. Based off some recent images, there is speculation that Rousey could be training for a WWE return.

One picture featured Rousey with Ariel Toombs, who is the daughter of the late “Rowdy” Roddy Piper. One of Rousey’s inspirations and all-time favorites was Piper.

Then, Rousey also sent out a photo from a match she had with Natalya. She noted how she could not wait to face the Hart family member once again.

In the Wrestling Observer Newsletter, they noted how Rousey could be dropping some major hints about her future. Their point was Rousey getting fans talking again while also training could mean she is preparing for a physical role.

Hollywood is an option, but many companies are delaying upcoming movies due to COVID-19. As for MMA, Rousey has publicly stated that she is done with that chapter of her life.

In a short time, Rousey quickly transitioned into pro wrestling with ease. She spent a little over a year with WWE, with her final appearance coming at WrestleMania 35.

At WrestleMania 35, Rousey made history alongside Charlotte Flair and Becky Lynch. The three became the first females to close a WrestleMania.

On that evening, about 18 months ago, Lynch pinned Rousey. The win was controversial as Rousey did get her shoulders up before the referee hit three.

In the process, Rousey lost the RAW Women’s Championship and suffered her first pinfall loss. Since that show, Rousey has not returned to WWE TV and openly mentioned wanting to start a family.

Perhaps, a big issue is the current state of WWE events. With WWE not having live fans, they went from using the Performance Center to now the ThunderDome.

WWE still has about six weeks left on their current ThunderDome deal. They have been searching for venues that will allow them to bring in at least some fans.

One idea being tossed around is using an outdoor stadium. All Elite Wrestling has gone that direction the past few weeks as they started welcoming fans back.

The earliest stadiums could see a large number of fans returns is not until the middle or later part of 2021. Even then, there is no guarantee as the world scrambles to counter COVID-19.

With Rousey’s price tag and value, WWE could wait until fans return. WWE has some possible locations for January’s Royal Rumble, which would be a great place to have a major surprise like Rousey’s return. 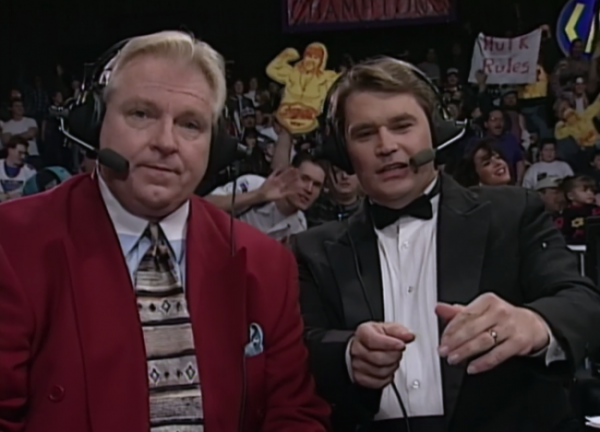 All Elite Wrestling has a three person announce team, with Jim Ross and Tony Schiavone being the veterans. Apparently, WWE wanted to sign Schiavone before AEW got the chance.

During a recent episode of What Happened When, Schiavone discussed a conversation with WWE’s Bruce Prichard. During their talk, Prichard hinted at Schiavone signing with WWE.

For Schiavone, the vague details gave him the feeling WWE only wanted him before AEW made an offer.

“They were very sketchy about it,” said Schiavone. “They said we just want you to come to work here. We need more people here who have a strong wrestling background to help out.”

“Well, what would I do? Well, you would just work with us. I was talking to Bruce (Prichard) and I think Bruce was shooting with me that he didn’t know. Now it’s pretty apparent what was going on and I don’t blame Bruce for it.”

“But, they wanted to get me so AEW wouldn’t get me and they would have run me out the door right after Eric Bischoff or before.  I’m not blaming Bruce but I get it. I know what Vince (McMahon) was thinking.”

If WWE did sign Schiavone, they would probably have him work on the WWE Network. It did not seem like they had interest in making the former WCW announcer a regular on TV.

In the end, Schiavone went with AEW. Besides calling the action, fans have seen Schiavone in some memorable segments with Britt Baker.