A man driving a Ford F-250 refused to allow Black Lives Matters protestors prevent him from getting gas despite their attacks.

These days the news is so hard to believe that it can feel like satire. A video of Black Lives Matter protestors screaming ‘Racist’! and ‘F–K YOU!’ while trying to block a man in an F-250 truck from getting gas is a prime example of this.

Many left wing agitators are labeling anything they disagree with as racist. Apparently, taking your Ford F-250 to get gas falls into the racism category these days.

A man attempting to pull into a Circle K Shell station in Lafayette, Louisiana was greeted with a line of protesters.

The Black Lives Matter protestors formed a human chain in an attempt to prevent the F-250 from making it to the pump.

But, the elderly driver was not having it. He was patient but persistent as he gently pushed through the line of people with his big truck.

That didn’t sit well with these protestors, who are probably better described as rioters. They hit the man’s truck and jumped on the back in an attempt to damage it.

The group actually tried to physically push back this massive truck as they chanted “No Justice. No Peace”. They might have youth on their side, but they were no match for this heavy duty pickup.

Clearly this group of rioters proved aren’t the sharpest knives in this drawer.

Note how one of the men really digs in to try to push the F-250 back from the gas pump. He’s trying so hard that he looks as he’s about to go down into a split.

Maybe he developed a hernia to go along with is bruised ego from such feats of strength. 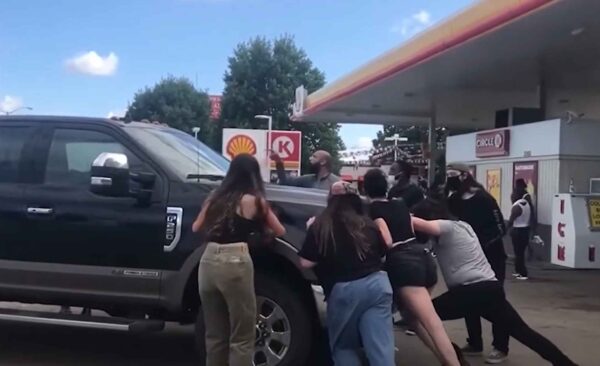 But the driver didn’t give up. Despite their screams of “Racist!” and “F–K YOU! F–K YOU!”, the man reached the gas pump then exited his truck to start pumping.

Now that takes guts! This man wasn’t going to run away and let these radicals paint him as a racist. What’s racist about filling up your gas tank?

But when he gets out of his car, these Black Lives Matter schoolyard style bullies showed what they are made of.

Most of the protestors ran away. They only wanted to confront the man when the truck acted as a buffer.

There were, however, a few “tough guy” Black Lives Matter protestors who hung around to call the driver a domestic terrorist for refusing to bend to their will.

Local news station KATC was on the scene and reported the driver was able to leave after pumping his gas and police arrived.

Get your popcorn and check out the video below for a good laugh and to cheer on this F-250 driver!

Now that’s how you do it!

There is nothing racist about getting gasoline. Bending to this nonsense will only encourage the behavior.

This man and his Ford F-250 accomplished his mission. These folks have no right to interfere with a private business in this manner.