After taking a brief hiatus for other work, the latest on Cody Rhodes' return timeframe. And, a familiar AEW name was spotted on WWE TV.

Despite being away, there is a timeframe for the return of Cody Rhodes. Also, a former AEW wrestler was spotted on WWE TV.

When All Elite Wrestling (AEW) introduced the TNT Championship, the inaugural holder was Cody Rhodes. Each week, Cody would defend the title in an open challenge.

Several current AEW wrestlers took part in the challenge, with some surprise appearances also being booked. After months of defending the belt on a weekly basis, Cody was defeated by Mr. Brodie Lee.

By the time the match took place on August 22, Cody was already hurt after numerous battles. In a one sided contest, Lee captured the title.

I've made a few small edits to this match, but Brodie Lee basically squashed Cody Rhodes for the TNT Title and here's everything that happened. #AEWDynamite pic.twitter.com/D7u8kTbtET

Afterwards, The Dark Order continued the beating. This was all done to write Cody off TV as he was a judge on the new TBS reality show “The Go-Big-Show.”

Now, PWInsider noted that Cody is expected to return to AEW in about three weeks. There is no word on his feud, but he may likely continue the storyline with Lee and his faction, The Dark Order.

It has been about a year since AEW Dynamite debuted, with Cody being one of the most active competitors on the roster. In fact, he worked the first ever match when he defeated Sammy Guevara.

It has been a wild two years for Cody. After he left WWE and rebuilt his name around the world, he became one of the lead people to help start AEW.

Besides being a wrestler, Cody has plenty of backstage responsibilities as a top person behind the scenes.

If you miss Cody and cannot wait a few weeks, be sure to watch “The Go-Big-Show.” Other big names on the show include actress Rosario Dawson and rapper Snoop Dogg. 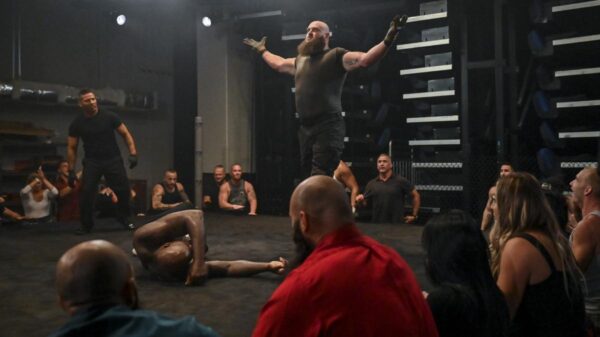 AEW has a mix of some familiar names and those that only a few have heard from the Indy scene. At one point, that included Suge D, who went by the name Pineapple Pete in AEW.

Pete was basically an unknown before he worked a brief match with Chris Jericho. Like many others, Jericho was able to elevate Pete as more than simple enhancement talent.

Then, last month, Pete noted how he was no longer part of the AEW roster. But, he stated there were ill no feelings about his departure.

Now, Pete has been spotted on WWE programming. During RAW Underground, he was seen inside the packed crowd.

Currently, according to the Wrestling Observer Newsletter, he is working for WWE as an extra and has not signed any sort of deal. Therefore, he could always end up back in AEW if WWE does not need his services anymore.

While spotted on RAW Underground, he is yet to get physical. Since the direction of RAW Underground has never been clear, many of the unknown faces usually end up taking a beating to put over other superstars with some name recognition.

WWE is likely not looking to sign new talent, but working as an extra might open future opportunities.