Brock Lesnar is a free agent, but Chris Jericho doesn't buy the story. And, an annual NXT Takeover card for 2020 has been removed by WWE.

If you ask Chris Jericho, Brock Lesnar isn’t a free agent. And, WWE has decided to pull an upcoming NXT Takeover card.

As noted, Brock Lesnar is no longer under contract with WWE. Of course, this has caused speculation to run rampant about where he might land.

If he does not re-sign with WWE, All Elite Wrestling (AEW) and the UFC are the only real contenders. The backstage belief is Lesnar will stuck around WWE as Vince McMahon would pay anything to keep him from leaving.

While everyone is wondering what is next for Lesnar, AEW star Chris Jericho is not concerned. In fact, he think Lesnar is not a free agent and the entire story is a work.

“The only reason why the rumor’s there is somebody said ‘free agent,'” said Jericho to Sportskeeda. “I don’t think he’s really a free agent at all.”

“I think it would take so much money to pry him away from Vince McMahon on Brock’s end and then for Vince to approve that…Vince has two billion dollars in the bank. What are you going to spend on Brock Lesnar that Vince isn’t going to match? And Vince and Brock have a strange love affair, to begin with.”

Jericho does make an interesting point. In the past, McMahon and Lesnar have worked their staff regarding “The Beast.”

Could Lesnar Join AEW Or UFC?

At the same time, Jericho is always trying to one-up rumors using the internet. Despite Tony Khan mentioning that AEW has not discussed anything involving Lesnar, that could be a work.

With All Out taking place tomorrow, Lesnar appearing would set the wrestling world on fire. Lesnar signing with AEW would increase interest in the current wrestling war.

As for UFC, Lesnar returning might be a long-shot. At 43 years old, Lesnar would have to reenter the USADA testing pool for six months and must still pay a $250,000 fine for a failed drug test dating back to UFC 200.

UFC President Dana White has not spoken to Lesnar, but is open to the idea of booking a fight. A match with Jon Jones at heavyweight has been something fans are asking for.

Lesnar has always been a wildcard and his current status keeps that opinion alive. 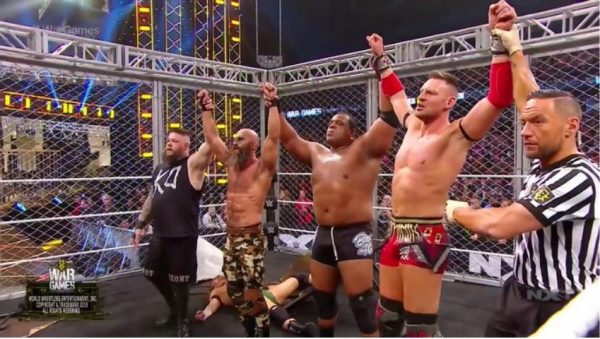 In the past, NXT Takeover cards usually take place the day before a WWE pay per view. But, WWE has been known to run Takeover without any other shows scheduled.

Typically, a Takeover special airs the day before Survivor Series in November. Although, PWInsider noted how WWE pulled the event and switched it to December 6.

WWE brought back WarGames a few years ago and it has become a staple for NXT in November. There is no word if the WarGames concept has been dropped.

NXT TakeOver ends with this MASSIVE move off the top of the cage by Tomasso Ciampa on Adam Cole!#NXTTakeOver #WarGames
pic.twitter.com/pW6uuLpNvL

By moving the Takeover card to December, it does allow for NXT to be better featured at Survivor Series. Last year, they battled RAW and SmackDown for the first time, with NXT leaving the superior brand.