UFC President Dana White has been managing to produce shows despite COVID-19 and he's ready to help The Rock get the XFL going.

The Rock purchased the XFL and his friend, UFC President Dana White, thinks the league needs to be up and running ASAP. Therefore, White is sharing some information with the Hollywood and wrestling star about moving forward with his $15 million purchase.

Right before the XFL was set to hit the auction block, The Rock swooped in. Along with his ex-wife and some business partners, the company was purchased for $15 million.

There had been no talk of The Rock making the major purchase, so many were surprised. Even major media outlets around the country picked-up the story.

As of now, there are no details on what the future holds for the promotion. If it was up to UFC President Dana White, fans would be seeing action very soon.

“If I was The Rock, I would try to get that rolling as fast as I could,” said White to TMZ. “I’d try to get that on television ASAP. I guarantee you there’s a ton of networks that would do it.

White is in a unique position considering how sports are struggling due to COVID-19. While many organizations are having trouble restarting, the UFC was one of the first to produce new content.

With TV networks looking for content, the XFL could quickly land a TV deal.

“Don’t be surprised if The Rock slides right into that slot with some great programming,” said White. “Cause let me tell you what, people are dying to watch live sports right now.”

Sports are starting to return, but with limitations such as no fans and extra precautions to battle the pandemic. But, several sports have seen players opt not to compete and athletes have been testing positive for the virus.

How The NFL Could Play A Role 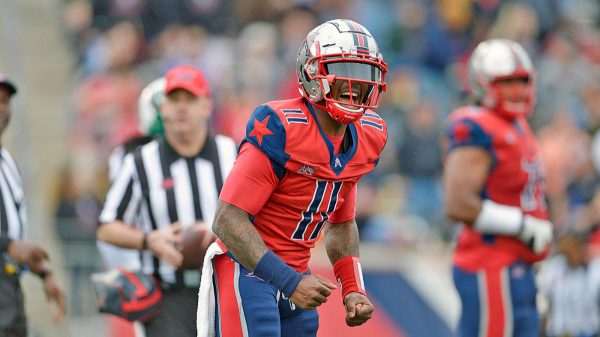 As for the NFL, they canceled their preseason and plan to run a regular season next month. Due to a lack of rules, some players have openly admitted they might not return.

The Rock and White are friend, which can be beneficial to the XFL. During his talk with TMZ, White said he planned to speak with The Rock that same day.

“I’m actually gonna call him today and walk him through what I think he needs to do on the COVID side of this thing,” said White. “And, I have some ideas for him.”

The relaunch of the XFL was cut short due to COVID-19. Only half a season was played before the league suspend operations before folding.

A hurdle for the XFL will be the return of the NFL. If the NFL returns as planned in a month, then they would likely crush the XFL in a ratings war.

While the XFL 2.0 created buzz and drew some big numbers in the beginning, they took a sharp dive towards the end. Still, with some direction, the XFL has the potential to return with even more noise.

In conclusion, The Rock’s shocking purchase could be a wise investment. For Vince McMahon, he struck-out twice in that adventure.