Former champion Samoa Joe has found his calling on the RAW announce team, but he will inside the ring? And will Pat McAfee return to WWE?

Samoa Joe has shown his abilities outside the WWE ring as an announcer on RAW.

However, that does not mean his wrestling career is complete inside the squared circle.

“When he first started doing the announcing, I was told that he was too valuable as a talent to have him as an announcer,” Dave Meltzer said on Wrestling Observer Radio (thank to Ringside News for the quotes). “But obviously minds changed from when I was told that to when they decided to revamp it.”

"Or I can slap you in the lips." – @SamoaJoe to @WWERollins

Samoa Joe did announce work earlier in his career for the WWE before returning to the ring. A concussion knocked him to the sidelines once more before joining the RAW team during shows at the WWE Performance Center.

The former two-time WWE NXT and two-time WWE United States champion suffered his concussion in rapid fashion. There has been no mention if the 41-year-old is cleared to return to action yet or not.

Samoa Joe is joined by Tom Phillips and Byron Saxton on RAW. The trio started on April 27 of this year. Phillips and Saxton previously began with the show in January alongside Jerry Lawler before Lawler departed. 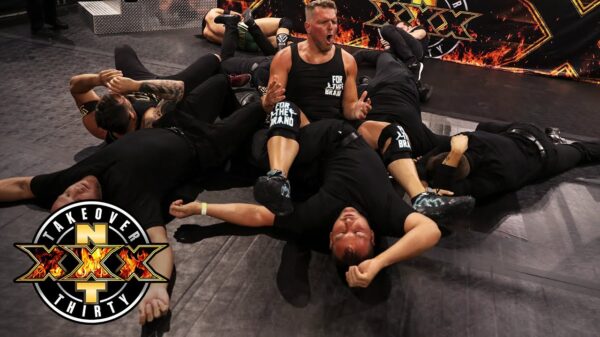 While McAfee did not come out on top, he impressed many around the wrestling community with his in-ring skills.

I woke up a bit sore.. I couldn’t fully understand why then I hopped on the Twitter

McAfee, though, does not plan to try and duplicate his success.

“We’ll cross that bridge whenever we get to it. And I’ve heard the conversation start all around me and there was a lot. Even my mom was asking, ‘Well, are you going to do this again?’ I’m like, ‘Well, let’s worry about that on Sunday.'”

Days after his #WWENXT debut, @espn checked in with @PatMcAfeeShow to get his thoughts on his impressive match against @AdamColePro at #NXTTakeOver XXX.https://t.co/gjxiaTNDel

For McAfee, Sunday arrived and told him the story.

“And then I got to Sunday, obviously, and I woke up,” he said. “Neck was sore, back was sore, foot was sore. I got flipped on my head. To be completely honesty, I’m not 100 percent sure what’s going to happen.

“I’m not under contract to do anything else with Mr. H. I assume he and I will talk about this at some point because I heard his comments in the press conference afterwards, which were very nice.”

The 33-year-old was named to a pair of Pro Bowls and also earned first team All-Pro status in 2014 with the Indianapolis Colts, who he spent his entire career with.