The police are investigating Marty Jannetty's claim on social media about murdering someone. And, an NXT wrestler is getting major praise.

Marty Jannetty, who made a name for himself as one-half of The Rockers alongside Shawn Michaels in the WWE, has come under the watch of local police.

Jannetty made several remarks on social media this past week, alleging to have murdered a homosexual man while he was a pre-teen.

In the post made on Facebook, Jannetty talked about the incident in great detail, stating that he was working at Victory Lanes, a bowling alley, when it happened. The man attempted to sexually assault Jannetty, and he retaliated in the most serious way possible.

Jannetty claimed to have placed the body in the Chattahoochee River. He has since taken the post down from the site.

According to TMZ, the Columbus, Georgia Police Department is now getting involved.

“We are going to look into this,” a spokesperson for the CPD homicide & cold case division said. “The first step will be seeing if we have any missing persons or unidentified remains cases that match the limited information in the post.”

Jannetty stated that his brother, Geno, had just returned from Vietnam while fighting in the war. The former WWE Intercontinental and tag team champion also wrote that he “just had a fall out” with his girlfriend, Winnie, in making the posts.

Stay tuned as we wait to hear if the police will pursue the matter and/or file charges against Jannetty.

@WONF4W @PWTorch #prowrestling did Marty Jannetty just talk about killing someone, on FB? Is this a "known story" in wrestling? #prowrestling #wwe pic.twitter.com/lVS57idhYS

The 60-year-old most recently competed for the Chikara promotion in 2013. He also was a two-time AWA tag team champion with Michaels and held the WWE tag titles with Sean Waltman. 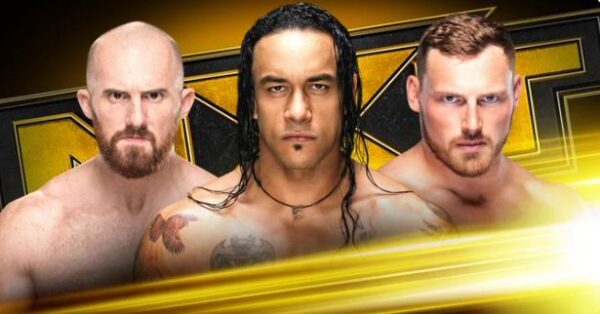 Luke Menzies, who goes by the name Ridge Holland, is earning high praise for his work within the WWE NXT UK brand.

Holland competed professionally as a rugby player for several years before embarking on his career in pro wrestling.

.@RidgeWWE took some #NorthernGrit overseas as he slugged it out for his chance to earn a spot in the #NorthAmericanTitle Ladder Match at #NXTTakeOver XXX!#WWEonBT | BT Sport App | #WWENXT pic.twitter.com/meeVdNDd65

The 32-year-old hails from Liversedge, West Yorkshire, England and standings 6-foot-1, weighing in at just over 250 pounds.

During his rugby career, he made one appearance in the Super League for the Hull Kingston Rovers. In 2018, he signed with the WWE following a 10-year rugby run.

The WWE noticed Holland during a tryout. He made several appearances on the independent scene in the United Kingdom.

In August of 2018, Holland made his first televised appearance for WWE NXT, facing Keith Lee. He made his NXT UK debut in 2019, earning a win over Oliver Carter.

Officials have since moved him back to the NXT brand, as he will take part in a triple threat match where the winner will compete in a ladder match to crown a new NXT North American champion. Joining Holland will be Oney Lorcan and Damian Priest.

“We have a North American title qualifying match with Damien Priest, Oney Lorcan and Ridge Holland,” Bryan Alvarez reported during Wrestling Observer Live (thanks to Ringside News for the quotes). “By the way, I’ve had a lot of people emailing me about Ridge Holland. They think that he has the potential to be the next big thing which is saying something.