Today’s NXT episode started with Kross and Scarlett heading to the ring. Kross already had his arm in a sling and told the crowd he warned them.

He confirmed that his shoulder was separated and spoke about the current situation. Knowing he could not defend the title, Kross left the belt in the ring.

Kross said this changes nothing and doomsday is still coming. The promo concluded with Scarlett placing the hourglass next to the belt and flipping it as the sand spilled over.

Right now, there is no word on how long Kross will be out. In the past, injuries like this have taken superstars out for months.

Both headed to the back as the announce team wondered what was next. By vacating the belt, Kross has the shortest NXT Championship title reign as it only lasted a few days. 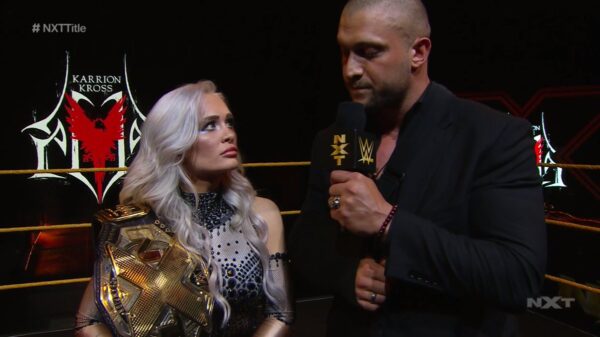 We do Keith Lee will not be vying for the title as he was sent to RAW after his title loss. WWE apparently has big plans for Lee, who meets Randy Orton at this Sunday’s Payback.

In the eight plus years of the yellow and black brand, this is the second time the title has been vacated. Tommaso Ciampa did the same due to a neck injury.

The timing is unfortunate, but WWE clearly has major plans for Kross. He could return to NXT and chase the title or easily be sent to main roster.

Karrion Kross and Finn Balor both vacated their Championships with the same injury #WWENXT pic.twitter.com/XCqFRvjurR

Karrion Kross has relinquished the NXT Championship due to injury just days after winning it.#WWENXT pic.twitter.com/KaOt5oH9lE

Due to a shoulder injury, Karrion Kross has to unfortunately relinquish his title. He says obstacles are his path. Tick tock! #wwenxt pic.twitter.com/AKnHyBUtmp

#WWENXT Stat of the Day:

Karrion Kross becomes the second NXT Champion to vacate the title. His title reign goes into the history books as three days, according to #WWE.com. This is shortest reign by any champion in history. pic.twitter.com/3amdDRL8eB

Oh no i knew that would happen. It’s upsetting wishing Karrion Kross a speedy recovery can’t wait till he reclaims the title. Man it sucks.