Hall of Famer and wrestling legend Mick Foley has high praise for one particular WWE star. And, AEW is changing their title plans.

Current WWE champion Drew McIntyre has arrived, at least according to a WWE legend.

Mick Foley, a former WWE champion himself, praised McIntyre for his work both inside the ring and on the mic during the coronavirus pandemic.

“(McIntyre) is doing an excellent job holding down the fort during unprecedented tough times,” Foley wrote on Twitter. “I hope he gets to address live crowds during his title reign, to get the #RoadWarriorPop he deserves.”

.@WWE Champion @DMcIntyreWWE is doing an excellent job holding down the fort during unprecedented tough times.

I hope he gets to address live crowds during his title reign, to get the #RoadWarriorPop he deserves. #RAW https://t.co/VPNRbNosXZ

Foley is far from the only person to take note of McIntyre, as Natalya replied “Agreed” to the tweet.

McIntyre is coming off a victory over Dolph Ziggler at The Horror Show at Extreme Rules where he successfully defended his title. Ziggler made the stipulation for the bout, declaring it an Extreme Rules only match for the challenger.

The two are set for a rematch on RAW this coming Monday night where the champion will reveal the stipulation this time right before the opening bell.

Nonetheless, McIntyre survived and is expected to enter a feud with Randy Orton towards SummerSlam.

The 35-year-old McIntyre has held the title since WrestleMania 36 when he defeated Brock Lesnar. A native of Scotland, he is also a former TNA world champion and Impact grand champion.

Despite the coronavirus causing issues for the promotion, McIntyre has had a banner 2020. He won the 2020 Royal Rumble before going on to defeat Lesnar and become the 31st Triple Crown champion in WWE history.

This marks his second run with the WWE after joining the promotion in 2007. He competed with the WWE until 2014 before being released.

In 2017, McIntyre returned and claimed the NXT title. He has also won the WWE Intercontinental belt and tag team titles with both Cody Rhodes and Ziggler. 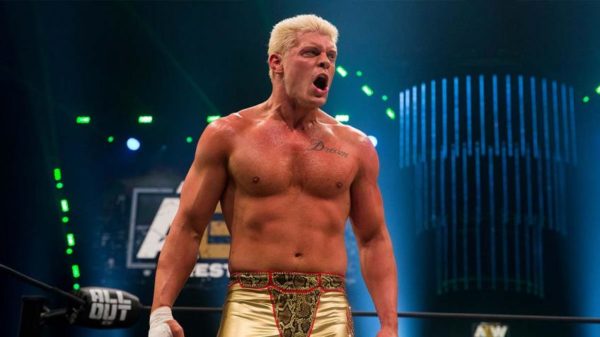 All Elite Wrestling brought in the AEW TNT championship earlier this year, holding a tournament that eventually saw Cody win the belt.

With Jon Moxley holding the world title, Hikaru Shida the women’s belt and the team of Kenny Omega and Adam Page the tag championships, could AEW add another title?

That appears to have been the plan before the coronavirus caused major changes.

“Kenny Omega teased that on the Chris Jericho Cruise that was scheduled February 1-5 they were going to do a tournament to determine the AEW six-man tag team champions,” Bryan Alvarez stated on Wrestling Observer Live. “Now those plans might be out the window.”

Similar to the WWE several years ago, AEW has put together some pretty big factions and groups of wrestlers. That includes many of the top names in the promotion.

AEW was founded in 2019 with Jericho winning the first-ever world title in August of that year. Moxley claimed the belt this past February and has held it since.

Along with Shida, Riho was the first women’s champion and Nyla Rose also held the title. The team of Frankie Kazarian and Scorpio Sky, also known as SoCal Uncensorced, are the other tag title holders.