Upon returning from injury, Edge could land in a WWE Championship program. And, Tegan Nox came out on social media that she is in a lesbian relationship.

There is a possibility Edge could enter into the WWE Championship program once he returns from injury. Also, Tegan Nox went public that she is a lesbian on social media and fans were ecstatic.

Edge coming back after 9 years away was a shock to many people. Everyone, including Edge, thought his career was done after being disqualified to compete due to a neck injury.

That was not the case and Edge returned during the Royal Rumble. Since then, he fought Randy Orton twice; with both securing a win.

During their second bout, Edge tore his tricep. He will miss several months of action and WWE had to change SummerSlam plans.

The thought is WWE will have Orton challenge Drew McIntyre. Wrestling News reports the idea is for Orton to capture the title at some point during this upcoming feud.

From there, Edge can enter the title picture and McIntyre will eventually regain the belt. Also, WWE wants McIntyre to capture the title in-front of live fans for that feel good moment, which did not happen at WrestleMania 36.

“An idea was pitched to have Orton win the title and then defend against Edge at the Royal Rumble or WrestleMania. And McIntyre could win the title again at a later date to get his true crowning moment with fans in attendance.”

Due to COVID-19, WWE has not made many longterm plans. They have Extreme Rules booked and are now focused on August’s SummerSlam.

WWE’s new timeframe for when fans can return is now September. But, that can easily be pushed to a later date. 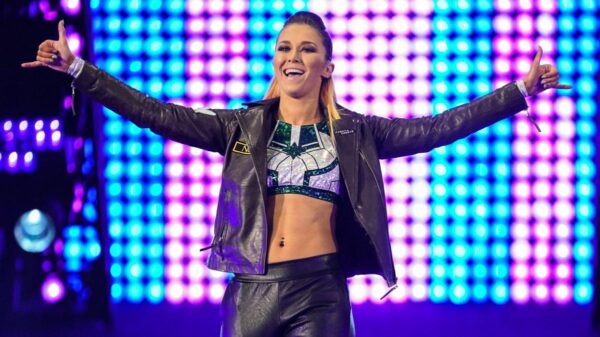 Disney is starting to open up some of their amusement parks around the world after shutting down months ago. There are lots of new rules in place to keep people safe from COVID-19.

Two of their visitors were NXT’s Tegan Nox and a woman named Sierra St. Pierre. Apparently, the two women are together.

They posted the following pictures on Instagram, captioned with colorful hearts and loving life.

It’s hard being the famous one in the relationship…🌈

There were big plans for Nox on two occasions, but both with sidetracked because of major knee injuries. Now, Nox is the current No. 1 contender for the NXT Women’s Championship.

Upon hearing about the relationship, fans (and that includes Wrestle Newz) came out to support the couple.

Tegan Nox has a girlfriend.
Shotzi Blackheart is bisexual.

If Tegan Nox did officially come out tonight then bravo to her. Its never easy to come out, especially for someone in the public eye and I wish her all the best! pic.twitter.com/EXwFrv3hiT

This is so cute! Congrats to Tegan Nox 🏳️‍🌈 pic.twitter.com/GoR7gXSlle

I just love reading men saying they’re disappointed that Tegan Nox is gay, because yeah otherwise i’m sure you had your chances fellas,😂😂

Tegan Nox has a girlfriend I’m so happy for her!!! ❤️💜🧡💛💚💙 (sorry @TheShiniestDan)#SmackDown pic.twitter.com/z0K6jiJ6xs

Tegan Nox living her best life, ya love to see it pic.twitter.com/uct3HxP2Og