For now, Chris Jericho is happy with competing for AEW and is not even thinking about returning to the WWE in the future.

Jericho, during a recent episode of Chris Jericho’s Saturday Night Special, stated that he has no plans to ever return to the WWE and compete for Vince McMahon.

“It’s not going to happen,” Jericho said. “I really enjoy being in (All Elite Wrestling). I loved my time with WWE and Vince McMahon.

“Learned a lot. I had a lot of fun, but listen, you can’t stay in the same place forever.”

The promotion put their world title on Jericho as the first champion in the division.

“You become stagnant (if you stay someplace forever), and I think you need to push yourself to do something new,” he said. “The fact that AEW was live without a net when I fired showed up and all of us have done such a great job of promoting this brand and promoting this company.”

Jericho confirmed that he signed a three-year deal with AEW which will take him into his early 50s when it expires. The part-time rock star is currently 49 years old.

While with the WWE, Jericho was the first undisputed champion while also holding the world heavyweight title three times. He won the WCW championship twice, the Intercontinental belt nine times and the United States title twice.

His last appearance with the WWE came in 2017 at WrestleMania 33. He dropped the United States title to Kevin Owens that night. 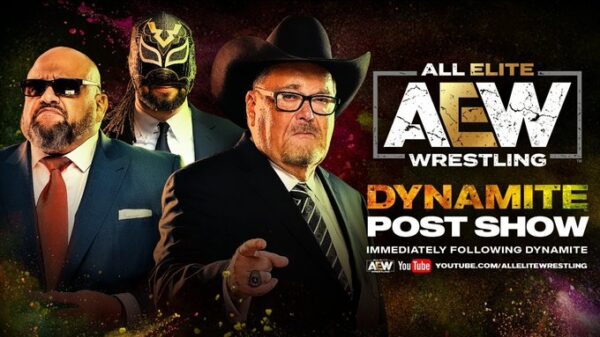 All Elite Wrestling’s Excalibur has come under the fire of many due to old promos shot showing him using a derogatory word.

Marc Letzmann, who goes by Excalibur and is now a retired pro wrestler working as an announcer for AEW, was left off the recent episode of Dynamite after news broke of his remarks.

He was replaced by Taz who worked alongside Jim Ross and Tony Schiavone to call the action on TNT.

In videos that have surfaced from his time working with Pro Wrestling Guerilla, Excalibur is shown using the n-word twice. One appears to show him using the word in a comical way, but the other is more vulgar.

During a live event, Excalibur fired the word off with current WWE superstar Kevin Owens in the clip.

He was one of the six founders of PWG and continues to serve as the “Liaison to the Board of Directors.” During “The Road to Double or Nothing” series, AEW announced Excalibur as part of the team to call the action in 2019.

Since that time, he has joined Ross and Schiavone as part of the play-by-play and color commentary team for Dynamite.

He has not posted anything official on his Twitter page since news of the videos surfacing first appeared.

Pro-wrestling is the best. https://t.co/eaba9rw7OS