Tyson Kidd has not wrestled in five years, but he tried to make an in-ring return for WWE. Also, the reason Alexa Bliss and Nikki Cross were made a team.

Lately, several WWE wrestlers have been getting medical clearance after being told their career was over. Examples can be seen with Daniel Bryan and Edge.

Kidd was looking to write the final chapter of his career, but it was no okayed by WWE. While speaking with Spencer Love on the ‘Conversations With Love’ podcast, Kidd mentioned his neck is not ready for bumps.

During a RAW dark match, Samoa Joe connected with the muscle buster. Kidd suffered a spinal cord injury and needed 16 staples, four screws and a rod inserted in his neck. 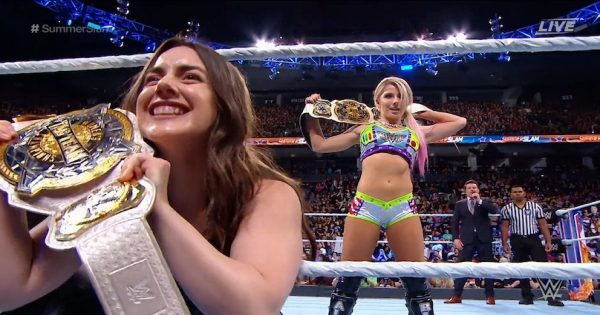 For a time, there were lots of questions surrounding the health of Alexa Bliss. She suffered several concussions in a short time and there was concern about her safety.

So, when Bliss turned face and partnered with Nikki Cross, many believed it was done to reduce risk. Thirsty For News stated that is not the case and WWE’s top dogs like the duo.

Currently, the two are in their second run as Women Tag Team Champions. That alone is a piece of WWE history.

Right now, Bliss & Cross are working a program with The IIconics. There are reports WWE might split The IIconics during the program.