AEW Double Or Nothing saw a new champion crowned, a surprise debut, and much more. Now, let's look at a recap and get some details from behind the scenes.

AEW Double Or Nothing 2020 is in the books and the night saw the promotion continue to grow.

For the second consecutive year, All Elite Wrestling (AEW) held Double Or Nothing. The event was set for Las Vegas, but COVID-19 caused a switch to Florida’s Daily’s Place TIAA Bank Field.

The card opened with the first ever Casino Ladder Match. The winner got a future title shot.

Fenix was removed from the card after taking a nasty landing on Wednesday’s Dynamite. He was replaced by Joey Janela.

AEW President Tony Khan spoke to the media after the event.

“Fenix, it was close; he’s limping,” said Khan. “I don’t think he would have been able to give 100% and also it wouldn’t have been smart to put him out there in that situation.”

“We made a judgment call. I think he’ll be back soon.” 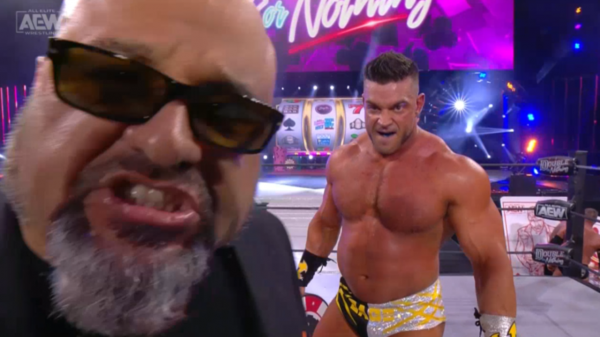 There was a surprise entrant, which ended up being Brian Cage. He had Taz by his side and the former Impact Wrestling World Champion left with the title shot.

Apparently, Cage has been under contract with AEW since January and was getting paid while he healed at home.

Brian Cage, with Taz in his corner, wins the Casino ladder match in his #AEW debut! #AEWDON pic.twitter.com/gT3JrseEu8

I could get real used to listening to Taz cut promos for Brian Cage in AEW.@OfficialTAZ is one of the best promos in the business then, now and forever.

This partnership with Brian Cage could be absolute money!#AEWDoN pic.twitter.com/TS5VeUDPv5

“Brian signed and he was injured when he signed,” said Khan. “There were people who were like, ‘you paid him the whole time he was hurt and he didn’t get hurt in your company.’”

“But I really like Brian and I really believed in him. I wanted this with Brian and Taz all along and there was a method to it, but he wasn’t going to be ready to go until around Double or Nothing.”

“But I always knew Brian was going to factor into Double or Nothing. He was always expected to be cleared in May. So, we signed him, he rehabbed and got ready.”

Now, Cage will take on AEW World Champion Jon Moxley at Fyter Fest. That should take place in about four to six weeks, but more will known on Wednesday.

Khan stated the original plan was to hold Fyter Fest in London. Because of COVID-19 and travel restrictions, that idea was scrapped.

Although, Khan promised that AEW will head to London in the future. Also, catch AEW’s All In pay per view on September 5.

As of now, AEW has not confirmed the location for any pay per views.

During the broadcast, we also learned the extent of Britt Baker’s injury from several days ago. While fans will get more details later in the week, the news is not as bad as expected.

Initially, the running idea was she would miss six to nine months. Khan said Baker was lucky and she will be back much sooner.

Anna Jay was signed, Britt Baker was on her way to being the best heel in the company before she got hurt and they have plenty of good workers already

“Britt will be out, we think six to eight weeks,” said Khan. “Less than two months, ballpark, is a good estimate.”

Other Highlights From AEW Double Or Nothing 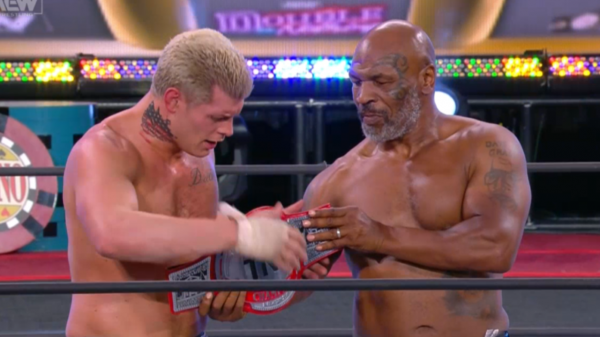 Cody finally has gold, defeating Lance Archer for the TNT Championship. If the belt looked awkward, that is because it is not finished due to the ongoing virus pandemic.

Boxing icon Mike Tyson presented the title and nearly got physical with Jake “The Snake” Roberts.” Tyson did not do much else, but he looked to be in phenomenal shape.

In the main event, Matt Hardy & The Elite were able to defeat The Inner Circle. They fought in the first ever Stadium Stampede Match, which was full of crazy moments.