The Bella Twins are being inducted in the Hall of Fame this year. Now, the twins have revealed how they were told they were going to be inducted.

The Bella Twins are being inducted in the Hall of Fame this year. It came as a big surprise to both Nikki and Brie Bella. During an appearance on WWE Backstage, they revealed how they found out. 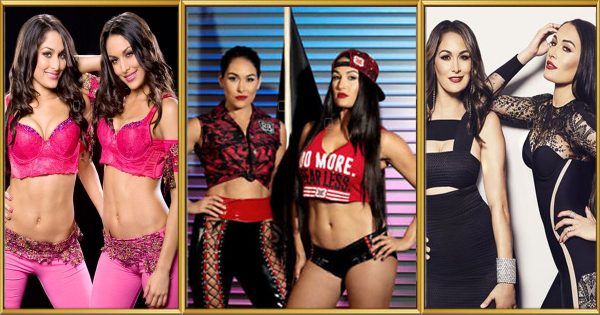 During their appearance on WWE Backstage, Nikki Bella and Brie Bella revealed that Vince McMahon called them to announce the induction. Hilariously, the pair believed that they were in trouble after seeing a missed call from the WWE chairman.

“It’s funny when Nikki and I got the called, Vince [McMahon] called us both. We saw his missed call and my first reaction was, ‘Nikki, what did you say in the press?’ We thought we were in trouble, we called Vince back, together, and when he told us, we were shocked, ‘What? This year?'”

Nikki Bella mentioned this about the induction:

“When you’ve worked hard for so long and have fought for so many things and have the one man who you not only look up to so much, but also gave you incredible opportunity. To have him call and—Vince said the sweetest things.”

"My first reaction was, Nikki what did you say in the press?" – Brie Bella 🤣

While it was expected that Nikki Bella and Brie Bella would be inducted in the Hall of Fame, the announcement came sooner than expected for everyone. After all, everyone expected the twins to return again. Still, their pregnancies do indicate that the twins will be focusing more on home life again. Of course, we can follow the entirety of the magic journey on their YouTube Channel.

We already know that the Bella Twins are both pregnant. Ironically, they are due only a week apart, which certainly makes it a unique experience for them.

Those who still like to follow The Bella Twins can follow a lot of their pregnancy videos on their YouTube Channel. Being the curious creates that we are, we already took a look and picked out some of our favourite and recent videos from the twins.

If you have watched WWE Backstage, but would love to know what happened just before that, the twins did post an update on introducing other WWE superstars to their new baby bumps.

Since their pregnancy, the Bella Twins have been getting a lot of attention. They have been featured on the cover of People magazine. To find out how a photoshoot like that works, you only have to look at their recent photoshoot upload.

A Look Into The Real Homelife Of A WWE Superstar

While we can see some parts of the homelife of WWE superstars in reality shows like Total Divas and Total Bellas, watching the home videos of Brie Bella and Daniel Bryan provides a completely different perspective. From family outings to visits to the local playground, it’s all covered on the channel of the Bella Twins. So, if you cannot get enough of the twins and miss them on WWE television, you can always take a gander on YouTube.