Jon Jones On Possibly Working For WWE, Is Jeff Cobb Part Of AEW?

Current UFC light heavyweight champion Jon Jones definitely seeks a future for himself working in the WWE, and does Jeff Cobb have a contract with AEW?

For the time being, UFC light heavyweight champion Jon Jones remains on top of the mixed martial arts world.

However, “Bones” does still see himself branching off in the future – and not just in terms of competing at heavyweight.

Jones, who is coming off a razor-close decision win over Dominick Reyes at UFC 247, believes it is “inevitable” that he works with the WWE. The former junior college wrestling national champion would be following in the footsteps of many including Brock Lesnar, Ronda Rousey, Cain Velasquez and Shayna Baszler by doing so.

I don’t think people realize how many ways this has been a blessing for me. Humbling, record-breaking, financially, a new rival, got to bring out the dog. #UFC247 is what it’s all about 💪🏾

“I’ve always respected WWE and I feel like the sports can be so similar,” Jones said during a recent interview with Sports Illustrated. “I have the size and athleticism and the following to transition over really well.

“To get the opportunity to just show up, even as a special guest, would be a dream come true.”

That is likely music to the ears of Vince McMahon, as Jones could help boost ratings as a guest host. The genetics are definitely there, as both of his brothers have played in the NFL.

Called our first coaches meeting tonight, excited to figure out what we’re going to do next. pic.twitter.com/65BVqYwkAk

Jeff Cobb Working With AEW As A Free Agent 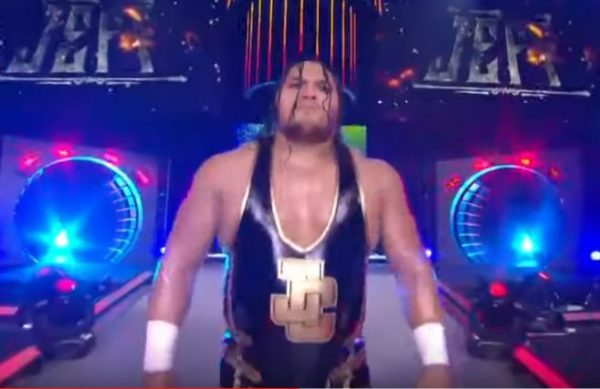 According to a report by Pro Wrestling Insider, Jeff Cobb has not signed a contract with All Elite Wrestling.

Cobb made his debut with the promotion as a gun-for-hire by AEW champion Chris Jericho. Jericho hired the 37-year-old Hawaiian to take out Jon Moxley in a singles match on the next edition of AEW: Dynamite.

The hired gun @RealJeffCobb is ready to make a statement against @jonmoxley!

For the time being, it would appear as if Cobb is part of Jericho’s Inner Circle after helping lay out Moxley. Jericho is scheduled to defend his title against Moxley at Revolution later this month.

COBB BABY!! this is huge and so hyped my guy @RealJeffCobb is going to get to show his skills to a national audience! #AEW pic.twitter.com/gXMqWL3NK0

Cobb is still set to appear for Ring of Honor at Supercard of Honor on April 4. The event, which goes down WrestleMania 36 weekend, would see him team with Dan Maff to face KENTA and Taiji Ishimori.

To find out when #ROH airs in your area click here: https://t.co/94JdX3Mob6 pic.twitter.com/0RzIBtmZFU

Prior to his start in pro wrestling, Cobb represented Guam in the 2004 Summer Olympics. He competed in the light heavyweight freestyle division, and was even the nation’s flag bearer for the opening ceremonies.