Jorge Masvidal could end up facing Conor McGregor if the star beats Donald Cerrone at UFC 246. But, recently "Gamebred" weighed-in on how each man could score a victory in the highly anticipated fight.

The MMA world continues to buzz about the possibility of Jorge Masvidal and Conor McGregor throwing hands. But before that happens, McGregor needs to defeat Donald Cerrone at UFC 246. Well, recently “Gamebred” shared out how he thinks each man could score a win on January 18th. 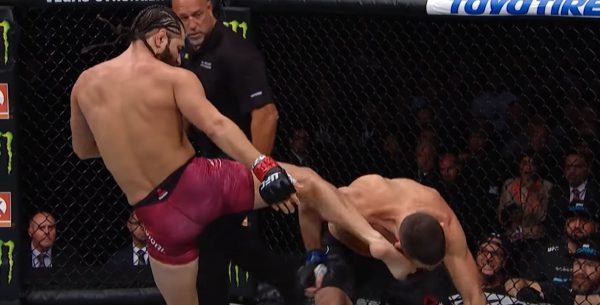 Masvidal outlines keys to victory for McGregor and Cerrone

Masvidal continues to make the media rounds following his massive, 2019 campaign, which saw him defeat Darren Till, Ben Askren and most recently, Nate Diaz. In recent weeks, Masvidal has made it very clear that he’d love to fight McGregor next.

Well, before that can happen, McGregor needs to return to the win column later this month. Masvidal appeared on Ariel Helwani’s “MMA Show”, and when asked for his thoughts on McGregor vs. Cerrone, he said this (quotes via MMA Junkie):

“It can go many ways,” Masvidal said. “Conor is great off the block. He’s phenomenal off the start. ‘Cowboy’ is a slow starter. Conor has tremendous speed and timing in the beginning, good power, so I think he can catch him early.”

“If ‘Cowboy’ comes out to grapple like he has in the past with decent strikers and even good grapplers like Rick Story, who he was able to take down and create a lot of offense like that … if that ‘Cowboy’ comes out, he can mix things up real nice. And then he can start to flow and get into his game of high kicks and punching and being tricky, like a dual threat to Conor.”

“If (Cerrone) just comes out to fight it out, I see Conor winning within the first two rounds.”

This is the take that a lot of people seem to have. If Cerrone comes out, mixes in some takedown attempts and gets out of the first couple of rounds, his chances of taking the fight will rise exponentially. The big question is, however, will Cerrone do this?

So far, based off public comments Cerrone has made, it doesn’t sound like he’s going to do that. Recently “Cowboy” outright said he plans to strike with McGregor, since that’s what “everyone wants to see”.

Now, could that change if McGregor stuns him early on? You would think so right? Then again, maybe Cerrone’s saying this as a means to throw McGregor off?

Here is the complete line-up for UFC 246, which will be hosted by T-Mobile Arena in Las Vegas on January 18th.