Jorge Masvidal Takes Poke at Kamaru Usman, While Explaining Why he Wants Conor McGregor Next

Jorge Masvidal is knocking on the title shot door at welterweight. But, "Gamebred" recently took a verbal jab at the champ Kamaru Usman, while explaining why he's hoping to battle Conor McGregor next.

On account of Jorge Masvidal’s impressive and memorable 2019 campaign, “Gamebred” has a couple of intriguing options for his next fight. While it remains to be seen if Masvidal ends up throwing hands with Conor McGregor, it seems pretty clear that’s the fight he wants. 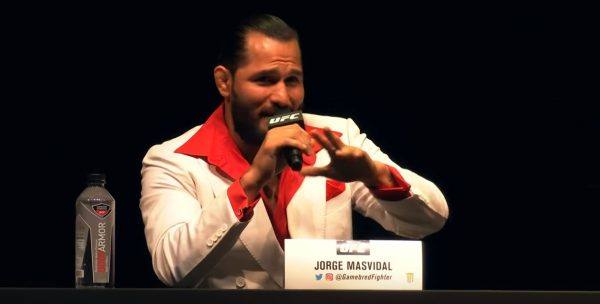 Masvidal takes poke at the champ, while explaining preference for McGregor fight

Masvidal could very well call for a title shot right now if he wanted to, due to his 2019 year. After taking out Darren Till in March, Masvidal knocked Ben Askren out in record fast time this past July. Then in November, Masvidal defeated Nate Diaz via TKO (due to doctor stoppage) in one of the biggest fights of the year.

Well, since the champ Kamaru Usman is coming off a stoppage win over Colby Covington, the consensus is that Masvidal’s next in line for a title shot. But, while speaking to Ariel Helwani recently, Masvidal outlined why he’d rather fight McGregor next (quotes via MMA Junkie):

“I would want that fight because it’s a big money fight,” Masvidal said. “It’s a two-time division champion, and he has an impressive record, and he comes to fight. So in that aspect, yes. We’re going to both sell out wherever we’re (expletive) fighting at, and it’s going to be violent. But if the dude doesn’t want to fight, I’m not a bully. Go do your thing. If he doesn’t want this, (expletive) him. You either want it, or you don’t. It’s fine if you don’t.”

Now, if you’re wondering about the “owl” remark, it’s because recently Usman has asked “who” Masvidal is…

Will Masvidal get his wish?

You can understand why Masvidal feels this way. The veteran has repeatedly said that he wants to score the biggest check possible for his next couple of fights, and there’s no doubt that a fight with McGregor would deliver more cash than a bout with Usman. Further, Masvidal’s 35 now and his star has never shone brighter. So, the time is right to cash in.

But, in a recent interview McGregor did, he didn’t shoot down the possibility of fighting Masvidal, but he didn’t really jump on the possibility either.McGregor also talked about fighting Justin Gaethje next. So, it’s not really clear if the star will push for a bout with Masvidal, if he beats Donald Cerrone on January 18th.