The Most Unforgettable On-Screen WWE Weddings

There have been numerous WWE weddings over the years, which built up to a match or a feud. But which were the most unforgettable among them?

The Most Iconic WWE Weddings: Randy Savage and Miss Elizabeth

If we would have to choose the most iconic wedding, it would have to be the Randy Savage and Miss Elizabeth wedding. Randy and Elizabeth were a real-life couple and they eventually partook in an on-screen wedding at Summerslam 1991. 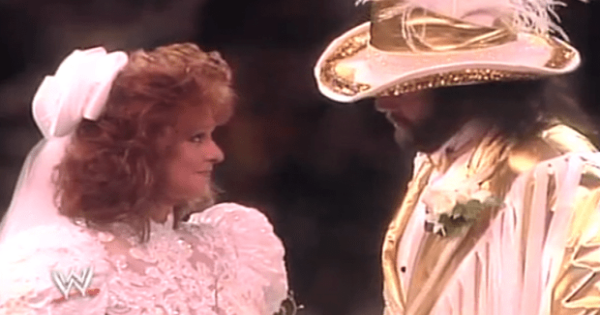 Unfortunately, things would end in tragedy for both Miss Elizabeth and Randy Savage several years later.

Still, this wedding is one of the most memorable.

Triple H Ruins The Wedding Of Stephanie McMahon And Test 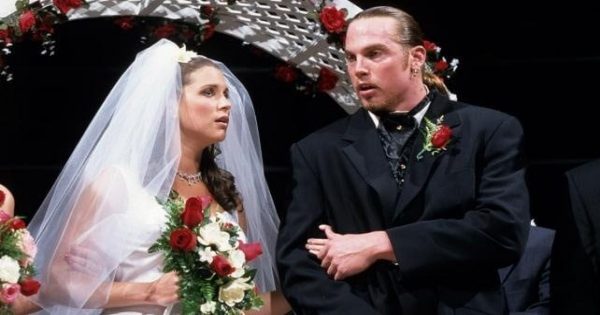 The wedding would not go as planned, as can be expected for a WWE wedding. Triple H turned up and put a video on the Titantron, which showed Stephanie drugged and being married to Triple H in Las Vegas.

The Most Fake Of WWE Weddings: Billy And Chuck

There have been plenty of weddings with ulterior motives, but none so memorable as the wedding of Billy and Chuck. Heels Billy and Chuck were on their way to have the first same-sex wedding on the WWE screen.

Of course, the wedding turned out to be a stunt and the officiator was none other than Eric Bischoff.

Talk about an unforgettable moment!

The Most Inappropriate Wedding Dress: Lita And Edge

The prize for the most inappropriate wedding dress goes to Lita, even though we totally love it! Still, the dress is not what made this wedding memorable, although it might be for many men out there.

Of course, Kane ended up interfering and tombstoned the priest who was officiating the wedding. As we have seen from some of the previous wedding ceremonies, it is a bad thing to officiate any wedding when you’re in the WWE.

The Messiest Of WWE Weddings: Lita And Kane

Lita has married a few times on screen in the WWE. In addition to Edge, she also married Kane on the big screen. Of course, there was a mess of a storyline to accompany it.

Before the wedding took place, Lita was abducted by Kane. She later revealed that she was pregnant with his child.

At the time, Lita was in a real-life relationship with Matt Hardy and the WWE saw a storyline in it. Hardy would try to beat Kane during a match, but bit the dust. This forced Lita to marry Kane.

Even though Hardy tried to intervene at the wedding, he lost again.

The wedding itself was quite messy to begin with, but the aftermath would be even more so. Long storyline short, Snitsky would push Kane onto Lita, who miscarried. Interestingly, this is what put Snitsky on the map as a wrestler. Only in the WWE…

The Creepiest Wedding: The Undertaker And Stephanie McMahon

Imagine being the daughter of a millionaire. Then, imagine being sacrificed during a dark marriage to the company’s creepiest employee. Well, this is what happened to Stephanie McMahon in 1999.

For the storyline, Stephanie was abducted by The Undertaker, who played the role of creepy cult leader. She was strapped to The Undertaker’s symbol and forced to marry him. Just when it seemed like Taker would succeed with his evil plan, help came from none other than Stone Cold Steve Austin.

Triple H And Stephanie McMahon (Not The Real Wedding)

We all know about Stephanie McMahon’s iconic scream, and this is its origins. A wedding everyone from the Attitude Era remembers.

Stephanie McMahon and Triple H are married in real-life, so watching this becomes even weirder when you know that. Long story short, Stephanie pretended to be pregnant to get Triple H to marry her. During the ceremony, Triple H revealed he was aware of her lies and the wedding promptly ended.

However, in real-life Stephanie McMahon and Triple H have been married for a long time and have three lovely children.

There have been some strange weddings in the WWE over the years, but this one probably sticks out for most. The relationship between Edge and Vickie Guerrero was difficult to believe, but it led to one of the most unforgettable weddings in WWE history.

Over the course of the storyline, Edge and Vickie got engaged. It would eventually lead to a disastrous wedding ceremony, where Vickie saw a video showing Edge getting a little too close to their wedding planner Alicia Fox.

The Most Psychotic Wedding: Daniel Bryan And AJ Lee

The wedding between Daniel Bryan and AJ Lee was incredibly disastrous. Lee did the iconic ‘yes’ chants, making people believe she was saying yes to Daniel Bryan during the wedding. However, this was not the case, as AJ Lee became the new Raw general manager.

Once AJ Lee became GM, she started torturing Daniel Bryan. However, it led to something great, as this was the start of the ‘Yes’ movement and Daniel Bryan’s rise to the top.

Which Was The Most Memorable Wedding? 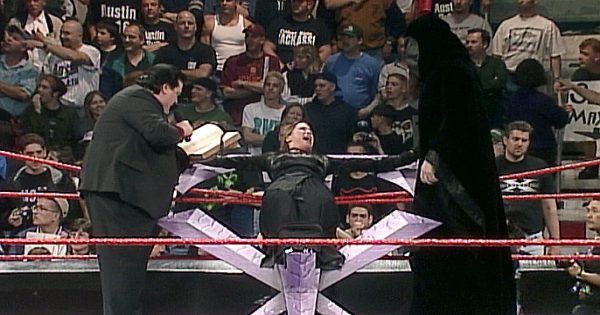 Since Stephanie McMahon was in almost every wedding in our overview, it is not surprising she took the win. The wedding between her and The Undertaker was the creepiest ever, and it included several fan favorites such as Stone Cold Steve Austin and The Undertaker. Even the iconic Paul Bearer was a part of this moment.