RAW was supposed to feature the wedding of Lana and Bobby Lashley. Of course, the event hit several snags and left the WWE audience perplexed. 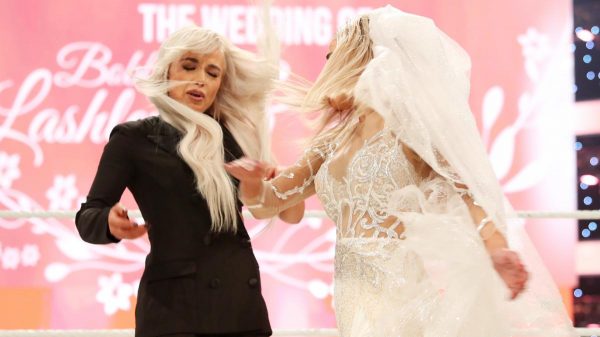 The final RAW of 2019 was supposed to feature the wedding of Lana and Bobby Lashley. Like almost every wedding on WWE TV, the event hit several snags and left the audience perplexed.

While the segment felt like a disaster, it was trending on social media and the YouTube clips have already surpassed 1.5 million views. RAW actually ran over for about 10 minutes, which is something that stopped earlier in the year.

Before the couple could say ‘I do,’ there were several interruptions. First, Lana’s husband objected and then Lashley’s wife did the same. Who knew they were married before? Both of the people, played by Indy talent, were physically handled.

We have… ANOTHER objection?!

Then, came a bigger twist as Liv Morgan returned to TV. She has been basically absent since the Riott Squad was broken up. The past few weeks, including that very night, saw promos about her return.

Fans might not have recognized her at first, but she got the crowd to pop. She explained that she always has been in love with Lana and the feeling was mutual.

She was attacked by Lana as security attempted to escort her from ringside. Then, to the surprise of nobody, Rusev appeared from the giant cake inside the ring and attached Lashley. Morgan returned and went after Lana.

In the end, Lana and Lashley were not able to tie the night. RAW went off the air with Rusev and Morgan standing tall as Lana cried on the canvas. WWE uploaded video after the show, which saw Rusev and Morgan toss cake at Lana as the crowd headed home.

The #LanaLashleyWedding on #Raw did NOT go as @LanaWWE had planned!

But hey, at least there was cake! 🍰 pic.twitter.com/bdMB2K55HP

CM Punk has never been afraid to share his thoughts if WWE is doing wrong to the fans. So, it should come as no surprise that he seemed to address the flawed wedding.

WWE needs to hire people who actually understand what representation means to the audience they’re trying to reach. But what do I know? I’m a bear, I suck the heads off fish. pic.twitter.com/qRUYpgylyS

There will be no Punk on WWE Backstage this week, but he will appear in a few weeks. It should be interesting to hear what Punk has to say, especially after the ratings for RAW come out.

Mandy Rose And Sonya Deville Also Do Not Seem Happy

Besides Punk, Mandy Rose and Sonya Deville chimed in. Both did not seem too pleased with the segment. Deville, who is openly gay, has teased a lesbian angle with Rose on-and-off for the past year.

Welp… my mind is blown.

The final RAW left fans and their own superstars talking.