Right now, there are several WWE superstars across all brands dealing with various injuries. Also, one NXT name has been promoted to the main roster.

Like any business, there are bound to be injuries that must be addressed. Right now, there are several superstars across all of the WWE brands that are dealing with injuries.

EC3 Dealing With A Concussion

EC3 is currently dealing with a concussion, which is one of the most scary injuries as there is no timetable for a return. The Wrestling Observer Newsletter stated the injury occurred at the end of September. That means, his last match was a loss teaming with Eric Young against Lice Dorado & Gran Metalik on Main Event.

Will there ever be plans for EC3?? What was the point of signing him?? #RAW 😒 pic.twitter.com/Gatmb3lrgh

Since returning to WWE, EC3 has done very little. The RAW superstar held the 24/7 Championship for a bit, but he never found the same success like in Impact Wrestling.

Ilja Dragunov Out With Undisclosed Injury

NXT UK’s Ilja Dragunov is out with an undisclosed injury. He was supposed to work the wXw main event this week, but was pulled by WWE. Fans last saw Dragunov on TV this month, where he secured a no disqualification win over Wolfe.

My heart, my soul dedicated moments before the cannons are firing. https://t.co/KdhJv73m0c

As seen on NXT, Bobby Fish was hurt minutes into his tag team title match against Keith Lee & Dominik Dijakovic. When Lee sent Fish to the outside, Kyle O’Reilly did not catch his partner the right  way.

While Fish was later seen walking backstage, there is some fear that he suffered a concussion. Due to the Freebird Rule, Roderick Strong was able to replace his Undisputed Era stablemate on Wednesday’s NXT to retain the titles. WWE is yet to provide an update on his injury.

How good is @roderickstrong. Not only did he have 2 great matches last weekend but on Wednesday he came & replaced Bobby Fish when he got injured, had no 0 time prepare, wrestled in Jeans & helped pull off an amazing match. Roddy truly is amazing & that is Undisputed! pic.twitter.com/326rHr4Ksl

Man Bobby Fish did take a tough tumble in that match 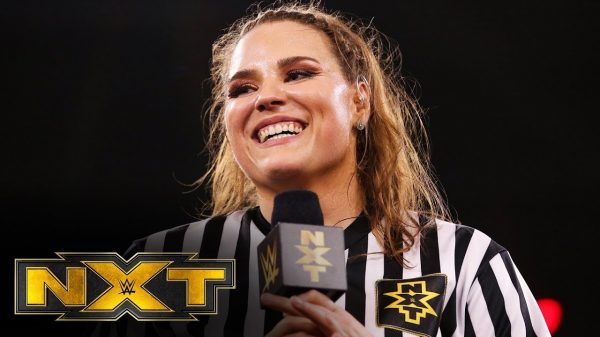 There is some good news as an NXT referee has been promoted to the main roster. After this week’s NXT main event, Tommaso Ciampa announced that Jessika Carr is headed to SmackDown.

The former NXT Champion helped the Full Sail Arena crowd bid farewell to Carr. As seen below, Carr also took the mic to thank the crowd for their support.

With Carr on the main roster, we continue to see women get a bigger role on WWE TV. It is certainly long overdue and continues to show how women are finally get their overdue spot.