SmackDown In A Nutshell: Blue Brand Nearing Final Build Up

Just two weeks away from WWE's SummerSlam, the blue brand show begins its final four hours of hype between this week and next.

We have but two SmackDown Live shows left between now and SummerSlam, counting this evening’s fun and frivolity. The blue brand is nearing final build up for the big summer event. After a strong RAW the night before, one could argue that the pressure is on SmackDown and new man in charge Eric Bischoff to deliver a stellar show on Tuesday. Will it happen? Let’s catch this week’s two hours of sports entertainment and see how things play out…so sit back, relax and crack open this Nutshell!

Flip a coin here…I could go for either our opening match which saw Kevin Owens battle Drew McIntyre, or I could go with the main event spot between Kofi Kingston and AJ Styles. 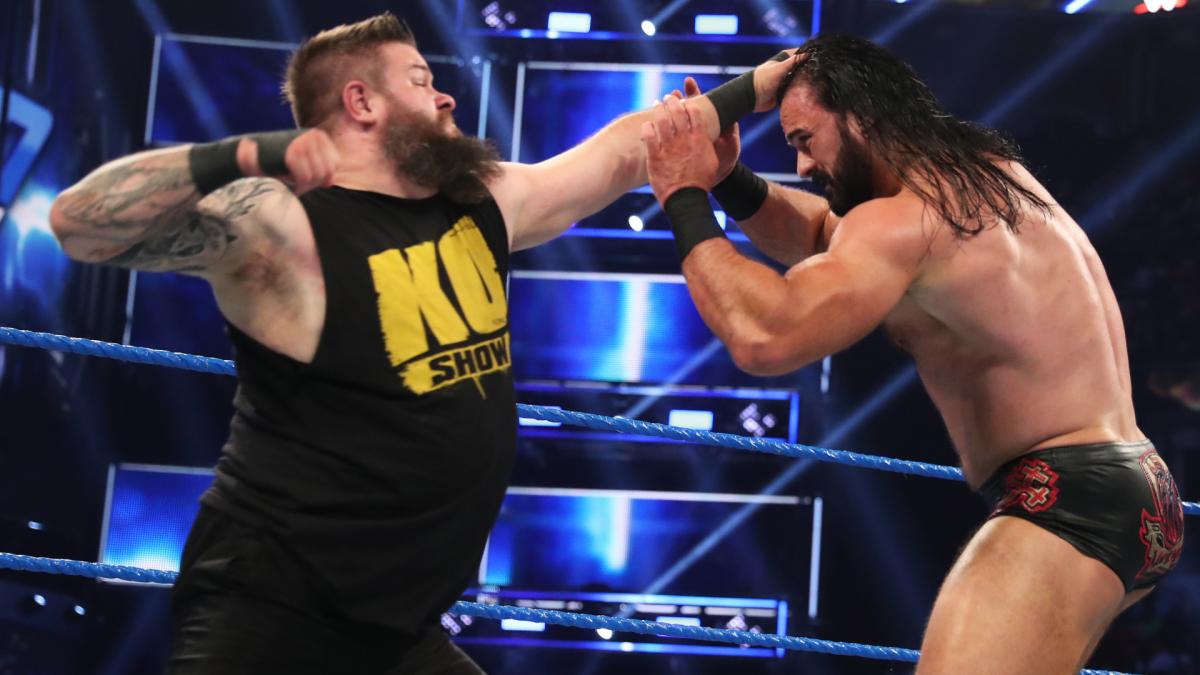 Both matches were really good.

If there’s a knock on either, the beef would be with Owens/McIntyre, because that could be seen as a premium-type match, and we got it with not a lot of hype, and Drew took a clean pin.

Nakamura and Ali. I like both of these guys, but it’s going to be damn near impossible to have a good match with as little time as they were given. 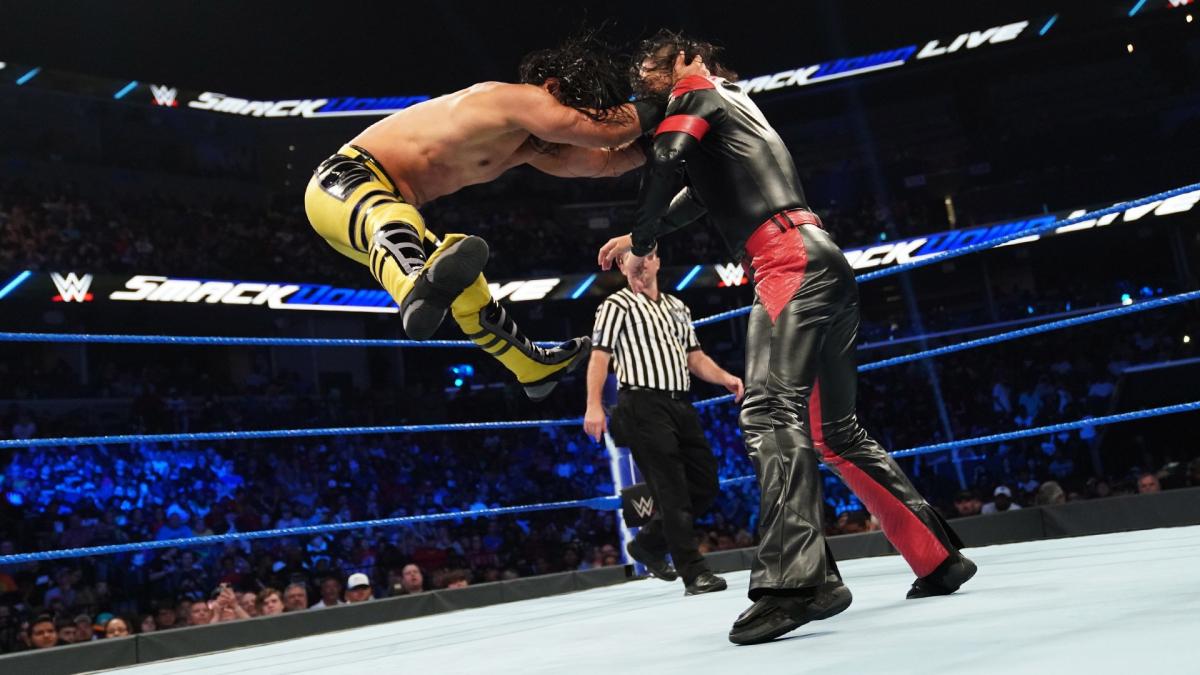 This lands here not because the match sucked. No, it lands here because either someone did a bad job on time management (like, was this match supposed to have more time but it got cut?) or because someone actually planned to only give these guys two minutes.

If it was cut short because of other over-runs, I’d rather it have been pulled, or turned into some backstage altercation to set them up for a SummerSlam match.

Now, this is a tough one, but I’ll go to my favorite 3 stars of hockey method to make it a bit easier…

1-Kevin Owens. He’s been the hot hand lately, and that did not change this evening. 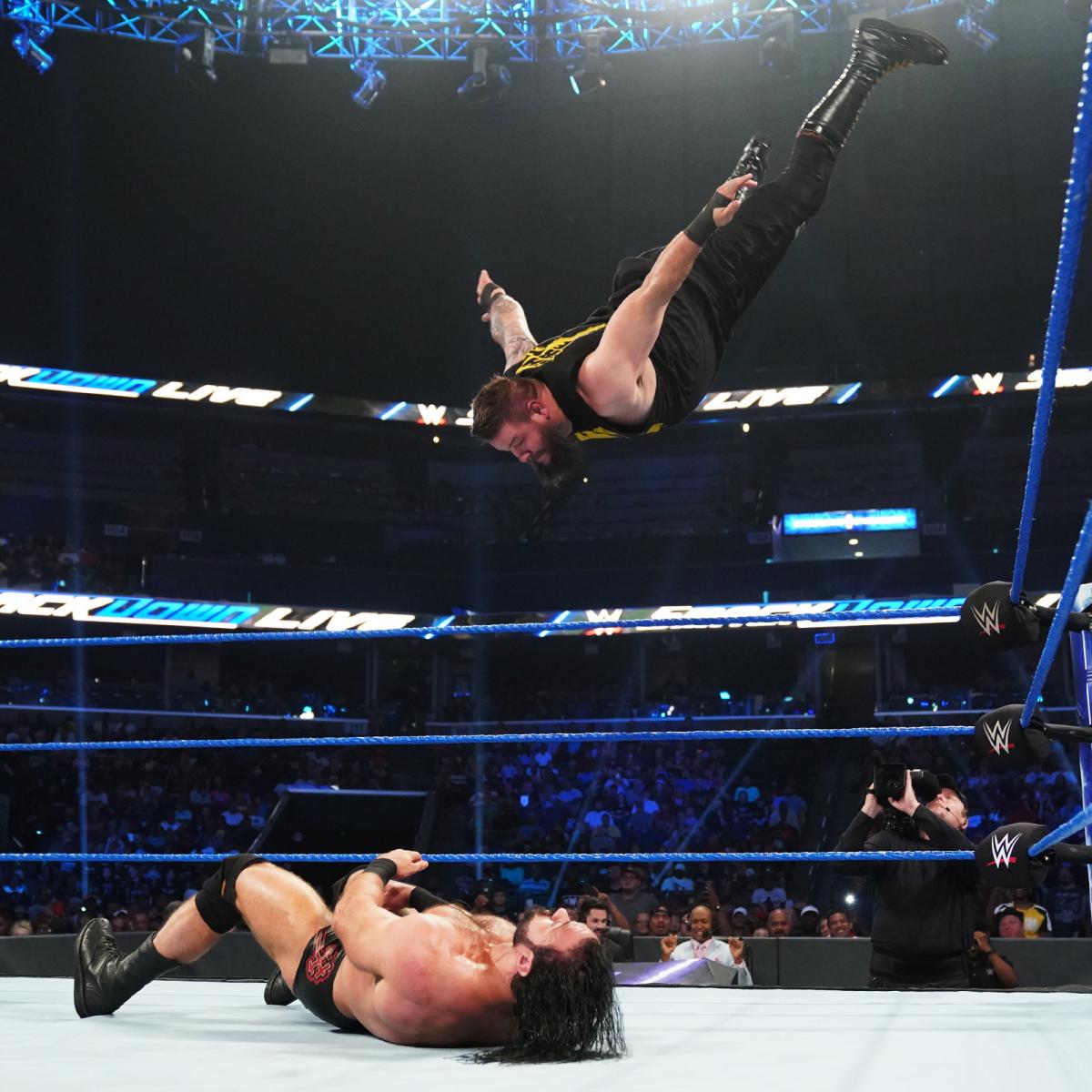 2-Jerry Lawler. The King, in his home town of Memphis? You knew that was going to go over well with the crowd. 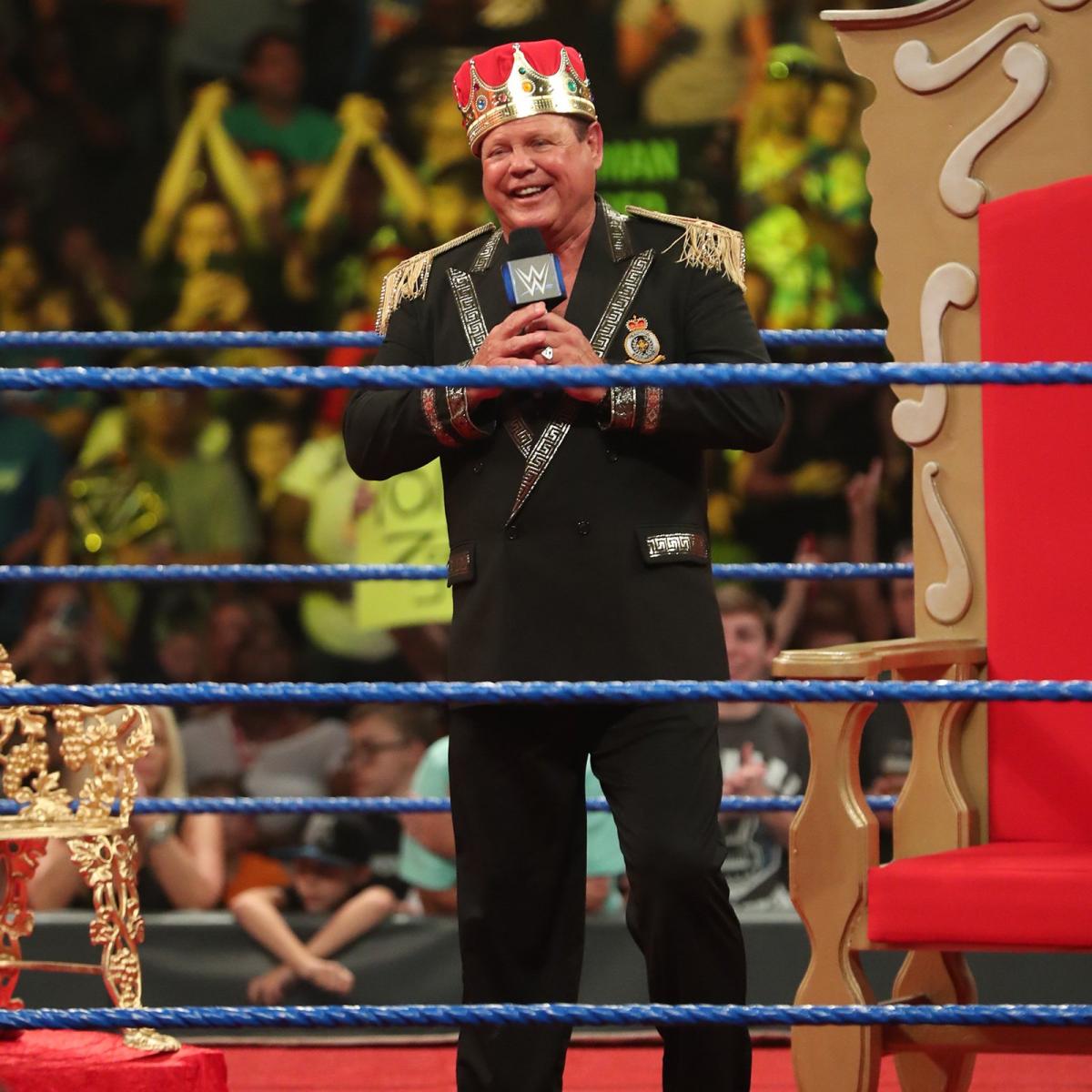 3-Trish Stratus. Fans left Totally Stratus-fied, as Trish was challenged to a match at SummerSlam by Charlotte, and the Hall of Famer accepted. 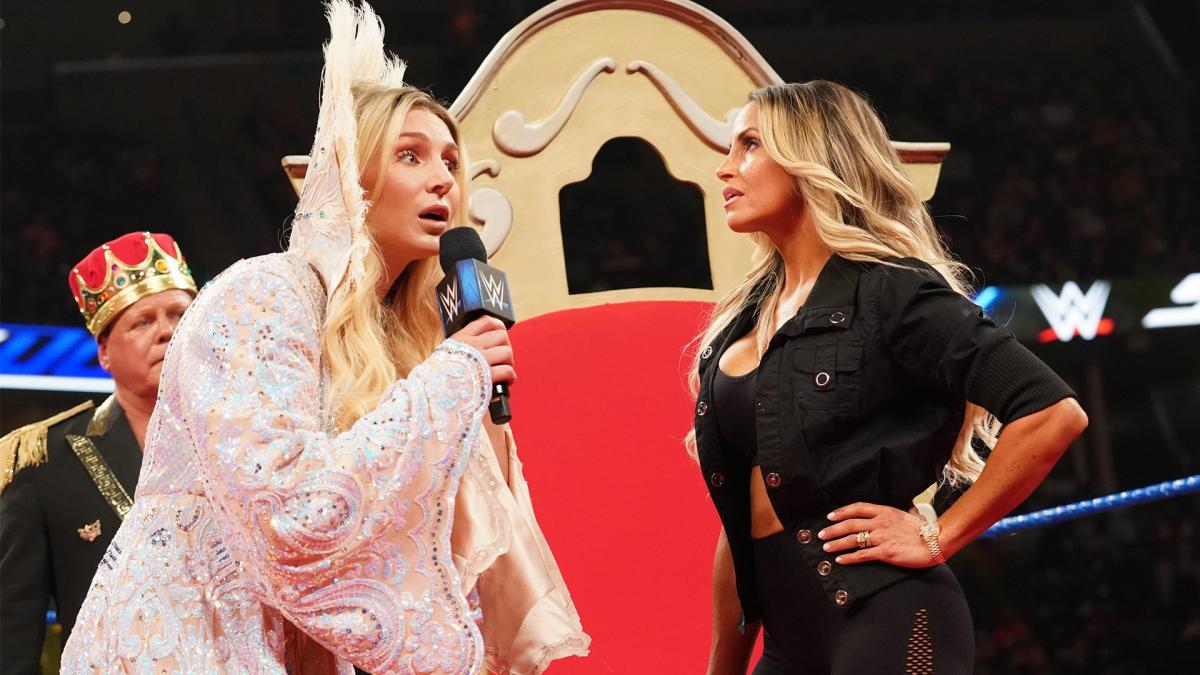 For me, it has to be Kofi nailing Trouble in Paradise on AJ Styles, as Styles had leaped off the top rope. Nice timing, move looked well executed. 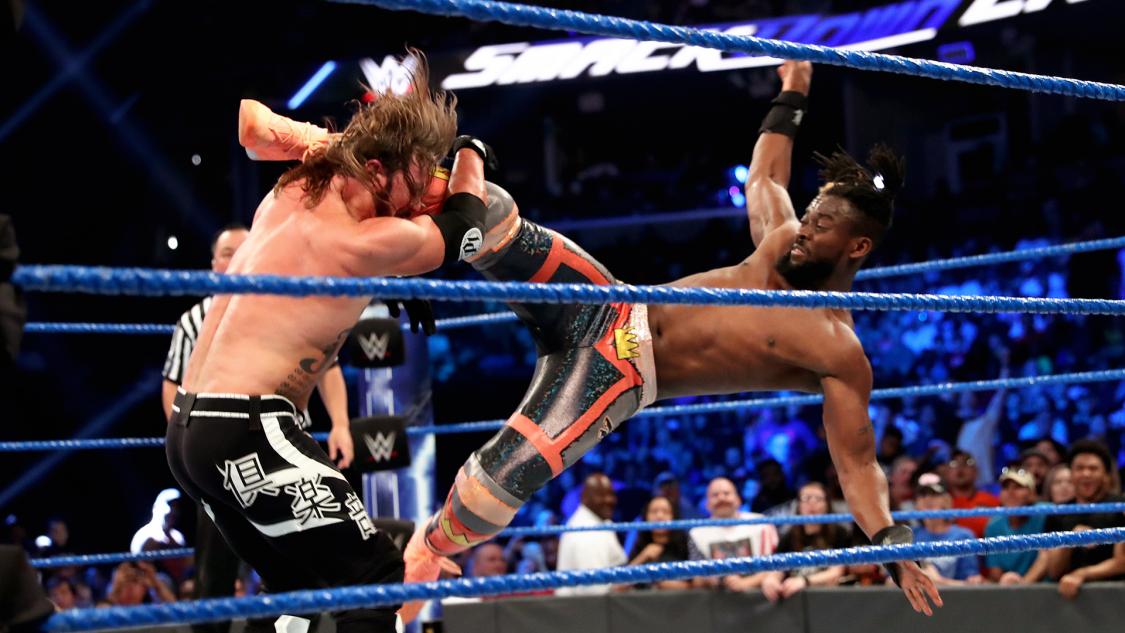 Maybe it wasn’t a botch…but it was really bad.

The final segment of the night was supposed to be Roman Reigns talking to Kayla about SummerSlam. She said as much, well before he was with her. And then we saw cameras following him walking up to her, way ahead of where she was conducting interviews, and in a manner that is not usually used otherwise.

It was abundantly clear to anyone that, as soon as the cameras were following Reigns before he reached the interview area, that something would be happening to him. Initially the thought was just for a simple beat-down by Samoa Joe. Instead, we got falling containers and set pieces, and when things were moved away, it sure looked like Reigns was merely “dazed”

I’d want to say Stratus coming back for one more match at SummerSlam, except the rumblings were out there last week…so it wasn’t exactly a surprise.

Plus, with the contrived interview with Lawler, it was kind of obvious.

This is the downside here…clearly (I’d think) this match didn’t just get pulled out of thin air last week. WWE had to have been planning, or at least kicking the idea around, for weeks or months. They could have at least planted seeds better.

That said, the fans still love Trish. Was a nice moment.

Another week, another lack of announcement from Daniel Bryan.

Stratus is coming out of retirement for a match with Charlotte in a couple weeks.

Roman Reigns “survived” backstage props “falling” on him…but we aren’t being told it was Joe yet.

I hated the final segment. Not because we don’t know who did it (fairly certain anyone with a pulse and who has been watching of late knows which way to go here), but because it was overly fake, even by sports entertainment standards.

It was up there with that time where WWE cameras were already in the back of a car, as if they knew someone was going to go through the closed car window….

Kevin Owens has been and continues to be outstanding.

Owens and Drew McIntyre had a great opening match.

Kofi versus AJ was, well, phenomenal. You can easily see WWE start a slow burn (maybe) on a future six man tag match…or possibly a Survivor Series match if each team adds one or two (say, Finn Balor wouldn’t happen to know of any other Club members in WWE, would he?)

All in all, a good show. I don’t consider it to be quite as good as last night (let’s be honest, the last 45 minutes of RAW was some of it’s best in years), but it was good enough.

Next week ought to be very interesting.

Why Roman Reigns Won, Is Tom Phillips Gone From WWE