SmackDown In A Nutshell: Next Stop, Jeddah!

This is it folks-the last televised WWE main roster show prior to the company's Super Showdown in Saudi Arabia, which saw Undertaker & Goldberg appear.

This is it folks-the last televised WWE main roster show prior to the company’s Friday Super Showdown in Saudi Arabia. While last night’s RAW didn’t do much to move my needle, here’s hoping that tonight’s SmackDown might fare a bit better. To that end, while RAW had The Undertaker, the blue brand brings out Hall of Famer Goldberg for this show. While it’s all about generating ratings, you’d have thought WWE might have wanted Bill to face off against the man he takes on in a couple days, instead of having them on two different shows. In any case, it’s all about next stop, Super Showdown…so let us crack open this Nutshell!

I was tempted to give this to Lars Sullivan’s mic work, but I cover that in enough detail later on, so I will stick to an actual match.

As much as tonight’s show was better than RAW, there still weren’t a lot of superb matches. 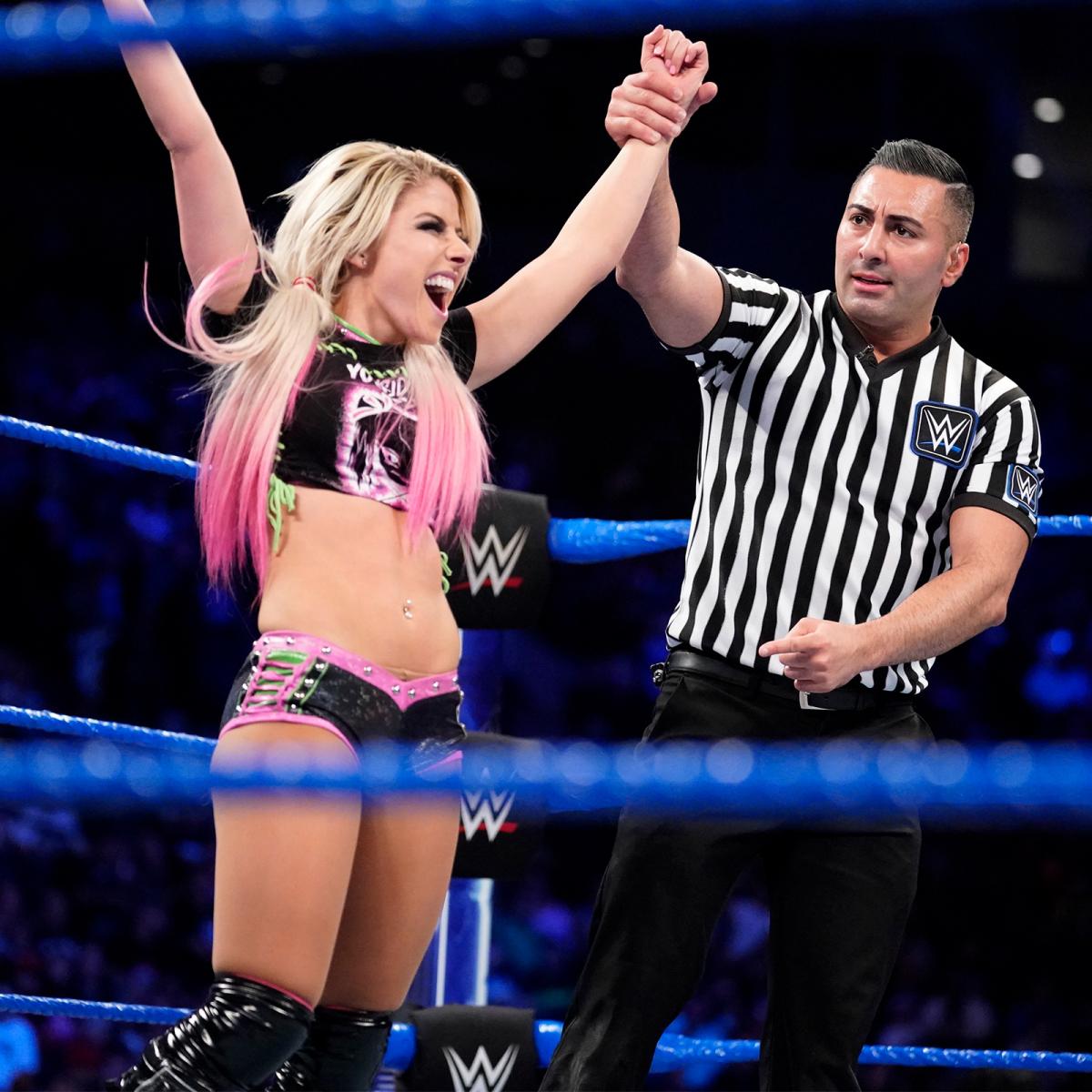 From a wrestling perspective, specifically? The 24/7 Championship lumberjack match was a train wreck. 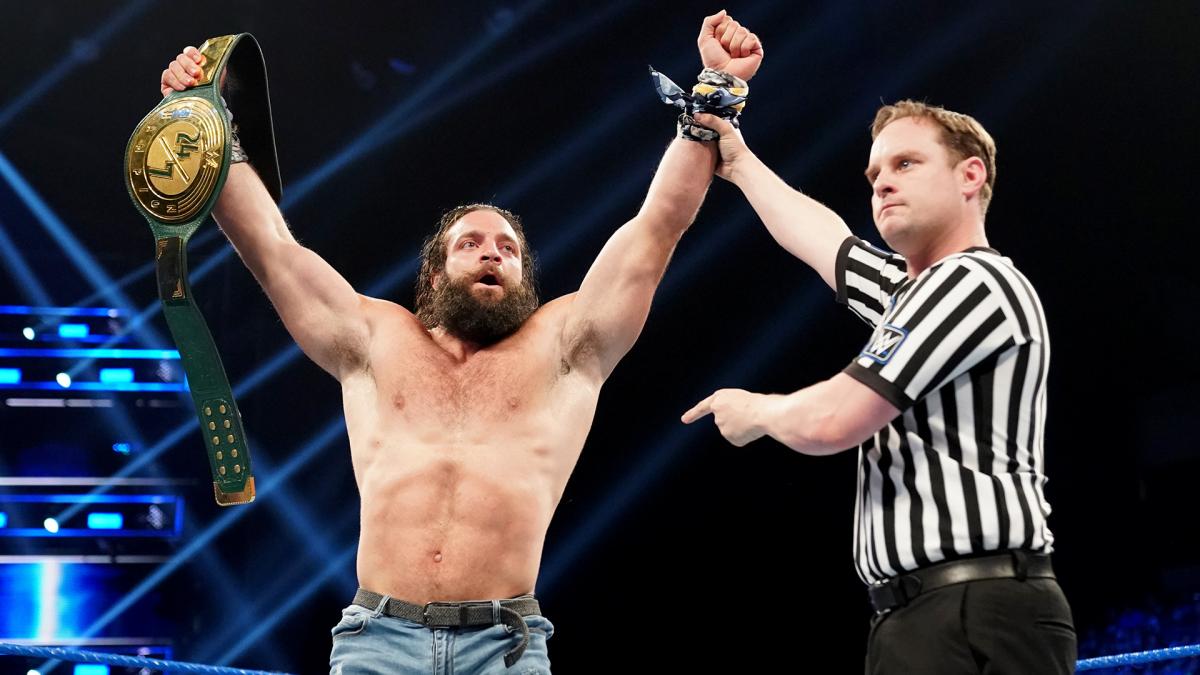 If we see it for the comedy that it is, it was passable. Like…with the crazy rules, you don’t NEED lumberjacks for that match…

I will go with two here…actually three…and none from an actual match. 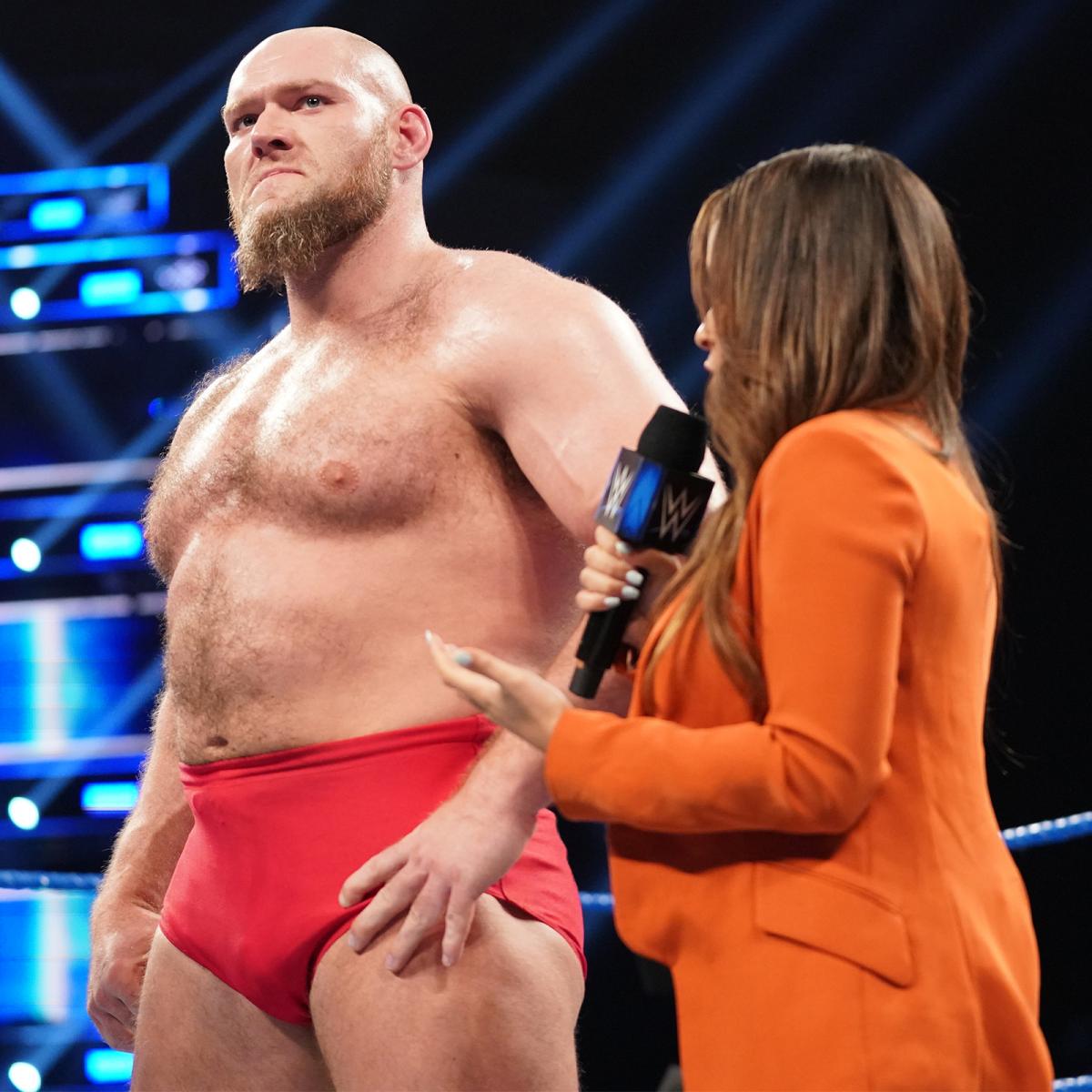 First up, give me Lars Sullivan. Right, wrong or otherwise, I never thought much of his promo work from NXT. Not that I thought it was bad…it just was not something he did a lot of, and it certainly was not what got him to the main roster. That being said, he had an outstanding promo tonight. Like, creepy, chilling, really dark and ominous. For WWE to keep up on this, he pretty much HAS to squash Lucha House Party on Friday. 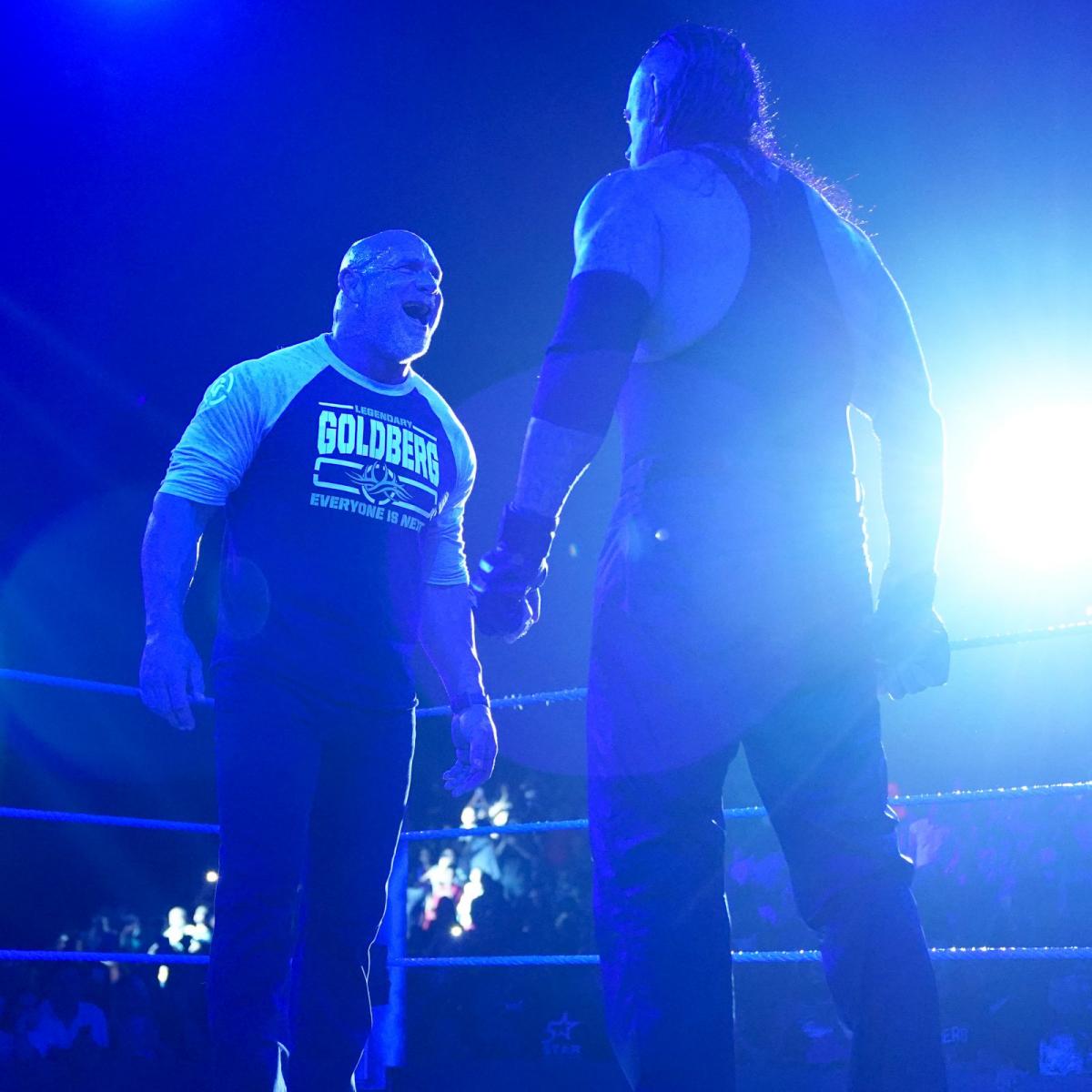 Second and third? Give me Goldberg and The Undertaker. Goldberg had a nice promo for his first-ever appearance on SmackDown. Silly me, I should have been expecting a surprise Undertaker appearance, especially given that Goldberg went off last. They did not get physical, just kept it psychological, which for them is a smart move. Anticipation for that match is decent…makes you wonder if WWE could have trotted that match out for WrestleMania, but Saudi money kept it for Jeddah instead.

Nothing here really, at least not a wrestling move.

The last bit between Goldberg and Undertaker was good. Got the gong. Undertaker of course pops up behind him. Stare down. Gong again and gone. 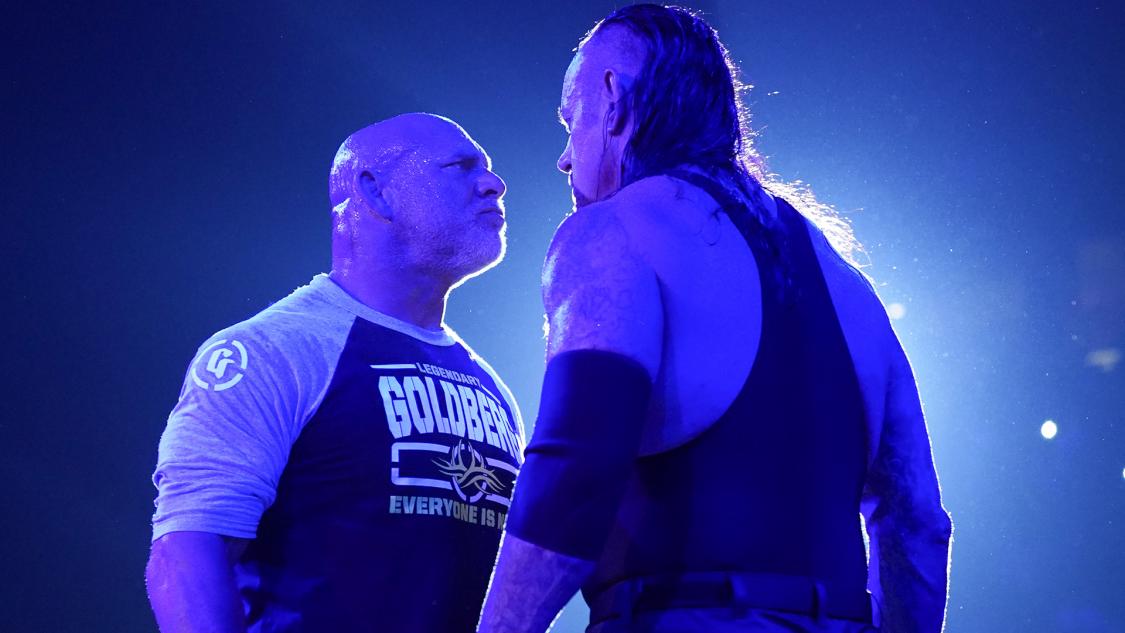 No physicality required, but that right there was the best spot of the night.

The surprise appearance of The Undertaker. I probably should have expected it, but I did not, so it was nice to be surprised.

LOL of the night

I hate to buy into it…but the 24/7 Championship segment did it for me tonight. R-Truth complaining the belt is ruining his life…losing (and quickly) to Elias…who in turn realizes that all the Lumberjacks from around the ring could (and did) take a shot at him. 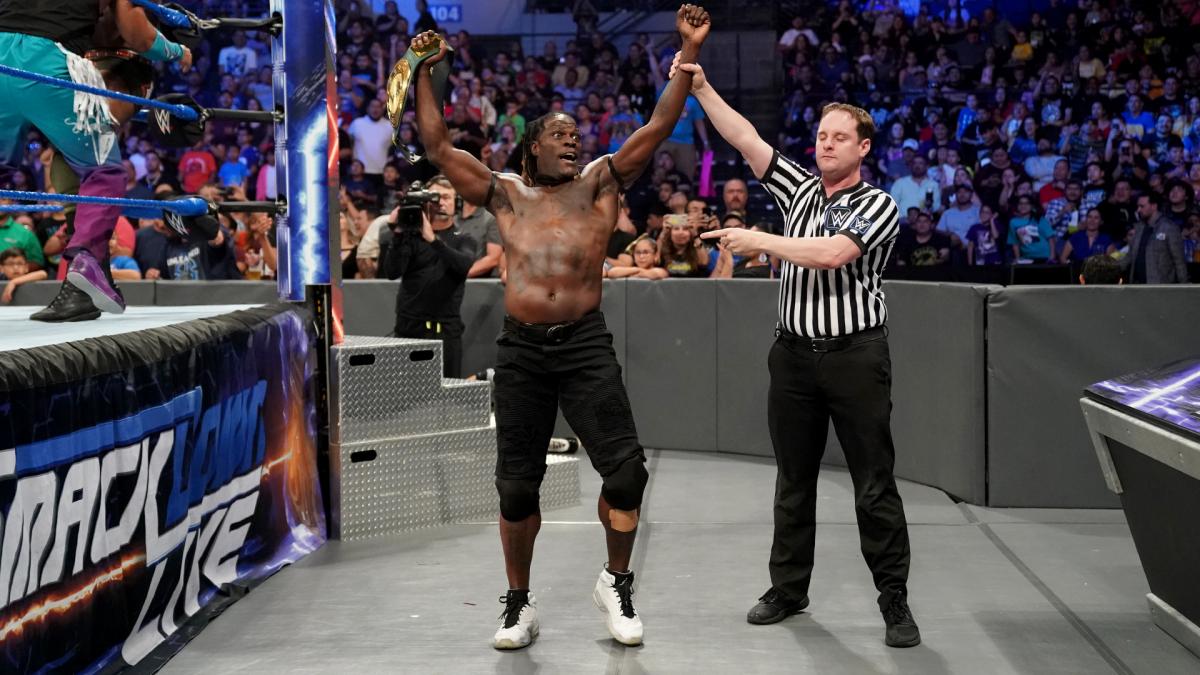 It was, of course, topped off by R-Truth apparently pinning Elias under the ring, to once again become the champ, holding a title that he had just said was ruining his life.

I don’t really want a WWE title to make me laugh, but it is, so I’ll go with it.

Goldberg’s first appearance on the blue brand was big

The Undertaker showing up to welcome him was big too.

Little Miss Bliss is back, earning a chance to be Bayley’s first title defense of her latest reign.

I can’t find a whole lot of anything to really complain about. This is a marked change from last night, so either someone realized how bland last night’s show was, and made sure to avoid it…or we had different writers for each and the Monday choices ended up sucking pond water.

The opening tag match was good.

In general a good show

Wow. That’s my reaction here. Not necessarily a “wow, the show was awesome, best show of the year”, because, well…it wasn’t awesome. But if we are comparing last night to tonight, this show was substantially better. Part of me says it is at least in part because WWE has one less hour to worry about, but whatever the reason, here we are with a better show.