SmackDown In A Nutshell: Next Stop, WrestleMania!

We are now four days away from WrestleMania, the biggest show of the year. We have perhaps the longest show in WrestleMania history, so let's hype it up!

As I sit here taking in SmackDown, we are five short days away from WrestleMania. That means, of course, that by the team you, dear reader, reads this Nutshell, we will have only four more days to go before we reach the Grandest Stage of Them All. It is indeed next stop: WrestleMania, and on this, the final SmackDown prior to that biggest of big shows, it’s all about final prep. Expect the final hype for matches between Miz and Shane McMahon. Perhaps we get some follow up to the explosive situation involving the three women in our ‘Mania main event. And, we also get the ever-entertaining contract signing, this one sealing the WWE Championship match. So lets get right into it and crack open this Nutshell!

To be honest, tonight’s show kind of felt light on matches…especially on good ones. If I must choose a match, I’d lean toward the handicap match, Miz versus Sanity. It was entertaining enough, and it put Miz in a good light. 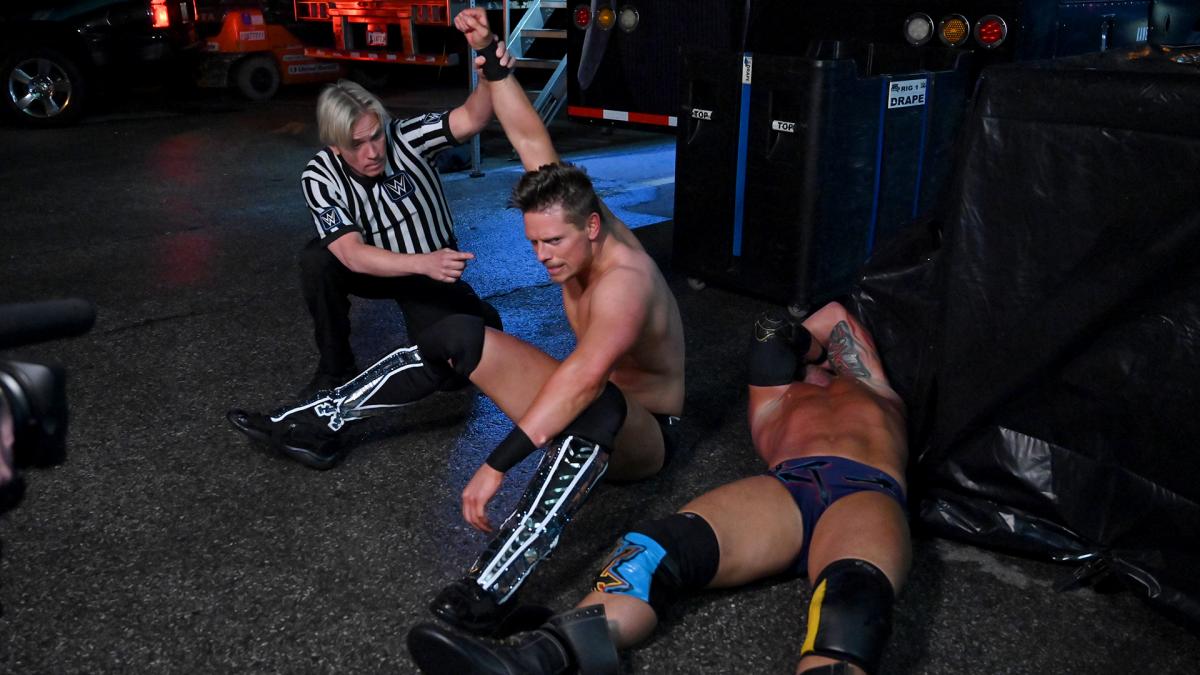 Downside is, it made Sanity look like glorified jobbers.

However, if I think outside the box, I find myself loving how the main event slot was used. It was an interesting contrast from what we got on RAW. Rollins and Lesnar got physical…Kofi and Daniel did not. Daniel Bryan went on and on claiming to know Kofi and wanting to educate us all…and Kofi Kingston went off with a passionate speech as SmackDown went off air. 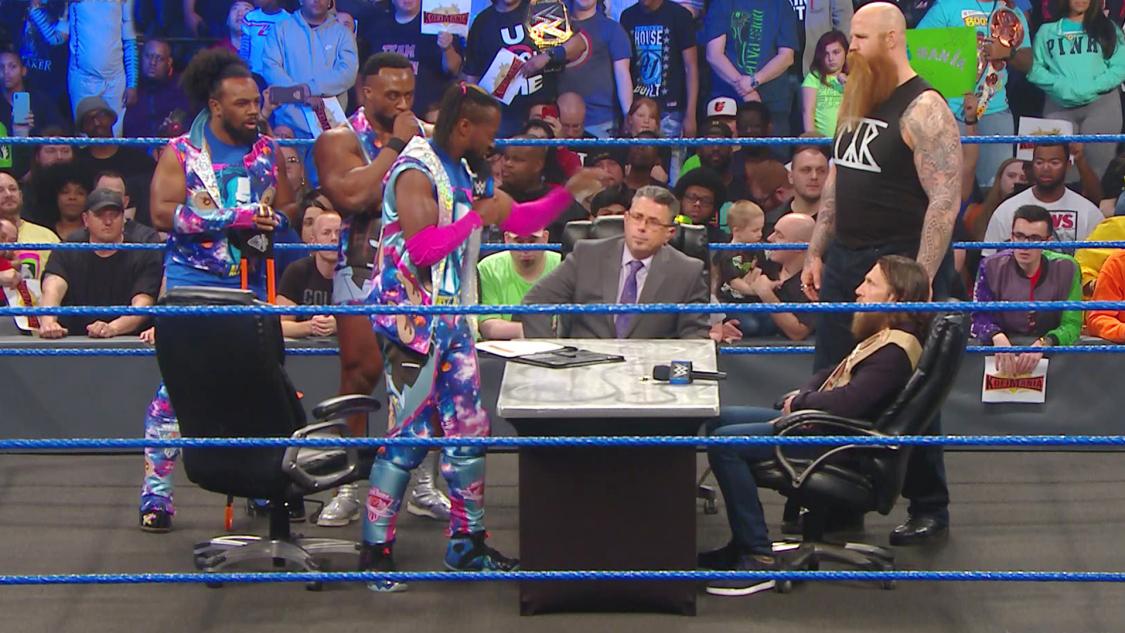 The eighteen person mixed tag match. I mean, it was just a train wreck, as you’d expect it would be. I get why they did that…but it was a train wreck. 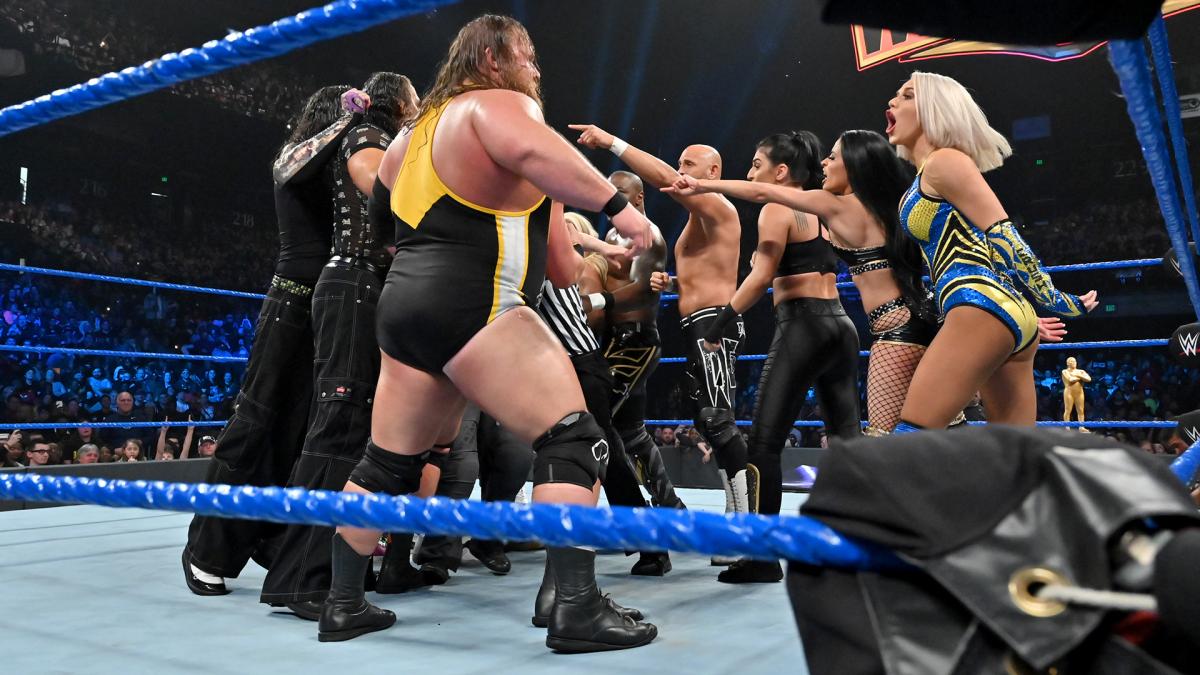 For my money, this had to be Kofi. On the Road to WrestleMania, watching KofiMania be born was a thing of beauty. Ahead of what we hope will be his title win on Sunday, the show-closing promo was a highlight. 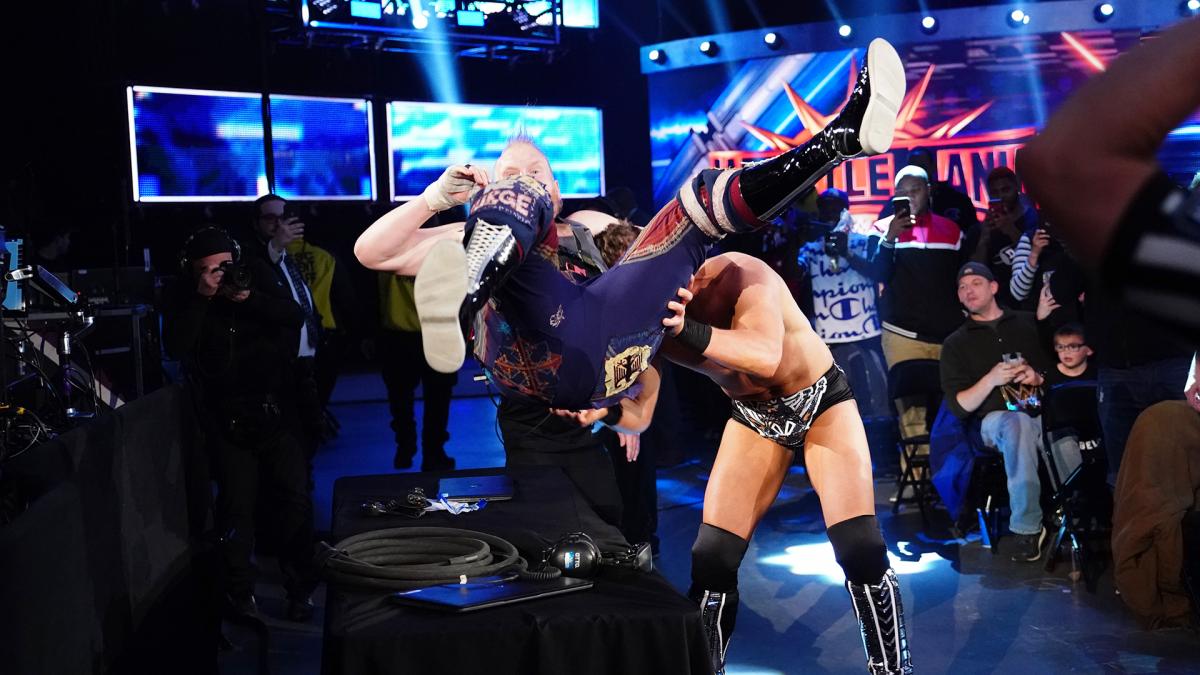 Some creative offense in the one on three handicap match. Alexander Wolfe going through that oddly placed table near the crowd, for example. Also, the work that Miz and Eric Young did on the outside…and let’s not forget, Miz made a dent in the rolling door with the help of Sanity too. Some good action in the match.

And then there is this one… 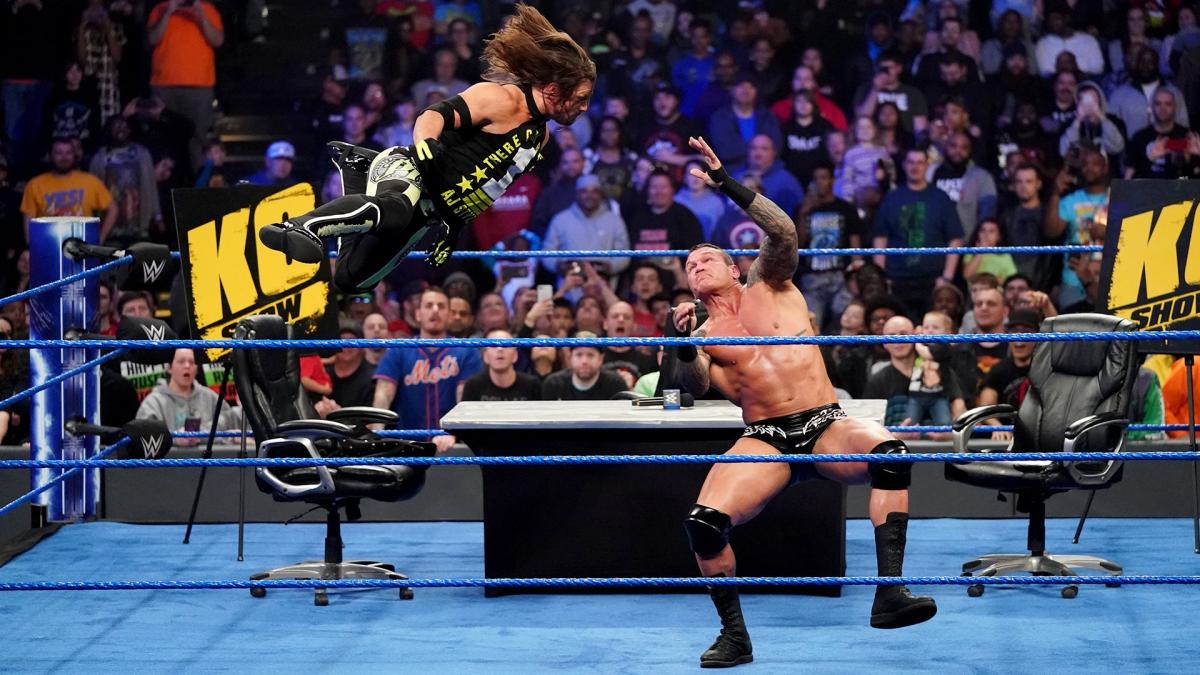 In a way, it was Sanity. Looked better than fake Jost and fake Che on RAW, but a trio losing to a single guy….when it’s someone like Sanity? Yeah…jobbers.

Was a mild surprise to see Becky Lynch (and only Becky) a night after the segment she was in on RAW. Not sure how they pulled off the DC cop dropping her off…unless they just rented the car or something.

Nothing that I caught.

So, New Day was rocking some new Kofi-inspired shirts. Nothing wrong with those. What is funny? That Big E cut out the spot where Kofi’s eyes would be, so that we could see his chest.

Lost in the shuffle was probably The Kevin Owens Show, which served as the vehicle to complete the hype for AJ Styles and Randy Orton. That match is probably going to be sneaky good…but I have a feeling it’s going to be overlooked and forgotten. It may actually wind up being a buffer, sliding in between some higher profile matches.

I like babyface Miz, I really do. I had wondered about it before, and with season one of Miz and Mrs, my thinking was affirmed-he’s a funny and entertaining person, so face Miz works. But tonight’s promo…it was not bad…but it felt lacking something. He made up for it with the match after, but I felt like it was just not as good as I was hoping and expecting it to be.

For me, the best part of the show was the WWE Championship contract signing. Sometimes these things break down into violence. This one was all talk, but a lot of it was very good talk. Everyone might be talking about the women main eventing the show, but Kofi Kingston and Daniel Bryan may be the match most anticipated.

That’s all she wrote folks. We have less than a week to go for the Showcase of the Immortals. Friday gives us TakeOver, then the Hall of Fame ceremonies on Saturday and the main event of the weekend, WrestleMania. We can nitpick some of the build elements across both shows, but it’s a moot point now. Sunday is almost here. Next stop, New Jersey!