Chris Pratt Fires Back After Ellen Page Denigrates His Church

Yesterday, we reported that Juno actress Ellen Page had launched a vile attack on Chris Pratt for his Christian faith. Now, Pratt has responded to Page with the perfect defense of his faith in God.

It all started when Page took to Twitter to slam Pratt for attending a church that she claimed was anti-LGBTQ.

Oh. K. Um. But his church is infamously anti lgbtq so maybe address that too? https://t.co/meg8m69FeF

Fox News reported that Pratt responded with a lengthy Instagram post that blew this claim out of the water.

“It has recently been suggested that I belong to a church which ‘hates a certain group of people’ and is ‘infamously anti-LGBTQ,'” Pratt wrote. “Nothing could be further from the truth. I go to a church that opens their doors to absolutely everyone.”

He went on to explain that his church was there for him during his recent divorce from actress Anna Faris despite the fact that the Bible is against divorce.

“Despite what the Bible says about divorce my church community was there for me every step of the way, never judging, just gracefully accompanying me on my walk,” Pratt wrote. “They helped me tremendously offering love and support. It is what I have seen them do for others on countless occasions regardless of sexual orientation, race or gender.”

Pratt then explained that his “faith is important” to him.

“My values define who I am,” he continued. “We need less hate in this world, not more. I am a man who believes that everyone is entitled to love who they want free from the judgment of their fellow man.”

“Jesus said, ‘I give you a new command, love one another,'” the actor concluded. “This is what guides me in my life. He is a God of Love, Acceptance and Forgiveness. Hate has no place in my or this world.” 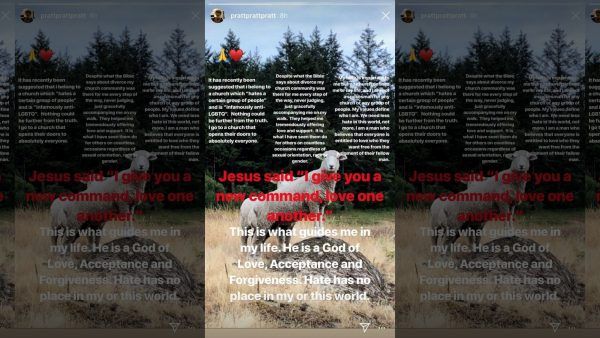 It’s sad that Pratt was put in a position where he had to defend his Christian faith. Had Page gone after a Muslim in this way, she would have immediately been blacklisted by Hollywood and labeled a bigot. Because she went after a Christian, however, Hollywood has no issue with her bigoted remarks whatsoever.

It’s so rare to see an actor like Pratt be so open about their Christian faith. Unlike many of his fellow Hollywood stars, Pratt uses his platform for good, as he has done his best to spread the word of God. We can only hope that Pratt does not let Page’s hateful remarks stop him from doing God’s work and being an outspoken Christian.

Tim Allen Reveals Why He Hasn’t Been Talking About ‘Lightyear,’ Disney’s Latest Flop