The cast and crew of the hit NBC show "Chicago Fire" got a bit too close to the reality of Chicago when a shooting occurred near set.

In an instance of life imitating art, and a bit of art imitating life, the cast and crew of “Chicago Fire” got a bit more than what was on the screen while recently filming in the Windy City.

During filming of the hit crime show, the production needed to halt as both a fire and shootout took place adjacent to the set.

The incident occurred while the NBC series shot a scene at a funeral home.

“Authorities responded to the scene shortly after 1:45 p.m. when an “unknown offender, armed with a handgun shot at a group of people standing in the 5900 block of W. Madison Street” near the Oak Park area of the city.”

Thankfully no one was hurt before the assailant fled in a dark SUV*.

And to make the scene even more surreal, an actual fire broke out around the same time. Needless to say, this caused a bit of chaos. The director of Funeral Home commented:

Unfortunately, crime tends to happen often near on-location shoots in the liberal-run city of Chicago.

Hello everyone. The incident today near the Chicago Fire set is just one in a long line of incidents this year that have impacted shows that film here. The most serious was the shooting on the Justified set, while bullets also hit near the Chicago Med part of the studio..

A gunman opened fire just steps from where the Chicago Fire TV show was filming on the West Side this afternoon. No injuries reported. No arrests made. It’s the latest in a string of scares for the Chicago film industry.https://t.co/z9YYw8fe8N

This isn’t the Dick Wolf show’s first brush with the law, either.

“Last month, Chicago PD reportedly ordered two commanders to divert officers to production sets after authorities responded to an incident where a suspect “lit and threw an unidentified object” near a film set at the University of Illinois.”

Is Crime In Chicago That Bad?

Chicago, despite its reputation, is not the most dangerous city in America, though it does have very high crime.

According to the latest stats (violent crime per 100,000), the Windy City is:

However, Chicago’s problems are not city-wide and are primarily concentrated in the city’s Southside, and when you compare the safest to the most dangerous neighborhoods in the Illinois city, the differences are striking. The 90.5 homicide rate towers over St. Louis’s rate of 66. 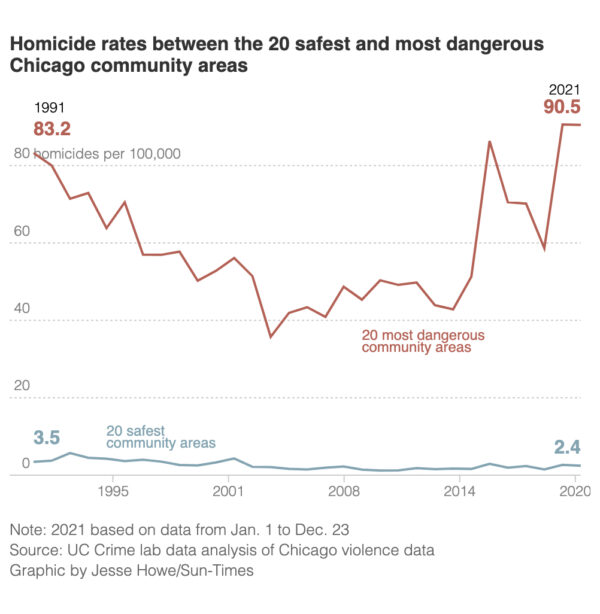 *I wanted to write “SVU” here as a fun Freudian slip, but my editor probably would delete it. Dick Wolf produces both shows.

Joy Behar Blasted For ‘Incredibly Rude’ Behavior On ‘The View’