SmackDown In A Nutshell: A Freaky Friday For The Blue Brand

It's another SmackDown in a Nutshell, and to end the week we have a freaky Friday for the blue brand...plus Riddle and Reigns!

We end the week with another SmackDown in a Nutshell, and we embrace the reality that it’s been a freaky Friday for the blue brand.

Actually, forget about it being a freaky Friday for the blue brand. It’s been a bizarre week.

Or at least, it’s certainly been a most unexpected 48 hours or so.

The rumors that Sasha Banks was released…or was she.

Stephanie McMahon is back, because her dad did a bad thing. And yet…no one is shocked, I suppose.

So, we arrive at this SmackDown in Minnesota, and it’s a freaky Friday for the blue brand.

Aside from all the drama and craziness…we have a couple (at least) interesting matches this week.

For one, Corbin and Moss in a Last Laugh match. And, our main event…Roman Reigns defends the unified belts against Riddle.

So…it’s not all going to be freaky. Some of it should actually be fun.

Let’s get into this week’s….

SmackDown In A Nutshell: A Freaky Friday For The Blue Brand

It’s time to crack open this Nutshell and enjoy the fun!

Even before taking it in, you knew this would be the main event.

Riddle is on an incredible run, doing great work. Reigns…well…that speaks for itself.

There’s a reason this was the main event.

Not a match. How about Vince’s speech.

Or, “speech”, because he said a handful of words and left.

For those of you who didn’t tune into Smackdown…… here is all Vince McMahon said. pic.twitter.com/hY1Levq4JR

When it came out that McMahon would be on the show after stepping down, and that he’d be speaking?

Yep…that was not what I expected.

Gone for a few weeks, Roman Reigns was missed…but did not miss a beat.

But make no mistake, even though he surprisingly took a clean loss, Riddle looked like he belonged.

Reigns hitting Riddle with a spear as Riddle came off the second rope.

I mean, Roman ate an F5 too…but those two took the brunt of it.

Riddle was close…but no cigar.

Whatever. It was a waste of time, and ballsy, even for someone like Vince.

The big one was telegraphed. Honestly, I spaced on Minnesota, going more to Gable Steveson…but of course, WWE went big.

Once Riddle lost with closer to ten minutes left in the show, you knew someone was coming out.

As soon as Reigns said there was no one left, you knew someone was coming out.

And once Reigns started to exit…you knew who.

My guess, someone wasn’t quite ready to push Riddle…Orton is not going to be at SummerSlam…this is a clear (and strong) plan b.

Pat McAfee is the man. And he can wrestle, and probably will be again.

Not saying he is the king of promos. Just saying he is better than plenty of the current talent on the mic, whether doing commentary or cutting promos.

I mean, there were laughs at the end of the Moss/Corbin match…but…that’s about it.

Unrelated to the show, but related to WWE…RIP Dave Hebner.

After losing what should be the last match between them for a while, Corbin made a quick line to someone else.

As in, it would seem we might see Corbin bring Pat McAfee into the ring once again. SummerSlam is around the corner…

A week after we saw neither man qualify and things left us hanging, we now know that both Drew AND Sheamus are in.

We thought we’d see Max DuPri reveal his first client or clients. Tonight, he said no due to lighting…but I think he gave clues. 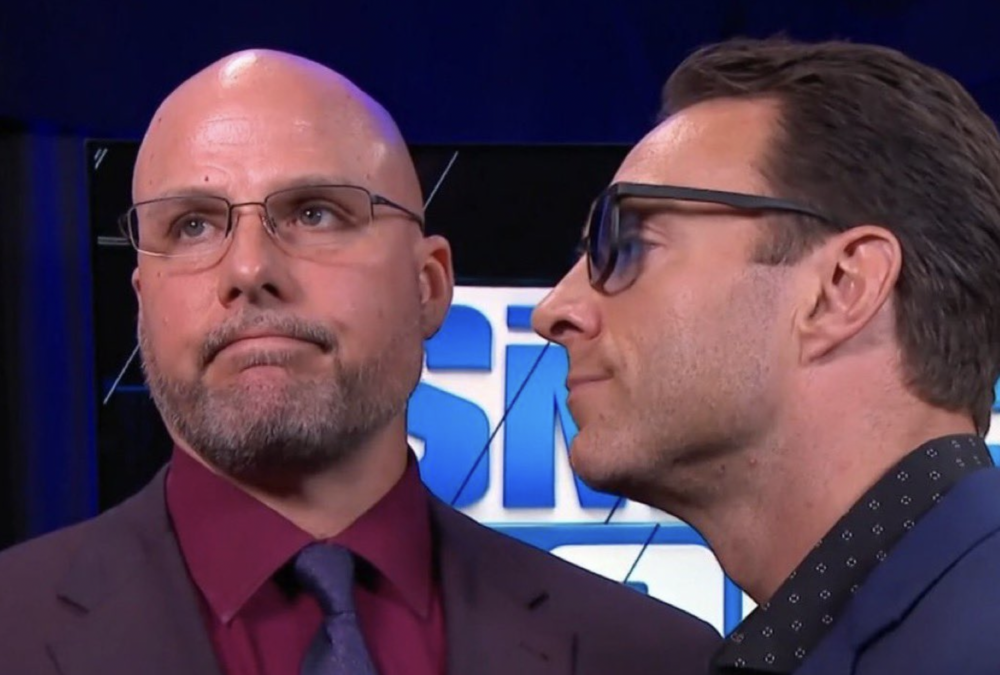 Why do I feel like his first clients will be Pretty Deadly? The fact the duo had an insanely short NXT tag title run makes me think it makes sense.

Vince. Being there was bad enough…and then he said…pointless drivel.

You knew it was happening, but it is now officially official:

The Undisputed WWE Tag Team Championship will be on the line at WWE #MITB! @WWEUsos @MontezFordWWE @AngeloDawkins

Riddle and Reigns was great.

Lesnar taking out all three of the Bloodline was better.

I would have liked WWE to tease Gable Steveson, given how much hype the young man has had…but not yet.

Surprised WWE takes Riddle out of the equation for who can challenge Reigns, but I suppose that is what the briefcase or Royal Rumble wins are for.

Not surprised in the end when Lesnar came out. WWE has some top of the card issues, and Brock certainly heats things up for the summer.

The company does need to boost younger, fresher faces (Gunther is one, Riddle another…waiting to see guys like Stevenson and eventually Breakker land in the main brands).

But, for now, a freaky Friday for the blue brand didn’t turn out too bad.