For WWE's biggest weekend of the year, it's time for WrestleMania 38, Night One. That's right folks, the hits and misses are here!

WWE’s biggest weekend of the year is in full swing, and with it, we have WrestleMania 38, night one-the hits and misses are right here!

I mean, it wouldn’t be a big show…err…”premium live event”…without the hits and misses, right?

Well, for you maybe. For me, nope.

And, it should be a big weekend. Everything is bigger in Texas right?

And…as noted, this is only WrestleMania 38 night one. We get to (or have to?) do this again on Sunday.

So, let’s dive right in and go through the top hits and misses for night one, shall we?

Rick Boogs and his injury

Not at all the WrestleMania moment that Rick Boogs may have dreamed about…but it’s the moment he got.

Boogs was attempting to hoist not one, but both Usos on his shoulders when his right leg gave out.

It looked like a legit injury the minute it happened. Later during the show, it was on-air confirmed that Boogs ruptured his quad.

Best wishes and a speedy recovery.

This could be taken any number of ways.

I had no issue with the tag title match out first…except plans likely rapidly changed due to the above injury.

Corbin and McIntyre wasn’t bad…but it didn’t move needles. Even the sword through the ropes bit at the end didn’t mean much.

Having Becky and Bianca go fourth? The two are both former-and recent-main event winners at WrestleMania.

Now, I get it. Steve Austin, in Texas, is returning. No arguing that placement.

This one…just wasn’t that great to me.

Now, I don’t know if Flair winning is indicative of Ronda not hanging around too much?

Like, we know she came back, but is she on a limited number of appearances?

Very surprised Rousey didn’t win…but the match, either way, was nothing special.

The way it went, I was waiting for a Little Naitch turn to fully allow Flair to win.

I can hear you now…dude is grasping at straws if he’s picking on the stage…right?

I actually dig it, massive video board and all that. While not the stage, per se, I like the video boards in the guardrails too.

My gripe? Last year we had a pirate ship on the stage.

This year was kind of plain in comparison.

Knowing next year is in Hollywood, I am going to bet the LA stage is impressive.

Or is it just me? Maybe the night one misses weren’t that bad?

Ready for the fun stuff?

I mean, to be fair, think about it. If one of my misses, of only a few, is that the stage was uninspired?

That is a good thing, right? Sure.

So, up first for our hits from WrestleMania night one?

The obvious has happened. Rumors were spot on.

Rhodes, who left the company six years ago to do a lot of exciting and innovative stuff? He has returned.

Was it a perfect, 100% clean match? Absolutely not.

There were some botches, things were not perfectly crisp.

But Rhodes is back, and he and Rollins worked an absolutely instant WrestleMania classic.

Or, put another way…Covid is over?

Sure, last year we saw a lot of fans back to WrestleMania…but it was not a full stadium.

There was still social distancing to contend with. Not so much this year.

Now, night one did an announced attendance of just under 78,000 fans. I believe (and I did not look this up) that the last ‘Mania in Dallas (a single night) did over 100k.

Still, if they manage close to 160k fans in Jerry World across Saturday and Sunday? That’s pretty good.

And more important? WrestleMania is just so much better in front of a packed house.

Best title match on the show for night one. Maybe best match, too…but there are a few options.

Miz turning on Paul at the end of things wasn’t super surprising. I actually had expected Paul to turn on Miz, like how Tyson did to DX.

Instead, it was what we got, and I presume this sets up a big Paul/Miz clash in the future.

Stone Cold Is Back

Would have been cool if it was actually a match, but I get it. 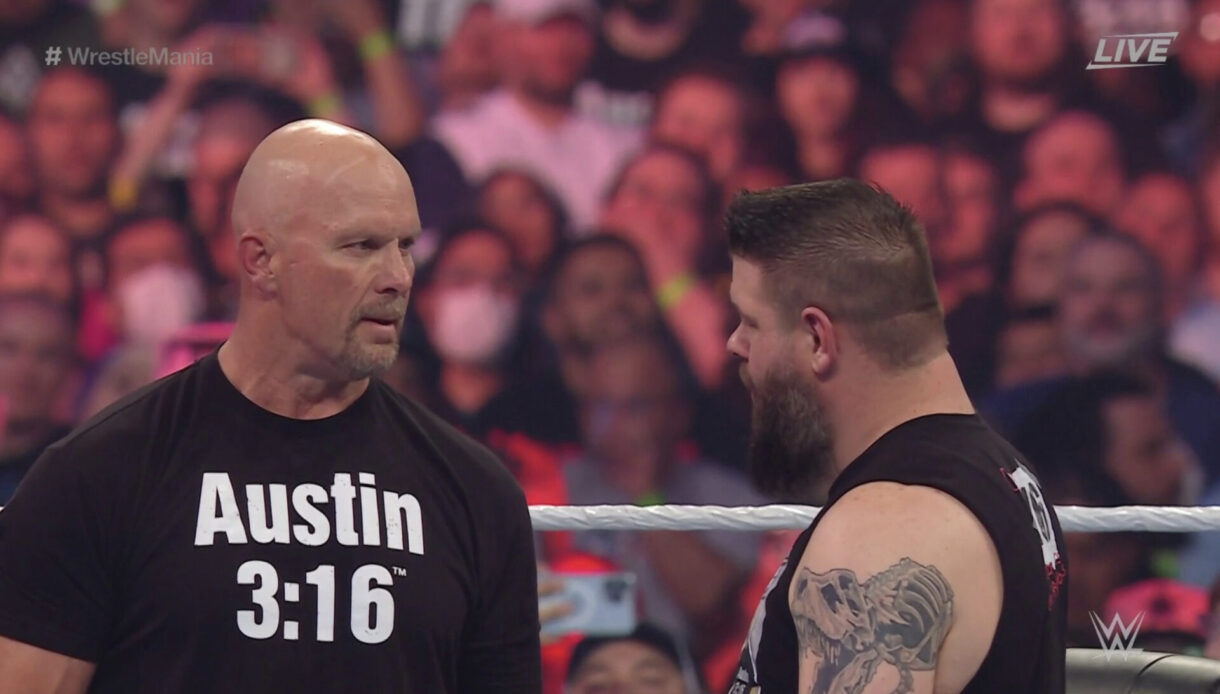 To be fair, if they just did a KO Show to kick off the event, and had Austin not be announced? That would have worked too.

Love seeing him back…but still weird to me that they positioned a talk show segment as the night one main event.

Of course…it morphed into a match, as just about anyone could have figured out by how things were going…but…here we are.

And, not really a match…no holds barred, plenty of beer, and a semi-impromptu last match for Austin.

Kind of wish they just set it up as a match to begin with…but it is a way to send fans home happy from night one, to be sure.