The One Thing Willie Nelson Will Never Give Up

Willie Nelson was recently asked if he would depart with one of his greatest loves and his answer shouldn't be a surprise to his fans.

Willie Nelson is 88 and still going strong as evidenced by the release of his 95th studio album, The Willie Nelson Family. He can’t tour like he used to, but his music is as crisp as ever.

But in his late 80s, is Willie at the point where he needs to start making sacrifices? Not quite. Here’s what Willie said he would never ever give up and it isn’t what you’d expect.

Via Today with Hoda & Jenna:

“If you had to get a haircut or a new guitar, what would you choose?” the ‘Today with Hoda & Jenna’ host asked.

Without hesitation, he said, “I’d cut the hair off, and it’ll grow back.”

The treasure is Willie’s Martin N-20 classical acoustic guitar, Trigger, that he bought in 1969.

The well-worn instrument covered in faded signatures is never far from his side and his as a part of him as much as his long hair and his proclivity for enjoying the devil’s cabbage.

Willie Nelson and Trigger
‘The best duo from Texas’

Related: Willie Nelson’s Music Video About Cowboys Will Have You Longing For The Days Of John Wayne

I Know What You’re Thinking…

But would you ever think Willie would give that up? You’d have to be high-ly unaware of Willie and his attachment to his beloved Trigger.

Heck, Willie even cut his hair once in 2010 and sported some weird bob.

I’m going to take a shot in the dark and speculate Willie was under the influence when he made that decision.

On that note, let’s examine Willie Nelson and his popularity among conservative country music fans.

Why We Love Willie Nelson

Is there anyone who doesn’t love Willie Nelson, especially in Texas? The Lone Star State’s love for Willie defies convention. Texas is a conservative, straight-laced state and Willie is well…he’s Willie.

Just look at this picture of Nelson with President Clinton. I bet Bill had no problem inhaling on this day. 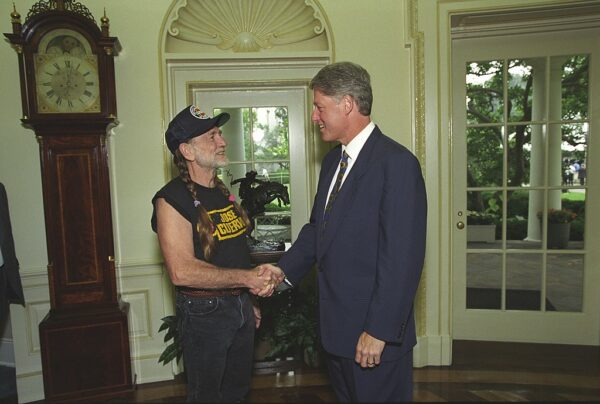 But Willie is so popular because everyone in their life has someone like them in their family. Everyone in Texas has that one cousin, nephew, a brother who loves to smoke and doesn’t bother anyone. Willie is our beloved stoner cousin.

Hit the @ button quicker than Willie Nelson smoke a pound a bud pic.twitter.com/wi2LMvnCLt

But on a serious note, we love Willie because he is who he is. He’s a rebel and a singular individual. Deep down, no matter if we disagree with his politics or his hobbies, we can all admire someone who marches to strum of their old guitar.

Willie is the last of a dying breed. In an era when every musician’s personality is perfectly curated and managed, The Red Headed Stranger comes from an era when you were just yourself on stage and in life.

No PR team, no social media intern writing all your tweets. Just a guy with long braids, a guitar, and a few blunts here and there.

Now transport yourself back in time by watching the official music video for “Always On My Mind” by Willie Nelson. Forever a classic.

Are you a Willie Nelson fan? Share this story to spread the love!