Over the last year, the Pentagon dumped a lot information on UFOs interacting with US military aircraft. The public response has been muted.

The truth is out there. Or is it? Over the last year, the Pentagon dumped much information on UFOs interacting with US military aircraft. The public response has been surprisingly muted. With the government all but confirming interactions with aircraft they can’t identify, the public has been mostly MEH about the whole thing.

But perhaps that will change with a new tell-all from former Pentagon UFO official, Luis Elizondo. Elizondo, who ran the Pentagon’s effort to study UFOs in the Advanced Aerospace Threat Identification Program, is set to publish a tell-all book with “profound implications for humanity. More from Elizondo via Hollywood Reporter:

“The American people now know a small portion of what I and my colleagues in the Pentagon have been privy to: That these UAP (unidentified aerial phenomenon) are not secret U.S. technology, that they do not seem to belong to any known allies or adversaries and that our intelligence services have yet to identify a terrestrial explanation for these extraordinary vehicles. This conversation is only just beginning.”

In their June 2021 Report, the Pentagon offered several explanations for what these UAPs might be. Some might have been birds, plastic bags, unknown aircraft from another country, or the ominously labeled “Other.” 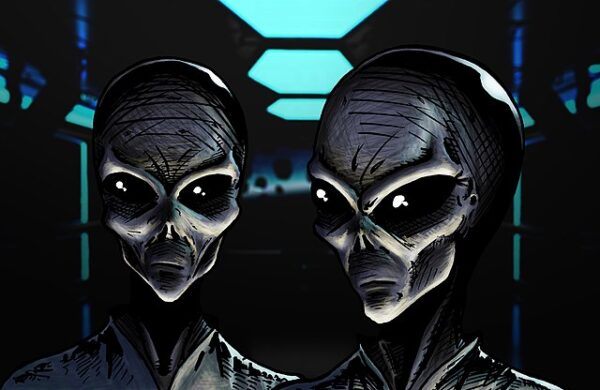 Of course, when you hear the phrase “UFO,” you instantly think aliens from another planet. While aliens may exist, we have had no official contact with them.

Why is that? Some would say, “well, aliens aren’t real,” but there is another more plausible explanation called the Fermi Paradox.

The Fermi Paradox states that there are billions of stars similar to our sun, billions of which have Earth-like planets around them. As such, it is implausible that we haven’t even seen evidence of life on another planet.

There are actually a lot of reasonable explanations for the lack of visitation.

For example, much like ours, another planet probably hasn’t invented the capabilities needed to travel the thousands of light-years to get to Earth.

But between aliens or plastic bags, there is another quite simple explanation: the government is lying to us.

It shouldn’t shock you when I say that the government has a history of being less than truthful with us, especially when it comes to military aircraft.

From the stealth bomber to a new secret space plane, the government routinely denies and obfuscates the truth behind some of its most top-secret projects.

So what do I think is happening?

I think that some intrepid UFO fanatic FOIA requested a bunch of declassified videos on “unexplained aircraft interactions.” But instead of admitting that we are developing crazy technology , the government went with the “yea; it’s probably aliens” excuse.

And of course, most of America either bought it or didn’t even care. We’ve been through a pandemic in the last year, so the government maybe decided to give us a little treat as a distraction.

In July of 2021, 50% of Americans believe that UFOs can be explained away as human activity or natural phenomena.

But what is more interesting is that that number is down from 63% in 2019. People want to believe in aliens.

I Want To Believe

As improbable as it is that we have interacted with aliens, I want to believe we really have.

Elizondo first broke the Internet when he sat down with 60 Minutes.

Watch the segment below:

Do you think UFOs are real? Sound off in the comments.