Bobby Lashley's won the WWE Title on RAW, and the wrestling community has reacted on Twitter. Also, AEW releases its first-ever mobile game.

It has been 16 years in the making. Last night on RAW, Bobby Lashley’s WWE Title was an incredible storyline to watch unfold. Afterward, he, the Hurt Business, and his fans celebrated. Peers in the wrestling community also reacted on Twitter.

It’s been a long road for Bobby Lashley to get to this point. Lashley started with the WWE in the mid-2000s. He’d step away from the company for over a decade in 2008.

During that time away, he did some major things with other promotions. He also scored some major championships.

Lashley’s returned to the WWE in 2018, there were high hopes for him. Unfortunately, his initial comeback lacked luster.

He’s always had that WWE title on top of mind. After a long road, his dream finally became a reality.

During the close of Monday Night RAW, Lashley defeated The Miz to become the new WWE Champion.

Lashley had the “run around” over the years when it came to getting a WWE title shot. Last night was no exception, as the Miz had plenty of excuses as to why his match against Lashley should be canceled.

Miz was finally cornered into the ring at 10:50 p.m. in a lumberjack match against Lashley. After a Spinebuster and the Hurt Lock, Bobby Lashley finally became WWE Champion.

It took time for the match to happen, but it did not last long.

Nobody tries to put you right THROUGH the ring quite like Bobby Lashley.

Now, get a cat already and you’ll be on the absolute top of the world.

AEW Casino: Double or Nothing has officially been released. This is the first-ever mobile game created by AEW. It is currently available for free on the Apple Store and Google Play. 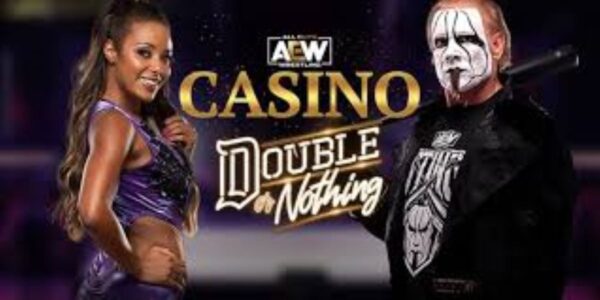 The new game was collaborated on with KamaGames. The company is a social casino developer. Double or Nothing is the first of three games set to come out under the “AEW Casino” brand.

Players choose from ten different games and compete in weekly tournaments. Trophies, chips, and leaderboard dominance are some of the things players are aiming for.

The game also has a chat system so players can communicate with other people in the game. There’s a feature where a casino can challenge another casino directly in differing tournaments. Up to 1,000 players can compete at once.

“Working closely with KamaGames, it’s easy to see why they’re a leader in the global social casino space with more than 150 million players.

In launching AEW GAMES, our mission is to deliver a vastly superior gaming experience for wrestling fans, starting with two mobile games and a revolutionary console game.

We think that AEW Casino: Double or Nothing is poised to become the best wrestling-themed mobile casino offering in the world.”

Below is a trailer for a new mobile game, AEW Casino: Double or Nothing.