Braun Strowman has been off TV and here is the latest on what is going on. And, WWE is likely booking two Elimination Chamber matches.

Due to an infection that got into his blood, Braun Strowman is currently on the sidelines. Also, it seems like WWE will have two Elimination Chamber matches, but they will not feature women.

Braun Strowman Out Of Action

There are plenty of big men type wrestlers in WWE, but Braun Strowman easily stands out. Naturally, people have wondered where he has been lately.

After being off TV for a bit, he returned at the Royal Rumble. While he did not win or toss out a stack of wrestlers like in the past, he made some noise.

In a post on social media, Strowman revealed that he is suffering from an infection that got into his bloodstream. Because of the illness, he fell ill and quickly lost weight.

Braun Strowman gives an update on why he’s been off TV again.

Says he recently got an infection that went into his bloodstream and it caused him to drop like 15 pounds in 5 days.

Hope he has a quick recovery! pic.twitter.com/ZNdtkIBDLC

“So, a little update,” said Strowman. “I’ve been gone for a bit. I’ve been really sick over the weekend. I got really sick.”

“I got an infection that got into my blood system and I had to be put on antibiotics for that. It was awful. I’ve dropped like 15 pounds in 5 days.”

“I couldn’t eat and all that. It looks like there’s 50 pounds of water weight on my joints.”

“They’re all swollen and inflamed. The antibiotics are working and I’m getting better. Gonna get back to training and get that mask back on and I’ll be seeing you very soon.”

Based on the video message, Strowman seems excited for a return to TV. In addition, there is no word on how long he will be out of action.

2020 was a wild year for Strowman. He was not even booked for WrestleMania 36, but walked out Universal Champion.

When Roman Reigns opted out of the event 10 days before it aired, WWE scrabbled. In the end, Strowman pinned Goldberg to claim the title.

He defended it for a few months and then got trapped in The Fiend’s world. Once Reigns returned at SummerSlam, the belt was quickly put on the newly turned heel.

Afterwards, Strowman was booked in random storylines. Frequently, he went from face to heel with no explanation.

WrestleMania season is here, so nobody wants to miss out on the big payday. Strowman lucked out last year and maybe history reports itself. 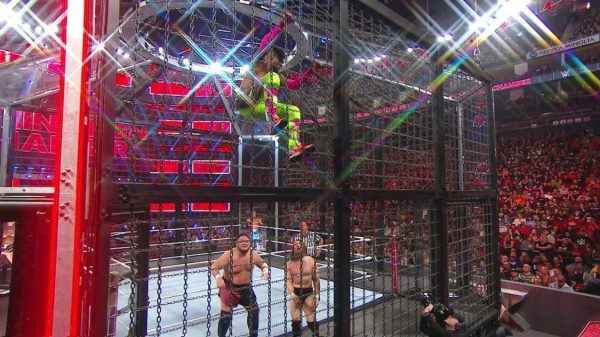 In a little over a week, WWE presents the Elimination Chamber. Currently, there is only match booked to take place inside the steel structure.

That matches sees Drew McIntyre defend his title against five opponents. As for SmackDown and Universal Champion Roman Reigns, he is not officially booked.

The belief is WWE will announce his match tonight during SmackDown. Therefore, the obvious choice is Reigns defending his title against five wrestlers from the blue brand.

But, that would mean the women will not get a chance to compete inside the Elimination Chamber. For the past three years, women have fought inside the structure.

If the Universal Championship is decided in the Elimination Chamber, then adding a third seems doubtful. It would be too much of the same gimmick and leave no time for other matches.

In conclusion, it seems like the female superstars are getting the raw end of the deal.